OTTAWA — A man who is challenging Canada's policy that prohibits sexually active gay men from donating blood wants to know why the Trudeau government is trying to block his case, despite a 2015 Liberal pledge to end the ban.
May 18, 2021 5:07 PM By: Canadian Press 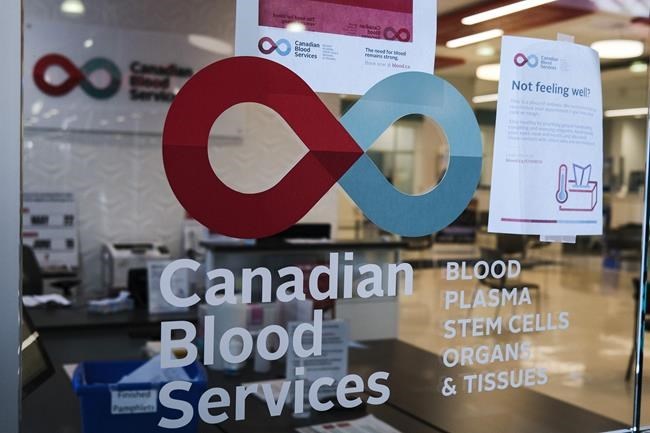 OTTAWA — A man who is challenging Canada's policy that prohibits sexually active gay men from donating blood wants to know why the Trudeau government is trying to block his case, despite a 2015 Liberal pledge to end the ban.

Christopher Karas brought a human-rights complaint against Health Canada in 2016 and three years later the Canadian Human Rights Commission decided to refer the matter to a tribunal for a more substantial probe.

But the federal government has since launched a judicial review to stop the complaint from going further, arguing that it is about a policy not set by Health Canada, but rather by the Canadian Blood Services — an arm's-length agency.

Karas says he is confused and upset Ottawa is challenging his case, especially since Prime Minister Justin Trudeau has promised repeatedly since 2015 his government would end the gay blood ban.

"I was caught off guard when I saw the application for judicial review because it was my impression that the federal government wanted this policy to be eliminated. But we're seeing here the complete opposite," Karas said in an interview.

"From the very beginning, I've felt of very little value, I've felt that I can't contribute and this was just confirming that … I would have thought by now we would have made more progress."

The policy of excluding men who have had recent sex with men (MSM) from donating blood or plasma — originally a lifetime ban — was implemented in 1992 after thousands of Canadians were infected with HIV and hepatitis C through tainted blood products.

Donor eligibility criteria has changed since then, including in 2019 when Health Canada approved requests from Canadian Blood Services and Hema-Quebec to decrease the deferral period of the time men must abstain from sexual activity with other men before donating blood from one year to three months.

Trudeau has pledged multiple times since 2015 to eliminate the gay blood ban and to date his government has committed $3 million toward research on moving toward more behaviour-based donation policies.

But despite repeated calls from health and LGBTQ2S advocates and despite an explicit mention of Trudeau's promise in Health Minister Patty Hajdu's mandate letter, no further policy changes have materialized.

In its legal application to the Federal Court, the government argues it is "not a proper party to a complaint about the MSM policy."

"Health Canada does not require, implement or administer the MSM policy or any other blood screening policy," the federal government says in its judicial review application.

It further argues the independence of the blood agency from the federal government from political interference is "a cornerstone of Canada's blood system" and was one of the key recommendations of the Krever Commission, launched in response to Canada’s tainted blood scandal.

But Karas's lawyer, Shakir Rahim, argues this argument doesn't hold water because Health Canada is the regulator for the country's blood system, and therefore has a role in the Canadian Blood Services' policies, including the MSM ban.

"They're trying to say that the actions of Health Canada as it relates to the blood ban should just not be examined at all, and that raises a lot of concerns, particularly because it is this government and its successive ministers of health, that have taken a position that they are going to end the blood ban," Rahim said.

"(This) sets up a bit of a contradiction that we think is at the heart of the problems with the government's case here."

The issue has been raised multiple times over the years by opposition MPs in the House of Commons, including last week during question period.

"This is harmful and upsetting to the gay community. That is clear and the Liberals know it," Singh said.

"Why did the prime minister campaign on withdrawing this ban when he is now defending it in court?"

Deputy Prime Minister Chrystia Freeland said she "agrees that this is a discriminatory practice that is hurting a lot of Canadians" and promised Ottawa is "working very hard right now to eliminate it."

"At the same time, we respect the independence of Canadian institutions, especially when it comes to medical and scientific issues."

The judicial review is scheduled to be heard in Federal Court on May 27.