OTTAWA — Conservative leadership candidate Erin O'Toole is adding his voice to the chorus of people calling for the June 27 vote to be delayed.
Mar 22, 2020 5:11 PM By: Canadian Press 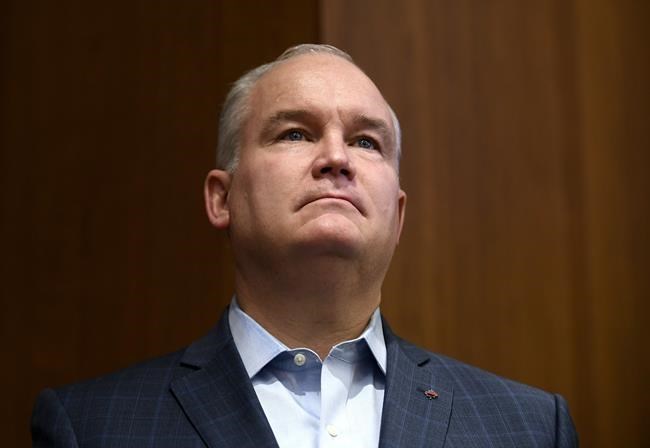 OTTAWA — Conservative leadership candidate Erin O'Toole is adding his voice to the chorus of people calling for the June 27 vote to be delayed.

O'Toole, the former cabinet minister and current MP, said all Canadians need to focus on COVID-19 response, including his own campaign team, the party's MPs, and grassroots members.

In a video circulated Sunday, he called on his supporters to devote what resources they have to the needs of their communities.

"I'm not leaving the race. In fact, I believe we will win it. But today, I'm proposing that we put the needs of our fellow citizens first," he said.

O'Toole is the latest contender to suggest the party needs to delay the race, and the second of the four people already on the ballot to make that request of the party.

Late last week, Ontario MP Derek Sloan, who is also on the ballot, called for all the deadlines, including the April 17 cut-off to sign up new members, and the upcoming March 25 cut-off to meet the entry requirements, to be pushed back.

Lewis said Sunday she doesn't think the race should be called off until the organizing committee decides the contest is logistically impossible. She said she thinks the party requires a leader who will be battle-tested.

"The next leader of our party is going to be required to show leadership in a time where Canada is still in the valley created by this pandemic," she said in a statement.

MacKay's campaign said in a statement that they were the first to suspend in-person campaigning. They have been using technology to continue to talk to party members, and said any decision on the rules or timing of the race are up to the party.

Ontario MP Marilyn Gladu is the only contender still actively striving towards the March 25 deadline — as of Sunday afternoon she was still requesting donations — though she had called weeks ago for the contest to be delayed.

Potential candidate Rick Peterson dropped out last week, citing the impossibility of getting the funds and support from party members at a time when people are worried about practical issues, not politics.

Another, Rudy Husny, remains on the ballot but has also stopped campaigning for the same reason, saying if the party wants to disqualify him on Wednesday, they can.

Both had previously demanded the party change the deadlines.

Another potential candidate, Jim Karahalios, was disqualified from the campaign on Friday, in connection with claims he made about the O'Toole campaign. He claimed in an email to supporters Sunday that his disqualification was unlawful and not in accordance with party rules. His name, however, remains off the party's list of official candidates.

In an interview with The Canadian Press late last week, outgoing leader Andrew Scheer declined to comment when asked whether the contest should continue.

He is set to step down as leader when his replacement is chosen.

Scheer said he knows the party's national council and leadership organizing committee are aware of the challenges posed by the pandemic.

"As you can imagine in a leadership race, changing rules or deadline or dates has the potential to have major ramifications," he said.

"And they are very, very focused on making sure there is a level playing field for all candidates."

The leadership committee has made some minor tweaks to the contest; debates scheduled for April will be held without an audience, and online portals have been set up to make membership submissions easier.