WASHINGTON — Canada needs to be a central player in American efforts to recover from the COVID-19 pandemic, Mary Ng said Tuesday as North America's trade emissaries sat down to work out the fine points of the new U.S.-Mexico-Canada Agreement.
May 18, 2021 9:20 PM By: Canadian Press 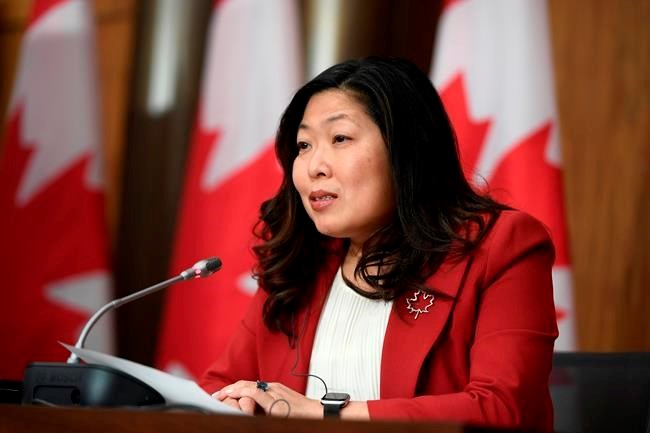 WASHINGTON — Canada needs to be a central player in American efforts to recover from the COVID-19 pandemic, Mary Ng said Tuesday as North America's trade emissaries sat down to work out the fine points of the new U.S.-Mexico-Canada Agreement.

"It was incredible and historic to have three women representing North America's trade relationship for the first time," Ng told a news conference after the meeting.

The main goal was to codify the implementation and enforcement of the agreement's provisions on protecting workers and the environment, two of the biggest complaints about its NAFTA predecessor.

The three countries "held robust forward-looking discussions" on those provisions, the commission said in a joint statement.

"These commitments set the standard for future trade agreements and should serve as examples to advance workers' rights and the nexus between environmental issues and trade."

In her opening remarks to the commission, Ng emphasized the role Canada stands to play in the U.S. effort to recover from the COVID-19 pandemic, a nod to concerns north of the border that President Joe Biden's labour-friendly protectionist stance risks freezing out Canadian suppliers and contractors.

"Our trade relationship is built on long-established, deeply integrated supply chains — networks of workers and businesses that aren't just selling to each other, but innovating and building together," she said.

"Many of our traded goods cross our borders to become the final 'North American' products that we buy and sell from each other and around the world. That is why our trade relationship is so important."

Not surprisingly, officials from both the U.S. and Canadian sides of the table spoke in glowing terms about the spirit of co-operation and common cause at the meeting, largely gliding past the various irritants — some long-standing, others more modern.

Ng said she defended Canada's plan to impose a three per cent digital services tax on foreign streaming services like Netflix and Spotify, a measure the U.S. opposes around the world as an unfair penalty on American innovation.

"I shared with (Tai) our government's commitment to ensure that businesses in all sectors, including digital corporations, pay their fair share of taxes," Ng said.

Canada would prefer to be acting multilaterally alongside members of the Organization for Economic Co-operation and Development, where efforts are underway to establish mutual, international standards for digital taxation, she added, but will do what it must in the meantime.

"We certainly are committed to ensuring that everyone pays their fair share."

Ng pointedly refused to say whether Tai or other USTR officials threatened to impose tariffs or other trade penalties on Canada as a result, a threat it has levelled at other jurisdictions, including Austria, Italy, Spain and the U.K.

She also sidestepped questions about U.S. sabre-rattling on how Canada has been allocating its tariff-rate quotas — the quantities of certain dairy products like milk, cheese and yogurt that can be imported at lower duty levels.

U.S. trade officials and dairy industry advocates say a large share of those quotas have been allocated to processors rather than producers, denying U.S. farmers access to the supply-managed Canadian market the USMCA is supposed to deliver.

Tai's USTR predecessor, Robert Lighthizer, initiated a complaint process late last year on the grounds that Canada was trying to game the system. Tai has not shown any sign she plans to ease up on the pressure.

"Canada takes our international obligations very seriously," Ng said. "In dairy, we believe that we are meeting our obligations ... to the dairy farmers and to our strong supply-managed sector."

Tai is under mounting pressure to lift U.S. tariffs on Canadian softwood, a long-standing measure that reflects the American view that Canada's forestry producers are unfairly subsidized through federally set prices for Crown timber.

Former president Donald Trump's administration imposed a 20 per cent tariff on Canadian softwood in 2018, before the onset of the COVID-19 pandemic, but lowered it to nine per cent late last year after a decision by the World Trade Organization.

Lumber prices in the U.S. have tripled over the past year, thanks to pandemic-fuelled constraints on production and soaring demand for housing.

"Canada reiterated that a negotiated agreement is in the best interest of both countries," Ng said, striking a tone that suggests an opportunity for a deal is within reach.

"We have been clear that the duties imposed by the U.S. on softwood are both unwarranted and unfair, and they do hurt workers, both here in Canada as well as in the U.S. But we continue to (want) to work with the U.S. on this very important issue."

Tai opened the meeting by emphasizing the importance of making sure the USMCA benefits "everyday people" in all three countries, and not just those already wealthy enough to capitalize on it.

"For too long, the focus has been on 'global value chains' as a proxy for maximizing efficiency. That efficiency has proven to be detrimentally expensive," Tai said in her written remarks.

"Not only have we discovered the fragility of our supply chains, but we have just begun to appreciate the degree to which they run counter to our collective goals of ensuring that workers within North America, and outside it, are paid a fair wage, in a safe workplace."

Coincidentally, as Tuesday's meetings were taking place, Biden was singing the praises of his economic recovery strategy in Michigan, where he again insisted he would aggressively enforce efforts to make sure U.S. tax dollars benefit U.S. workers.

"I'm not (granting) a single contract to a single company that does not hire Americans, have all-American parts and has a supply chain that is an American product supply chain," Biden said.

"That's not violating any trade agreements. It's been the law since the 30s, but no one's had the courage or the nerve to insist on it being applied."