B.C. residents who had AstraZeneca vaccine can choose second-dose vaccine

VICTORIA — British Columbians who've had a dose of the Oxford-AstraZeneca vaccine will have the option of choosing their second shot within a four-month interval, the provincial health officer says. Dr.
May 17, 2021 8:23 PM By: Canadian Press 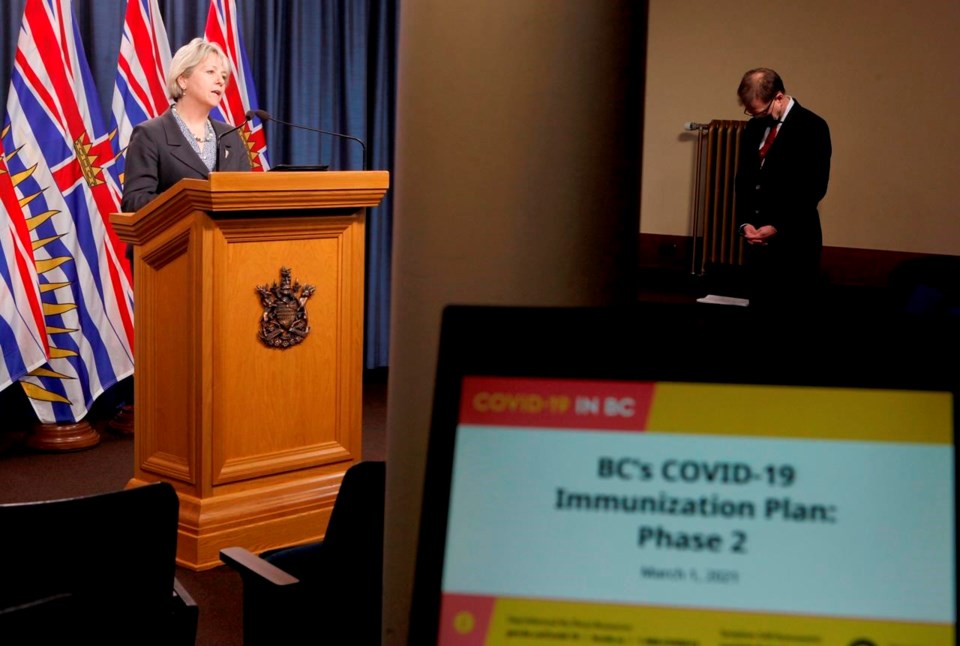 VICTORIA — British Columbians who've had a dose of the Oxford-AstraZeneca vaccine will have the option of choosing their second shot within a four-month interval, the provincial health officer says.

Dr. Bonnie Henry said Monday that 20,000 doses of the AstraZeneca vaccine are set to expire at the end of June and were reserved for people who, for a variety of reasons, may not be able to get an mRNA vaccine such as the one made by Pfizer-BioNTech.

However, further data are expected by the first week of June from a study in the United Kingdom on the effectiveness of switching vaccines for the second dose, and Henry said that information will be shared with B.C. residents.

"I ask people to be patient," she said. "We know that we have some time in which your immune system is developing its protective response to your first dose," she said of evidence from the U.K. and other countries suggesting it may be more beneficial to wait up to 12 weeks for the second dose.

"You will have the option of receiving the second dose of AstraZeneca and we have stock coming in to be able to support that. Or you can take the information once we have it and make your own decision about what you want for your second dose."

An increase in the supply of vaccines in the coming weeks means everyone can expect to have their second dose moved up following a strategy that allowed for more people to get their first doses in order to provide greater community-wide protection, Henry said.

British Columbia reported on Monday 1,360 cases of COVID-19 over a three-day period. Fourteen more people died, for a total of 1,648 fatalities, including one person in their 40s and another in their 50s.

Over 55 per cent of B.C. residents have now received their first dose of a vaccine, while three per cent, or 130,023 people, have had their second shot, she said.

Details about vaccination of children aged 12 to 17 are expected to be announced later this week.

Henry said COVID-19 restrictions will not be eased by the Victoria Day long weekend to allow any non-essential travel as protective measures such as wearing masks must continue, even as more people are being immunized.

"We now have 400 to 500 people a day that are still testing positive for COVID-19. And that reminds us that the virus continues to circulate and we have to do what we can to stop those transmissions as we are all developing this protection. We can't be travelling and we can't be having large gatherings this weekend."

Four extra vaccination clinics have been set up in Surrey this week to ramp up immunizations in a COVID-19 hot spot with a high number of essential workers.

The first 1,000 people to show up will be given wristbands for same-day appointments at the clinics, and residents aged 18 and up must present identification proving they live in Surrey, the Health Ministry said in a release.

Everyone in B.C. aged 18 and up can now book an appointment to get immunized as part of the province's age-based approach.

An independent COVID-19 modelling group said continuing restrictions such as a ban on indoor dining until June 15 would keep case counts low, while reopening too soon could risk a surge.

Sarah Otto, a professor at the University of B.C. and a member of the modelling group that includes researchers from Simon Fraser University and the University of Victoria, said behaviour changes such as a ban on indoor dining and social gatherings inside were probably the two most important factors in driving down cases.

However, an uptick in vaccinations last month helped lower transmission of the virus in areas like Whistler before more widespread immunizations elsewhere in mid-April, leading to fewer cases two weeks later as immunity developed, she said.

"We're now seeing vaccines make a big difference and it is causing the case numbers to decline even faster," she said.

— By Camille Bains in Vancouver

This report by The Canadian Press was first published May 17, 2021.