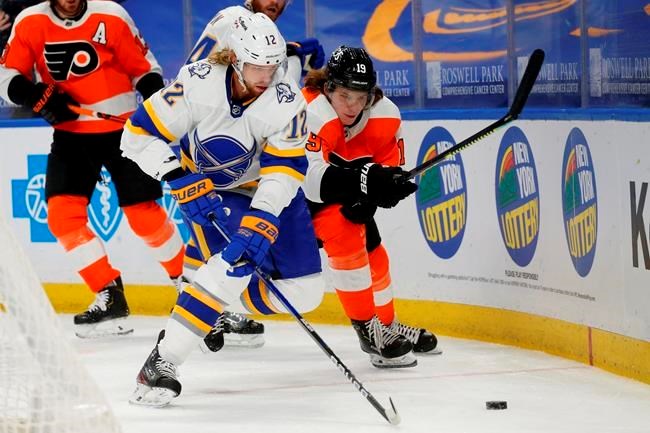 His seven-day quarantine over after a trade from Buffalo, the 36-year-old Staal was on a line with Jonathan Drouin and Tyler Toffoli at the morning skate before the Habs' game against the Edmonton Oilers on Monday night.

"It felt really good to be on the ice with these guys," Staal told reporters. "Obviously the first thing that jumps out is the talent level and the skill level. I think it's hard to gauge a lot else in a morning skate but watching the guys in a few of those games (during quarantine), they're real competitive, quick, aggressive. All the things you like to see in a good hockey team."

Staal said he had been well received by his new teammates,

"It was great. A lot of elbow bumps and fist bumps. Obviously times are a little different," he said. "It was exciting. I had some slight nerves, for sure. That's just the reality of coming into a new situation, especially mid-stream … Everybody's been phenomenal. This is an incredible organization and hockey market."

Drouin already likes what he sees in Staal.

"It's just awesome to have that veteran presence," said the 26-year-old Drouin.

"I know he's a smart player, he goes to the right areas and he plays well," he added. "So I'm excited to play (with him)."

Montreal acquired Staal on March 26 in exchange for a third- and fifth-round pick in the 2021 draft. The Sabres will also retain US$1.625 million of Staal's salary.

Going into Monday's contest, the six-foot 195-pounder had collected 439 goals and 592 assists in 1,272 regular season games over 17 seasons with the Carolina Hurricanes, Minnesota Wild, New York Rangers and Sabres. The native of Thunder Bay, Ont., won the Stanley Cup with Carolina in 2006.

The Hurricanes selected Staal second overall in the 2003 draft.

Staal had an exercise bike and some dumbbells at his disposal during quarantine, also taking part in video sessions with coaches. His days started with COVID-19 tests, with media obligations and workouts to follow. His nights were reserved for watching hockey.

"I had a routine going. Obviously it got a little bit long there Day 4, 5, 6 but the light was at the end of the tunnel." he said. "I'm happy I'm here now with this group."

"We're confident with all four lines," he said.

This report by The Canadian Press was first published April 5, 2021