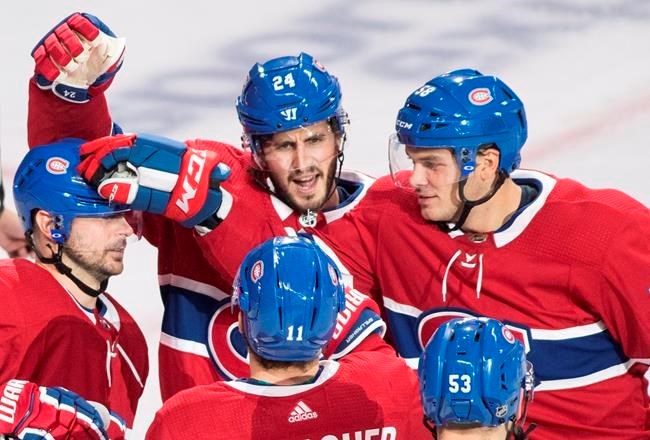 Tkachuk scored his first pre-season goal Saturday as the Senators lost 3-2 to the Montreal Canadiens.

The 18-year-old is looking to carve himself a spot on Ottawa's opening-day roster.

"He's got a lot of enthusiasm," said Boucher of the fourth-overall pick in this summer's NHL draft. "A kid that's not just physically strong. He's extremely open, very coachable. So that's fun for a coach. The minute you ask him something, he does it right away."

Tkachuk — the son of NHL veteran Keith Tkachuk and the brother of the Calgary Flames' Matthew Tkachuk — spent last season at Boston College, but hasn't looked out of place with the Senators.

"He's adapting every day and he's piling on the details and he's showing it every day," said Boucher. "He's had a terrific development camp, rookie camp and now the main camp. Up until now, it's as good as you can expect."

Tkachuk got the Senators on the board just 1:15 into the game. The streaking winger took a pass from Mark Stone as he entered the Canadiens' zone. Tkachuk found another gear as he blew past Montreal defenceman Jeff Petry before beating Carey Price between the pads.

It was Ottawa's first shot on goal.

Price finished the game with 16 saves on 18 shots.

"(Price) is considered to be one of the best goalies in the world so that's pretty special," said Tkachuk.

"I just shot it and was hoping for the best, to be honest."

The winger was also involved in Ottawa's second goal as he won the offensive-zone faceoff that led to Cody Ceci's marker at 17:41 of the second period.

Tkachuk finished with a goal and three hits in 15:52 of play.

"I was happy with the first period but it was pretty early so I have to focus on the rest of the game," he said. "I played all right but it could be a lot better. At the end of the day, we didn't win. It stings a bit."

Down 2-0, the Canadiens mounted their comeback.

Nikita Scherbak scored from a tight angle at the end of the second period after he threw the puck on Craig Anderson from the corner of the ice.

"Something like that can give a team a jump," said Scherbak. "It was a 2-0 game and we were pushing pretty hard. We had chances but it just wasn't going in."

Using a defenceman as a screen, Paul Byron netted the equalizer with a seemingly harmless wrist shot at 1:18.

New signing Tomas Tatar scored the winner 23 seconds later when he deflected Brendan Gallagher's shot from the point past Anderson.

Stone nearly tied in the game's final minutes, but his shot rang off the post.

"It wasn't exactly easy for us tonight," said Canadiens coach Claude Julien. "What I liked from our team tonight is that we found a way to win. And when you don't play your best, but you still find a way to win, that's a good sign."

Anderson, who was making his second pre-season start, stopped 29-of-32 shots in defeat.

The Senators remain winless this pre-season (0-4-0).

Montreal's next exhibition game is Monday versus the Toronto Maple Leafs. The Senators are off until Thursday, when they play the Chicago Blackhawks.

Notes: The Sens went 16:07 without registering a shot in the first period. … Montreal made its first round of cuts on Friday as they released 23 players from training camp. … The Canadiens signed Joel Teasdale and Josh Brook to entry-level contracts on Friday.

San Jose visits Panarin and the Rangers
Feb 22, 2020 3:06 AM
Calgary visits Detroit after Backlund's 2-goal game
Feb 22, 2020 3:06 AM
Toronto hosts Carolina following shutout victory
Feb 22, 2020 3:06 AM
Comments
We welcome your feedback and encourage you to share your thoughts on this story. We ask that you be respectful of others and their points of view, refrain from personal attacks and stay on topic. To learn about our commenting policies and how we moderate, please read our Community Guidelines.