PITTSBURGH — Brandon Tanev scored a short-handed goal in overtime, and the Pittsburgh Penguins handed the Colorado Avalanche their first loss of the season with a 3-2 victory Wednesday night.
Oct 17, 2019 1:19 AM By: Canadian Press 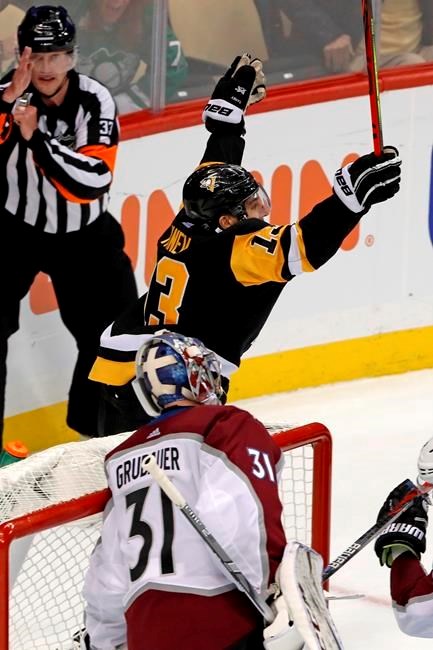 PITTSBURGH — Brandon Tanev scored a short-handed goal in overtime, and the Pittsburgh Penguins handed the Colorado Avalanche their first loss of the season with a 3-2 victory Wednesday night.

Tanev, Pittsburgh's biggest free-agent pickup in the , scored his first goal with his new team 3:57 into the extra session. He became the second player in franchise history with a short-handed overtime goal, joining Mario Lemieux on Jan. 22, 1996.

Tanev swooped into the zone and threw a shot on goal that went between Philipp Grubauer's pads. Colorado forward Gabriel Landeskog knocked the puck into the net, giving Pittsburgh its fourth straight win for the first time since an eight-game winning streak last season.

The Avalanche, the NHL's last unbeaten team, looked to start the season with six straight wins for the first time since 2013-14.

ANAHEIM, Calif. (AP) — Adam Henrique scored twice and Jakob Silfverberg had a goal and two assists, leading the Ducks to the victory.

Rickard Rakell had a goal and an assist for Anaheim, and Ryan Getzlaf scored the Ducks' first power-play goal of the season. John Gibson made 31 saves.

Buffalo entered with the league's best power play with nine goals in 21 opportunities, but was 1 for 7 with the man advantage.

WASHINGTON (AP) — John Carlson had a goal and two assists, giving the 14 points, and the Capitals earned their first home win of the season.

Nicklas Backstrom added a goal and an assist, and Jakub Vrana and Evgeny Kuznetsov also scored for Washington, which lost its first three home games for the first time since October 1983.

Michael Hutchinson stopped 28 shots in his second start for the Maple Leafs.

COLUMBUS, Ohio (AP) — Sonny Milano scored a flashy goal in the third period to help Columbus get the win.

Ben Bishop made 32 saves for Dallas, which dropped its fourth straight game. Miro Heiskanen Joe Pavelski had the goals for the Stars.

Milano made it 3-1 when he skated between two defenders and shot from between his legs to go top shelf past Bishop at 9:07.