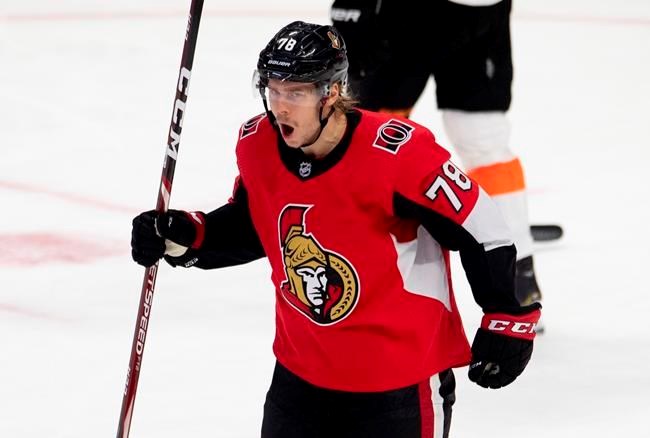 OTTAWA — The Ottawa Senators made up for a bad start with a solid ending.

Filip Chlapik's second-period goal stood as the winner, Anders Nilsson made 26 saves and the Senators killed off a late four-minute power play to beat the Philadelphia Flyers 2-1 Friday night.

Colin White took a double minor for high sticking Claude Giroux with just over four minutes remaining in the game to leave the Senators shorthanded.

The Flyers pulled Carter Hart for a two-man advantage, but were unable to get the equalizer.

"That was maybe our worst start of the year on the first three shifts," said Senators head coach D.J. Smith. "We just weren't ready or maybe they were ready, one of the two, but after that first five minutes I thought we were really competitive and played hard."

Tyler Ennis also scored for the Senators (8-10-1), who won back-to-back games for just the second time this season. Ottawa has also won four of its last five.

Tyler Pitlick scored the lone goal for Philadelphia (10-6-3), which lost in regulation for the first time since Oct. 29th.

The Flyers had a number of opportunities, but just couldn't solve Nilsson.

The 29-year-old was coming off an ugly 8-2 loss to Carolina earlier in the week but bounced back to form Friday.

"I think everyone knows right now what we, as a team, need to do to win hockey games," said Nilsson. "We can't out-skill the opponent. We have to beat every opponent every night on work ethic and we have to work extremely hard and we have to work harder than our opponents."

The Flyers had a number of opportunities to get back in the game, but struggled with the man advantage, going 0 for 5.

"Our execution was a little bit off," said Flyers head coach Alain Vigneault of the power play. "At the end the power play has the opportunity to tie us the game, had a lot of possession time in that four minutes, but no real good look that I would say."

The Senators trailed 1-0 after the first period before storming back to take a 2-1 lead after 40 minutes.

"Special teams and good goaltending got us the win," said Ennis. "The power play has been struggling lately, but it was a factor in us winning and especially the penalty kill as well."

Chlapik, with his second of the season, gave the Senators the lead late in the period.

The fourth line of Chlapik, Chris Tierney and Bobby Ryan was solid for the Senators, creating a number of chances and drawing the penalty that led to Ennis' goal.

The Flyers had a number of great chances in the first period, but couldn't get past Nilsson. James Van Riemsdyk had two scoring chances on the same shift to open the game.

Notes: Logan Brown returned to the Senators lineup after missing the last six games with an upper-body injury.

This report by The Canadian Press was first published Nov. 15, 2019.