EDMONTON — The penalty killers propelled the Edmonton Oilers to a 6-2 pre-season win over the Calgary Flames on Friday.
0
Sep 21, 2019 12:15 AM By: Canadian Press 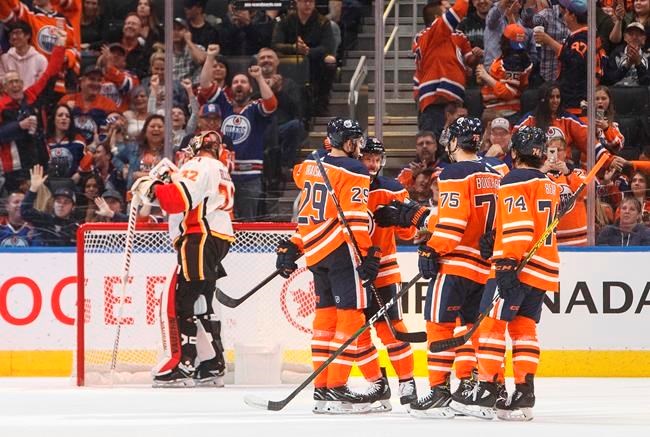 EDMONTON — The penalty killers propelled the Edmonton Oilers to a 6-2 pre-season win over the Calgary Flames on Friday.

With the Flames leading 2-1 halfway through the second period, Calgary had the chance to take a stranglehold on a two-man advantage for nearly 90 seconds. But the Oilers penalty killers held the Flames to a couple of harmless shots from the perimeter, and the game changed shortly after.

Ryan Nugent-Hopkins tied the game with a short-handed goal, another momentum-shifting moment from the penalty kill, before Joakim Nygard scored the eventual winner before the second period expired.

“If you can get one on the kill, that’s obviously a huge bonus,” said Nugent-Hopkins. “We just had that 5-on-3 and come right back with a penalty kill. So it was definitely nice to get a nice bounce there. I was able to put it in and it was a good time to do it.”

Flames coach Bill Peters said that even though hockey is a game of three periods, Friday was a game of two halves, with the major momentum swing halfway through the second.

"I think we executed much better early, and then we had trouble executing and then they spent a lot of time in our zone, and then they obviously got momentum off that short-handed goal," he said.

"We kind of backed off a little even before that, and not capitalizing on that two-man advantage obviously hurts,” said Flames centre Sam Bennett, who scored the Flames’ first marker of the night. “It's a big momentum swing and then they got a little boost and then they capitalized."

Gagner finished with three points on the night, a pre-season statement night for the veteran centre.

“That’s the way it has to be,” he said. “We’ve got a chance to do something special, and the only way to do that is for everyone to accept their role, but keep trying to push to move up the lineup.”

The Flames (2-1-1) swapped goalies halfway through the game. David Rittich stopped seven of eight shots. Jon Gillies, who has played 12 career NHL regular-season games with the Flames, surrendered five goals on 21 shots, two of them on the short side.

The Oilers (2-2-0) got on the board just 2:44 into the first period, as Alex Chiasson, who enjoyed a breakout season in 2018-19 with a 22-goal campaign, redirected a point shot from defenceman Adam Larsson.

But the Flames drew level at 7:01, on their first real chance of the game. Michael Stone’s low shot rebounded off the pads of Oilers netminder Mikko Koskinen, with the puck going right onto the tape of Sam Bennett’s stick. He had no trouble firing the puck home.

Ryan Lomberg gave the Flames the lead as he snapped home a perfect pass from Zac Rinaldo on a 2-on-1 break at the 13:30 mark.

But Gillies gave up a goal on the third shot he faced. Nugent-Hopkins’ initial pass on a 2-on-1 break was broken up, and it looked like the play was over. But the puck hung around in the slot and Nugent-Hopkins swatted the puck over Gillies’ shoulder.

Nygard was credited with the goal that gave the Oilers a 3-2 lead at 17:09 after a Gillies couldn’t corral a short-side shot from Darnell Nurse.

Kassian scored on the power play at 4:26 of the third, with a seeing-eye shot that seemed to go right through the Flames’ netminder, and Draisaitl scored at 10:10 in his first game of the pre-season.

NOTES: The Oilers were set to fly to Kelowna, B.C. after the game for a team-bonding weekend. After playing four pre-season games over the course of five days this week, the Oilers don’t play again until Tuesday night, when they host the Arizona Coyotes.... The Oilers cut their roster to 33 before the game; they included defencemen  Caleb Jones and Ethan Bear, plus winger Tyler Benson… Defenceman Brandon Davidson, who is trying to crack the Flames lineup, played Friday. He’s played 114 career games for the Oilers.

This report by The Canadian Press was first published Sept. 20, 2019

Most dangerous lead in hockey? This season, it's all of them
Jan 23, 2020 2:42 AM
Bjorkstrand, Merzlikins lead Blue Jackets past Jets
Jan 23, 2020 12:48 AM
Comments
We welcome your feedback and encourage you to share your thoughts on this story. We ask that you be respectful of others and their points of view, refrain from personal attacks and stay on topic. To learn about our commenting policies and how we moderate, please read our Community Guidelines.