LAS VEGAS — After 628 career games, Reilly Smith finally sparked hockey fans to toss hats onto the ice. Smith got his first career hat trick, Marc-Andre Fleury made 20 saves, and the Vegas Golden Knights defeated the St.
May 9, 2021 1:46 AM By: Canadian Press 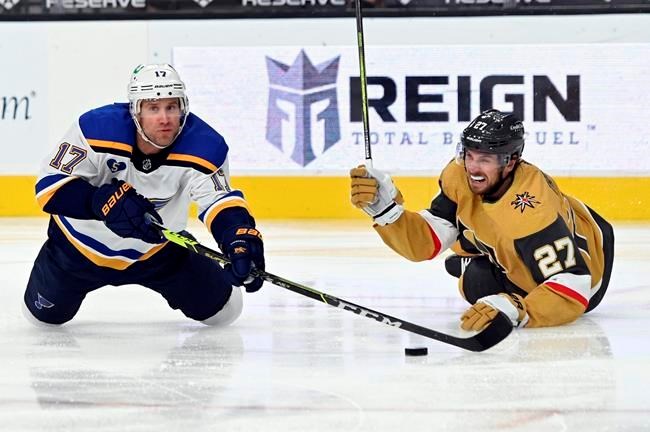 Smith joined Max Pacioretty as Golden Knights with hat tricks this season — both at home and both against the Blues.

“It took me over 600 games to get a hat trick,” Smith said. “It’s obviously a big moment for me and I’m happy about it, but there’s a lot of guys who helped me put the puck in the back of the net.”

Chandler Stephenson also scored for the Golden Knights, who moved into a tie with the Carolina Hurricanes for most points (80) in the NHL, as the two battle for the Presidents’ Trophy. The league’s overall No. 1 seed will have home-ice advantage throughout the playoffs.

Vegas extended its home winning streak to a season-high seven games. The Golden Knights meet the Colorado Avalanche on Monday in a matchup of the West Division’s top two teams, with the division title still up for grabs.

The Golden Knights, who have the tiebreaker over the Hurricanes for the best record, can clinch the West and the Presidents’ Trophy with a win over Colorado.

“This was an important game,” coach Peter DeBoer said. “We talked a month ago about making sure when we got Colorado to town at the end of the season that that game meant something. We’ve done a lot of work over the last five, six weeks to make it happen, and we did.

“Right now, that’s the biggest game of the year. It doesn’t get any bigger than Monday night.”

Since the Presidents’ Trophy was first awarded for the 1985-86 season, eight winners hoisted the Stanley Cup, while three others lost in the final, which means almost one-third of teams that finish with the best record during the regular season have played for the Stanley Cup.

The No. 1 overall seed has won five Stanley Cups since 1999 — more than any other seed. The last team to win both trophies in the same season, however, was the 2012-13 Chicago Blackhawks. And no Presidents’ Trophy winner has advanced to the Stanley Cup Final the past seven seasons.

Fleury, fresh off a victory that gave him sole possession of third place on the career wins list, has won eight straight games — none of which he has allowed more than two goals in.

For the second straight night against the Blues, Smith opened the scoring with a close-range shot at the doorstep to give Vegas a 1-0 lead. Shortly thereafter, former Blue Alex Pietrangelo picked off a pass and led a rush into the offensive zone, then delayed just long enough before feeding a gem to Stephenson for a one-timer past St. Louis’ rookie netminder. It was the first short-handed goal St. Louis allowed all season.

After managing just three shots in the first period, the Blues got off four in the second. Fortunately for them, their final attempt came when Parayko stripped Shea Theodore with a nifty stick lift behind the net and beat Fleury with a backhand past his blocker to breathe life into St. Louis just before the end of the period.

It wouldn’t matter, as Smith got his second goal of the game on a power play in the third period, when he chipped home his own rebound and notched his third with an empty netter with 48 seconds left in the game.

“We had some tired guys today in the lineup,” St. Louis coach Craig Berube said. “I didn’t think we were very good for two periods. We know how to generate against them. Tonight we weren’t engaged early enough. We couldn’t hit the net.”

The Golden Knights (7,657) and Phoenix Suns (8,063) welcomed the largest crowds for the NHL and NBA seasons, respectively, on Friday, the same number was in attendance Saturday in Vegas. The Golden Knights expect the exact same amount for Monday’s home finale against Colorado, and the number to increase for the opening round of the Stanley Cup playoffs.

Rookie Peyton Krebs, in just his fourth NHL career game after making his pro debut Monday, left the ice midway through the second period after taking Theodore’s wicked slap shot from the blue line off the left side of his face. Krebs didn’t return.