LOS ANGELES — Mikko Rantanen scored his 30th goal of the season, Cale Makar had a goal and an assist and the Colorado Avalanche beat the Los Angeles Kings 3-2 on Friday night.
May 8, 2021 1:57 AM By: Canadian Press 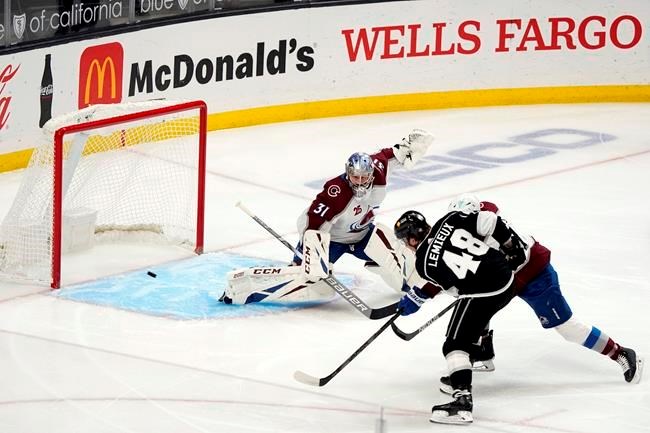 LOS ANGELES — Mikko Rantanen scored his 30th goal of the season, Cale Makar had a goal and an assist and the Colorado Avalanche beat the Los Angeles Kings 3-2 on Friday night.

Tyson Jost also scored, Philipp Grubauer made 15 saves and the Avalanche remained four points behind the Vegas Golden Knights for first in the West Division.

“I thought our competitiveness and our work ethic and our forechecking, getting back above pucks, all those things we’ve been talking about, we did a nice job,” Avalanche coach Jared Bednar said. “We weren’t perfect but it was a real good step in the right direction here with still four games to go so I liked the way we played tonight a lot.”

Brendan Lemieux and Gabriel Vilardi scored for Los Angeles. Cal Petersen made 34 saves as the Kings were eliminated from playoff contention.

“It was a real good game for us to play and a great game for us to evaluate where individuals are. We’ve got a long, long way to go to close the gap, but I think it’s better for us to play in these games right now than to have some token games against some teams that maybe aren’t in the playoffs,” Kings coach Todd McLellan said.

Despite falling behind early on Lemieux’s fourth goal 2:12 into the game, Colorado soon showed why it came in tied with Pittsburgh for the highest-scoring in hockey at 3.49 goals per game despite not having top Nathan MacKinnon available because of a lower-body injury.

“He’s an elite player and he’s had an elite season,” Bednar said. “Last season, we talked about it, he had some injuries and had to fight through some adversity. But this year he’s been healthy the whole time, he’s taken on a leadership role, and he’s going out every night to be a difference maker and that’s regardless of who he’s playing with or who’s in the lineup.”

Colorado went up 2-1 on Jost’s goal 2:56 into the second, beating Petersen five-hole for his fifth goal. Jost the first line with Rantanen and Gabriel Landeskog with MacKinnon out.

“He works so hard, you know,” Rantanen said of Jost. “That’s how he generates a lot from the forecheck, especially against these guys. How they play neutral zone, you have to dump a lot of pucks in and he’s really good at retrieving it so I think he showed it today and got a goal for it so credit to him.”

Makar made it 3-1 at 10:02, showing off his skating before burying a wrist shot from the right circle. It was his 10th multipoint game after notching an assist on Rantanen’s ninth power-play goal.

Vilardi got the Kings back to 3-2 with 2:34 remaining in the third but could not come up with the tying goal.

The Avalanche finished with five after Patrik Nemeth was hurt in the second period and did not return. Nemeth got his feet tangled up with Kings Jaret Anderson-Dolan and fell into the boards, but he was able to skate off under his own power.

Bednar said Nemeth did not sustain a concussion.

Bednar said he didn’t want to risk MacKinnon aggravating his injury so close to the start of the but there is a chance he could play Saturday.

Alex Newhook, who was drafted 16th overall in 2019, had the secondary assist on Makar’s goal for his first career point. Through two games, Newhook is already making an impression on his new teammates.

“He’s a fireball basically,” Makar said. “He’s so fast and it’s fun to watch when forwards can kind of chip it past the D and still beat them to the puck.”

Kings forward Dustin Brown did not play against the Avalanche and is being shut down for the remainder of the season because of a lingering upper-body injury. Brown missed two games March 14-17 because of the injury but his offensive production tailed off noticeably from that point, scoring four goals in his final 23 games after getting 13 goals in his first 26 games.

The Kings held a pregame ceremony to recognize Anze Kopitar getting his 1,000th career point against Arizona on Wednesday. Borut Pahor, the president of Slovenia, and Dallas Mavericks forward Luka Doncic were among those who recorded videos congratulating Kopitar.

The Avalanche and Kings will play again in Los Angeles on Saturday.