When the Washington Capitals took the ice needing to win in regulation to keep their division hopes alive, it came as a surprise when top center Nicklas Backstrom and No. 1 defenseman John Carlson were declared out 30 minutes before the puck dropped.
May 12, 2021 3:48 PM By: Canadian Press 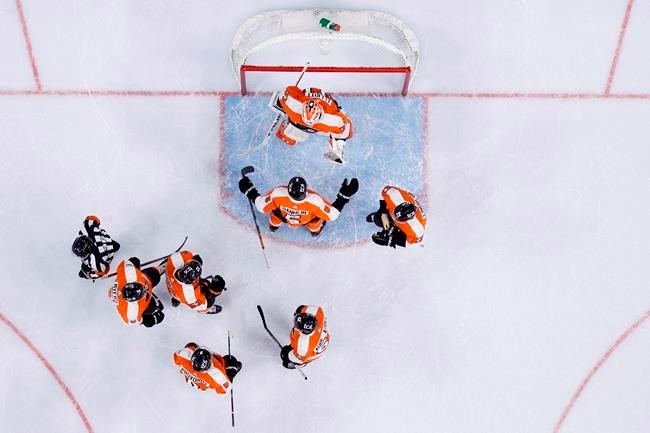 When the Washington Capitals took the ice needing to win in regulation to keep their division hopes alive, it came as a surprise when top center Nicklas Backstrom and No. 1 defenseman John Carlson were declared out 30 minutes before the puck dropped.

At least Washington revealed who was starting in goal. Vegas coach Peter DeBoer made it perfectly clear when the season began he would do no such thing.

"We’ll announce a starter at game time," DeBoer said. “Why give the other team any extra time to prepare than we have to for what they’re going to see in net?”

That philosophy won't change this weekend when the playoffs start and the money bet on hockey triples from the regular season. The NHL has embraced legalized sports betting and partnered with several sportsbooks, but the sport that prides itself on secrecy won't be giving up the goods on injuries or starting goaltenders any time soon.

It's a wrinkle for sportsbook operators and bettors, who realize that is just part of the deal when it comes to gambling on hockey.

“They 100% understand what they’re getting into,” said Keith Wachtel, the NHL's chief business officer and executive vice president of global partnerships. “It doesn’t matter how much information you might give in a sport — they would always want more. ... We’re not going to change our system that we have right now because of sports betting."

The Associated Press spoke with representatives from five of the six sportsbooks with NHL partnerships about the potential and pitfalls of hockey betting. The randomness of a bouncing puck deciding a game or series, the lack of injury disclosure and the subterfuge engrained in the sport all make it a challenging endeavor as the NHL seeks to make up ground on the NFL, NBA, Major League Baseball and others that attract more attention when it comes to wagering.

“It is frustrating — I’m frustrated by it sometimes,” said FanDuel trading director John Sheeran, who also bets and whose company provides odds to The Associated Press. “To some degree, it’s accepted. We know what happens. We know why it happens. It’s not like teams are trying to keep it secret for any other ill intent."

Good luck getting an early edge in hockey. Warmups that begin a half-hour before a game often reveal who's in and out — far less time than the list of inactive players in the NFL that have to be submitted 90 minutes before kickoff.

“The more information we can get, the earlier the better, so everyone knows exactly what’s going on,” PointsBet senior sports content analyst Andrew Mannino said. “You don’t want bettors to feel cheated if a star isn’t playing after they’ve after they backed his team, and we want as much information as possible, so anything we can get that we can count on on an even basis would be great for us.”

Discussions between league and sportsbook officials happen all the time, but Wachtel said there hasn't been pushback against the NHL over a lack of information. Hockey bettor Andy MacNeil likes it that way because he considers the sport a fun challenge to make well-informed decisions that amateurs need to dig to find out.

“That just screams that people want it to be easier,” said MacNeil, hockey analyst for VSiN, The Sports Betting Network. “But as a sports bettor, I’m not interested in helping anybody.”

BetMGM sports trader Seamus Magee said injury disclosure is an issue for sportsbooks, but the bigger challenge for bookmakers is finding out which goalies will start. More than half the playoff teams this year could use multiple goaltenders, so the guessing games will continue.

Surprising lineup decisions do not have as big an effect as other sports given the team-centric nature of hockey.

“The drop off and performance from a hockey team without their star player just isn’t as big a drop as it is for the Lakers without LeBron or for the Buccaneers without Brady,” Sheeran said.

And less money is bet on the NHL than the other major North American pro sports leagues. Nick Bogdanovich, director of trading for William Hill U.S., said, “NHL betting has always been way, way, way, way, down” below the NFL, NBA, MLB and other sports but points to the Vegas Golden Knights as a reason for optimism.

“I can’t even tell you how many people I know that didn’t even know what the puck was and now they live and die for the Golden Knights games,” Bogdanovich said. “People, once they see the game and are into the game, they like the game.”

Ted Leonsis has been betting on that. Not a bettor himself, the owner of the Capitals and NBA's Wizards joked that he didn't even know what an upper-body injury meant “and I own the team." But he will open the first brick-and-mortar sportsbook at an NHL arena later this year.

“Our generation might have looked at gambling (as) just the term gambling is negative,” Leonsis said. “Sports gaming to a young person has no negative connotations. ... I’ve been amazed at how quickly the stigma of gaming and gambling is draining away.”

Hockey is a global sport, but even in the 18 states and the District of Columbia that have legalized sports betting, it's still a niche option for bettors. Canada appears close to legalizing single-game sports betting, which itself could be a boon for hockey betting.

The next major step in technology is puck and player tracking, which could provide bettors with thousands more data points and gambling opportunities and begin to approach what other sports have provided for years.

"It can’t come soon enough," Mannino said. “That kind of statistical data being available for hockey is is certainly going to be a game-changer.”