Panthers starting over with new coach and new top line

SUNRISE, Fla. — Florida general manager Dale Tallon has selective amnesia. To him, how things went for the Panthers last season is no longer worth talking about or even remembering. It's another restart for Florida.
Sep 27, 2017 5:45 PM By: Canadian Press 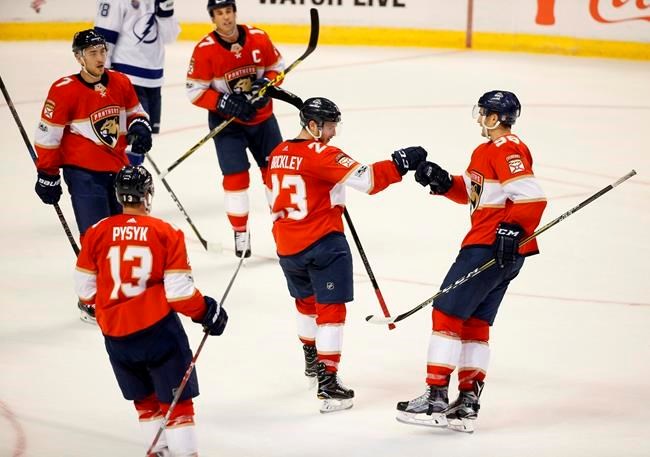 SUNRISE, Fla. — Florida general manager Dale Tallon has selective amnesia. To him, how things went for the Panthers last season is no longer worth talking about or even remembering.

It's another restart for Florida.

With a new coach in Bob Boughner and a new top line after Jaromir Jagr wasn't brought back, the Panthers are in their annual place of thinking this will be the season that brings change. The optimism isn't unfounded — team officials are certain that Boughner will be a great hire, and it didn't take long in camp for Florida to see that the roster is improved over what it was a year ago.

That all being said, the Panthers have a lot of ground to make up: They missed the playoffs by 14 points last season.

"We learned from it," said Tallon, who spoke of last year's debacle with the team on the day camp opened and insists he won't talk of it again. "The past is the past ... and our players should think that same way."

The big addition for the Panthers, besides Boughner, should be Evgeni Dadonov — who returned to Florida after being out of the NHL for more than five years.

The right wing will join Aleksander Barkov and Jonathan Huberdeau on Florida's No. 1 line. He's been in Russia's KHL for the past five seasons in Russia's KHL, with 101 goals and 123 assists.

"I think, and I said it early on, once they get familiar with each other, I think it's going to be a scary line," Boughner said. "You could see that when they get out there and they've got puck control and they've got full speed. I think they're one of the best lines in the league, myself."

Here's some of what to know going into the Panthers' season:

FIND GOALS: The Panthers had six players score more than 10 goals last season. Only two of those guys are back — Jonathan Marchessault, Jaromir Jagr, Reilly Smith and Jussi Jokinen — no longer are with the Panthers. And their departures means most of Florida's power-play production from last season is also gone.

STREAKING: Florida had seven losing streaks of three or more games last season, five of those lasting four games or more. There just were too many stretches where things didn't go right in bunches, like a six-game stretch with only eight goals scored and another six-game stretch where Florida gave up 28 goals.

SCHEDULE WATCH: There's two particularly daunting schedule stretches of the season for the Panthers. First comes Dec. 11 through Jan. 9, a 14-game run that starts with a five-game road trip, then a four-game homestand followed by five more road games. And seven of Florida's last eight games in March are on the road, all against Eastern Conference opponents.

STILL WAITING: Since going to the Stanley Cup final in 1996, the Panthers still haven't won a single playoff series — losing quickly in each of their last four playoff appearances. Florida has won six playoff games since that run; by comparison, over that time Detroit has won 135 and Pittsburgh has won 115.