NEW YORK — T.J. Oshie had a hat trick, Vitek Vanecek made 19 saves and the Washington Capitals beat the depleted New York Rangers 4-2 in a fight-filled game Wednesday night.
May 6, 2021 12:48 AM By: Canadian Press 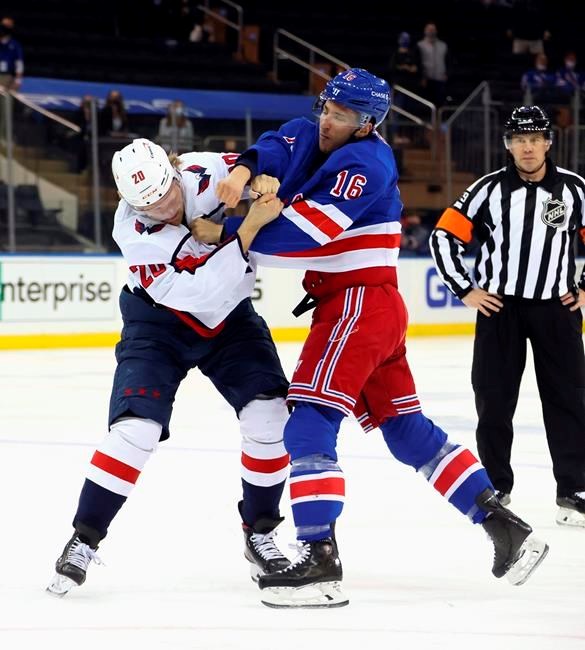 Oshie beat Alexandar Georgiev 12 seconds into the middle period with a shot from the right circle with Rangers forward Pavel Buchnevich in the penalty box.

Oshie scored again at 8:26 of the second — again with Buchnevich penalized for a high-sticking major — his 20th goal of the season.

Nic Dowd also scored for Washington at 14:48 of the second with assists to John Carlson and Dmitri Orlov, his second of the game.

Oshie, whose father died this week, completed his hat trick with an empty net goal at 18:20 of the third.

Rangers rookie Alexis Lafreniere ruined Vanecek’s shuout bid at 1:15 of the third period with his 11th goal of the season. Fellow rookie forward Morgan Barron scored his first NHL goal at 18:44 to complete the scoring.

The Capitals moved into a first-place tie with idle Pittsburgh in the East Division. Washington has three games left while the Penguins have two.

The dismal loss — the Rangers’ fourth straight — came in their home finale and on the same day the organization stunningly fired President John Davidson and General Manager Jeff Gorton. The team said former Ranger Chris Drury would take over both jobs.

The contest also followed Monday’s 6-3 loss to the Capitals in which Washington forward Tom Wilson pummeled Rangers top scorer Artemi Panarin after Wilson had punched Buchnevich during a scrum near the Capitals net. The loss eliminated the Rangers from the playoffs for the fourth straight season.

Wilson was assessed 14 minutes in penalties but not tossed from the game. On Tuesday, the NHL fined the Capitals agitator $5,000 leading the Rangers to issue a scathing statement criticizing the league and director of player safety George Parros.

Defending champion Tampa Bay has won six of the seven meetings this season between the 2020 Stanley Cup finalists. The teams will meet again Friday night in Tampa.

The Stars remained alive for the fourth and final spot in the Central Division after Nashville’s loss in Columbus. Dallas is four points back with three games remaining.

Andrei Vasileskiy finished with 20 saves for his 31st victory of the season.

Brayden Point and Alex Killorn each had a goal and an assist for Tampa Bay. Ross Colton, Mikhail Sergachev and Tyler Johnson also scored for Tampa Bay. The Lightning are 6-0-1 in their past seven to move into a tie for second place in the Central Division with Florida. The Lightning have played one fewer game.

Andrej Sekera and Tyler Seguin scored for Dallas. The Stars are 0-3-2 in their past five games.

Arizona’s Jakob Chychrun had his 18th goal, which leads all NHL , and Oliver Ekman-Larsson also scored. Once in the West Division’s fourth spot, the Coyotes dropped out of the race by losing nine of 12.

Alex Tuch, the Wild’s first-round draft pick in 2014, set up Pietrangelo with a pass across the slot that helped the West Division-leading Golden Knights loosen the race a little and win for the first time in four games at Minnesota this season.

Marc-Andre Fleury made 26 saves and took over sole possession of the No. 3 spot on the NHL’s career wins list with No. 490.

Chandler Stephenson had a second-period goal and Reilly Smith had the tying score with 4:16 remaining in regulation for Vegas, after Kirill Kaprizov scored two goals in a 2:10 span for the Wild.

Oliver Bjorkstrand had two goals, including an empty-netter with less than a second remaining, and Jack Roslovic also scored for the Blue Jackets.

Elvis Merzlikins made 30 saves for the victory.

Haydn Fleury and Max Jones scored in regulation for the Ducks. Anthony Stolarz made 25 saves and stopped all three attempts in the shootout.

Terry beat Jordan Binnington with a forehand-backhand combination in the second round of the shootout. Stolarz stopped Ryan O’Reilly in the next round to secure the win.

Mike Hoffman and Kyle Clifford scored for the Blues.

SAN JOSE, Calif. (AP) — Tomas Hertl had two goals and an assist in his 500th career NHL game and Erik Karlsson scored a go-ahead goal in the third period to lead San Jose past Colorado.

Evander Kane added three assists and Josef Korenar made 30 saves as San Jose scored three goals after falling behind 2-0. It was an inspired effort two nights after the Sharks lost to Colorado and were eliminated from the playoff chase.

Karlsson’s power-play goal with 10:42 left in the third broke a 2-2 tie and the Sharks held on for just their second win in eight meetings with the Avalanche this season.

Andre Burakovsky and Tyson Jost scored for the Avalanche.

Connor Hellebuyck made 32 saves for his third shutout of the season, and Andrew Copp added two assists for the Jets.

Wheeler’s second goal of the night was the 800th point of his NHL career. Mark Scheifele, meanwhile, had the primary assist on the play for his 500th point.

Paul Maurice picked up his 300th win as Jets coach as Winnipeg wrapped up its season series against Calgary with a record of 6-2-1.

Anton Forsberg made 30 saves for Ottawa after signing a one-year, $900,000 extension Wednesday.

Brady Tkachuk, Nick Paul, Connor Brown and Alex Formenton also scored for the Senators. They improved to 8-2-1 over their past 11 games.

Joel Edmundson scored for the Canadiens.