NEWARK, N.J. — Dmitry Orlov scored on a length-of-the-ice rush with 21 seconds left in overtime and the Washington Capitals beat New Jersey 2-1 Friday night for their seventh straight win over the Devils this season.
Apr 3, 2021 1:18 AM By: Canadian Press 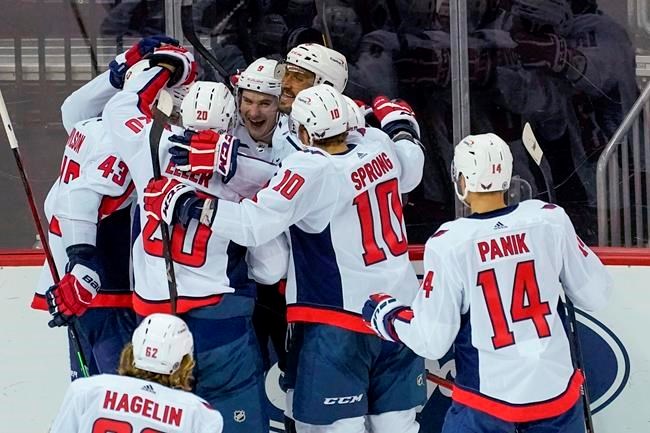 NEWARK, N.J. — Dmitry Orlov scored on a length-of-the-ice rush with 21 seconds left in overtime and the Washington Capitals beat New Jersey 2-1 Friday night for their seventh straight win over the Devils this season.

Vitek Vanecek made three outstanding saves in the extra period, including a close-in redirection attempt by Travis Zajac seconds before Orlov skated up ice and ripped a shot over Mackenzie Blackwood.

John Carlson scored for the third time in two days as the Capitals bounced back from an embarrassing 8-4 loss to the New York Islanders on Thursday night. Vanecek finished with 22 saves in helping Washington move back into first place in the East Division, two points ahead of the Islanders and Penguins with 19 games left in the regular season.

Michael McLeod scored for New Jersey and Blackwood made 38 saves.

Jonas Johansson had 25 saves for his first win for the Avalache in his second start since coming over from Buffalo in a trade on March 20. Gabriel Landeskog assisted on both of MacKinnon’s goals for the Avalanche, who have gone 11-0-2 in their last 13 games to take over first place in the West Division.

The Blues got goals from Mike Hoffman and David Perron and 36 saves from Jordan Binnington, but lost their fifth straight game (0-4-1).

WINNIPEG, Manitoba (AP) — Jason Spezza scored the only goal of the shootout to lift Toronto past Winnipeg.

The veteran forward corralled a rolling puck before deking Connor Hellebuyck and tucking it in the small gap between the goaltender’s outstretched pad and the post.

Kyle Connor, Pierre-Luc Dubois and Mark Scheifele were unable to beat Toronto goaltender Jack Campbell in the tiebreaker as he improved to 8-0-0 on the season.

Andrew Copp had the lone goal for the Jets. Hellebuyck had 37 saves.

Johan Larsson and Nick Schmaltz also scored for the Coyotes, who have won four of their last five games to move back into the final playoff spot in the West Division. Adin Hill made 27 saves.

LOS ANGELES (AP) — Tomas Hertl had a goal and an assist, Martin Jones made 30 saves for his first shutout of the season and San Jose beat Los Angeles.

Timo Meier and Rudolfs Balcers also scored for the Sharks, who have won three straight and five of seven. Jones got his 25th career shutout and first since Feb. 29, 2020 against Pittsburgh.

Cal Petersen made 33 saves for the Kings, who have lost four of five.

Michael Stone and Matthew Tkachuk scored for Calgary, and Jacob Markstrom had 22 saves while losing his fifth straight start.

Edmonton beat Calgary for the fifth time in seven meetings this season with three more remaining.