New York Rangers Hall of Famer Jean Ratelle will finally get his No. 19 raised to the rafters at Madison Square Garden, the same season Eric Lindros will have his No. 88 retired by the Philadelphia Flyers.
Aug 28, 2017 3:59 PM By: Canadian Press 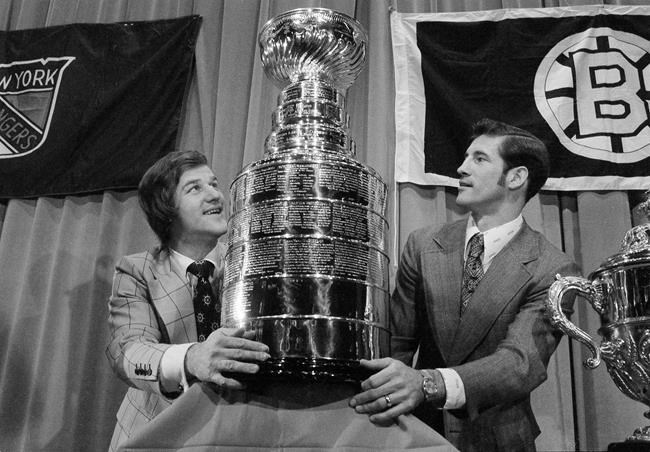 New York Rangers Hall of Famer Jean Ratelle will finally get his No. 19 raised to the rafters at Madison Square Garden, the same season Eric Lindros will have his No. 88 retired by the Philadelphia Flyers.

Lindros will take another step toward rebuilding his relationship with the Flyers when he's before their Jan. 18 game against the Toronto Maple Leafs. Ratelle will have his night Feb. 25 before the Rangers face the Detroit Red Wings.

Ratelle, who played parts of 16 of his 21 NHL seasons with the Rangers, entered the Hockey Hall of Fame in 1985 and is second on their franchise goals list with 336 and third in assists with 481 and points with 817.

"Jean Ratelle is truly one of the greatest players to have ever played for the New York Rangers," said team president Glen Sather, who played with Ratelle. "Few players have demonstrated the class, dignity, and gracefulness that Jean possessed throughout his career, both on and off the ice."

Lindros is the sixth Flyers player to have his number retired after Bernie Parent, Mark Howe, Barry Ashbee, Bill Barber and Bobby Clarke, but he's the most unlikely of that group. "The Big E" won the Hart Trophy as league MVP in 1995 and was one of the most dominant players of his era, but injuries cut his career short and he and his family often feuded with Clarke and Philadelphia management.

Playing in the Winter Classic alumni game a few years ago began to repair that relationship. He said things have evolved since, leading to team president Paul Holmgren calling him to let him know his No. 88 was being retired.

After looking up at the other numbers in previous trips to the arena, Lindros said he was "overwhelmed" by the .

"I've glanced up there every once in a while and had a look at that," Lindros said on a conference call Monday. "There's been a lot of terrific, really great players who had a chance to play in Philadelphia. To be up top and hang high up there is real special."

Lindros had 290 goals and 369 assists and 659 points in 486 games with the Flyers. He finished his career by playing three seasons with the Rangers and one each with Dallas and Toronto.

Though he had no input on the decision, Lindros is thrilled as an Ontario native and Toronto resident that the game comes against the Maple Leafs, whom he watched every Saturday night growing up.

"A bunch of my buddies that are die-hard Maple Leafs fans are texting away and getting organized for flights down to Philly. "It's going to be a fun night, and it kind of brings both sides together."