TORONTO — John Tavares — Toronto's calm, cool captain — smashed his stick against the post late in another loss where a decent effort was undone by costly, preventable errors. It's been a recurring theme for the Maple Leafs in 2019-20.
0
Nov 15, 2019 11:43 PM By: Canadian Press 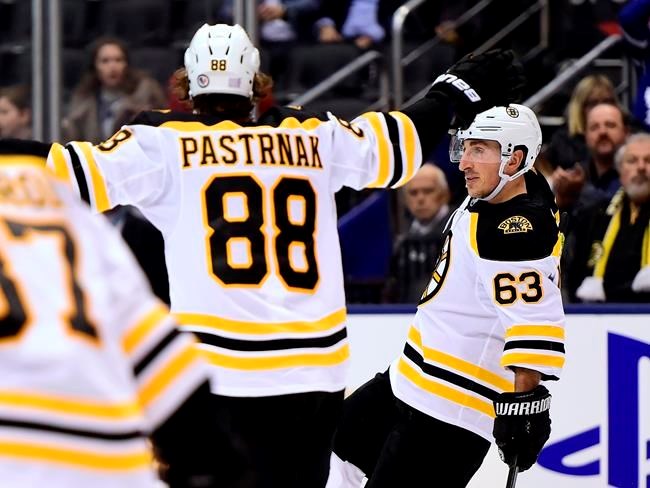 TORONTO — John Tavares — Toronto's calm, cool captain — smashed his stick against the post late in another loss where a decent effort was undone by costly, preventable errors.

It's been a recurring theme for the Maple Leafs in 2019-20. If they don't get their house in order soon, a fourth straight trip to the playoffs could be in jeopardy.

"We're just on the wrong side of it," Tavares said. "It was a pretty good hockey game other than a couple of mistakes that obviously hurt us."

Charlie Coyle, with a goal and an assist, and Zdeno Chara provided the rest of the offence for Boston (12-3-4). Tuukka Rask made 29 stops for the Bruins, who snapped a 0-2-2 slide.

"It's a game that we get up for," said Marchand, whose team has eliminated the Leafs in the first round of the playoffs the last two springs. "A lot of history."

Auston Matthews and Kasperi Kapanen replied for Toronto (9-8-4), which got 30 saves from Frederik Andersen.

A franchise that entered training camp with Stanley Cup aspirations, the Leafs have just six regulation victories in 2019-20, and only two in their last 14 outings.

"There's a huge sense of urgency," Tavares added. "We're not where we want to be."

Boston snapped a 1-1 tie 11 seconds into the third when Marchand scored his 12th goal of the season, depositing his own rebound after being given way too much space before stepping around Leafs defenceman Morgan Rielly.

Toronto replied at 3:54 when Kapanen took a feed from Tavares and scored his sixth, but Marchand silenced the crowd just 1:14 later, slicing between two Leafs in the slot and again following up his initial shot.

"He really took (the game) over," Rask said. "He wanted to be the difference maker."

Neither side gave up much the rest of the way until Chara iced it into an empty net with 1:33 left in regulation, prompting a frustrated Tavares to splinter his stick against the iron.

"It's not something I, personally, really want to do," he said. "Some emotion came out ... just kind of happened."

Toronto, which beat the Bruins 4-3 in overtime at Scotiabank Arena on Oct. 22, visits the Pittsburgh Penguins to open a six-game road trip Saturday, while Boston is home to the Washington Capitals.

"The capability in our room is better than what we've shown," Matthews said. "This is an important road trip for us. This is our first road trip of the year. Hopefully we can string along a couple wins together and just grow from there."

"We've got a lot of hockey left to play," Tavares added. "It's not going to change overnight. We've got to continue to put the work in and fix our mistakes and continue to find ways to be better — and stay with it — because it's going to be hard."

The Bruins were minus defenceman Torey Krug, as well forwards Jake DeBrusk and Brett Ritchie, who are all nursing upper-body ailments.

Boston led 1-0 after 20 minutes before the Leafs equalized midway through the second. Jake Muzzin's point shot looked to be sailing wide, but Matthews lunged his stick out in the slot for a redirection that fooled Rask for his 14th at 9:20. The goal stood after a brief video review.

The Bruins had a chance to retake the lead moments later when Sean Kuraly fired high over Andersen's net on a breakaway.

Boston got a power play later in the period, with David Pastrnak just missing on a one-timer and Patrice Bergeron hitting the post on the carom off the end boards.

Toronto nearly scored a beauty to grab its first lead when Kapanen put the puck through Bergeron's skates at the blue line and then slid a no-look, behind-the-back pass to Tavares, but he couldn't find the target.

Boston grabbed a 1-0 advantage at 13:48 of the first when Coyle scored his third after another Toronto brain cramp in the defensive zone. Leafs blue-liner Travis Dermott was battling the Bruins centre in front, but left his check to challenge Matt Grzelcyk, who promptly fed Coyle from behind Andersen's net.

Both goalies were sharp early, with Andersen stopping Marchand and Pastrnak, while Rask stymied Andreas Johnsson on a partial breakaway before Spezza shanked a loose puck with what looked like a sure goal on his stick. Matthews also hit the post from in tight down low.

"I don't think anybody's getting frustrated," Kapanen said. "We want to get things rolling and have an identity.

"We've got to stay positive."

Notes: Toronto backup goalie Kasimir Kaskisuo will make his first NHL start Saturday. ... The Leafs are 0-4-1 in the second half of a back-to-back in 2019-20. ... The Hockey Hall of Fame's class of 2019 — Hayley Wickenheiser, Guy Carbonneau, Sergei Zubov, Vaclav Nedomansky, Jim Rutherford and Jerry York — was honoured before puck drop.

This report by The Canadian Press was first published Nov. 15, 2019.