Marchand scores in OT, Bruins beat Capitals to even series

WASHINGTON (AP) — All Brad Marchand had to show for the first 60 minutes of Monday night's game was two penalties for post-whistle antics. He needed less than a minute to make up for it.
May 17, 2021 11:42 PM By: Canadian Press 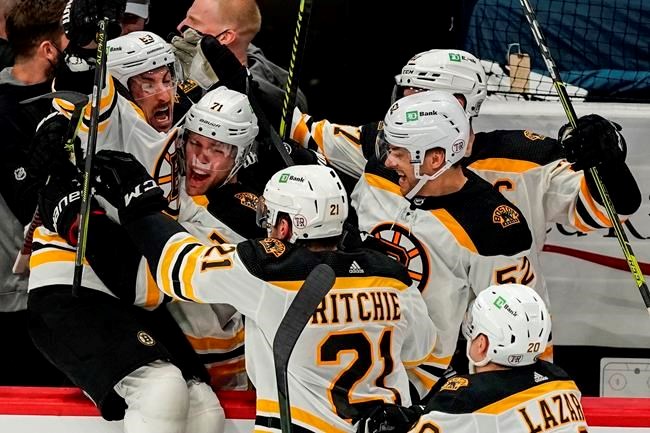 WASHINGTON (AP) — All Brad Marchand had to show for the first 60 minutes of Monday night's game was two penalties for post-whistle antics.

He needed less than a minute to make up for it.

After a hard-fought victory in which Marchand played a significant role, the Bruins will almost certainly take the good and the bad of their leading scorer who likes to get under the skin of his opponents.

“There’s way, way more good than bad, and I think he wanted to drag us into the fight — and we needed it,” coach Bruce Cassidy said. “I think he’s matured enough now to not take himself out of the game. Maybe that would have been a game in the past he would’ve let it get to him and he wouldn’t have been an effective player, but he found his game and certainly a big part of the win with the overtime winner.”

Marchand ripping a one-timer past Craig Anderson to send the series back to Boston tied will be remembered far more than him jabbing Capitals defenseman Brenden Dillon below the belt at the end of a scrum in the first period or slashing Anthony Mantha when they got into it in the second. But those won't be forgotten, and could have derailed him.

“It’s about just being able to kind of get back into the game,” said Marchand, who ranked third in the NHL with 69 points during the regular season. “We’re obviously on the biggest stage right now and got to stay out of the box in these games, so I’ve got to do a little bit better job there.”

The Bruins are at their best when Marchand is toeing that line and also producing. So it was captain Patrice Bergeron's job to grab him, reel him in and get Marchand re-focused on the task at hand. It worked, and Boston doesn't want Marchand any other way.

“That’s who he is," said Bergeron, who scored in the first along with Jake DeBrusk. "He competes at all times. His will and his want to be the difference is there every time.”

Game 3 is Wednesday night in Boston.

“I think we’ll be there with a response,” Capitals coach Peter Laviolette said. "Our guys have always responded in game and through the course of the season, so we’ll be ready to play.”

The Bruins were less than three minutes away from pure desperation mode in the series.

Two penalties early in the third period took Boston out of rhythm as Garnet Hathaway scored his second of the game to give Washington the lead with 12:56 left. Anderson — who made 38 consecutive saves after allowing two goals on the first five Bruins shots — was a rock until Taylor Hall whacked a loose puck past him with 2:49 left in regulation.

“It was a greasy goal, for sure," said Hall, who joined the Bruins at the trade deadline. "It wasn’t a perfect game for me. I still have another level to get to personally, but as a team we came together and won a game and that’s all you can ask for.”

Boston got 36 saves from Tuukka Rask, who was beaten twice by deflections. Hathaway scored twice and T.J. Oshie redirected a shot in for Washington, which played without goaltenders Vitek Vanecek and Ilya Samsonov and center Evgeny Kuznetsov, and lost center Lars Eller to a lower-body injury in the middle of Game 2.

“(Rask) certainly played well, gave us a chance to win,” Cassidy said. “The game was always close. You don’t want it to get away from you. I thought both goalies were good. I thought their guy was excellent, too, but we were one better.”

While Vanecek is considered day-to-day with a lower-body injury, Kuznetsov and Samsonov remained out after clearing league COVID protocol Sunday. Each missed the final five games of the regular season, and there’s no definitive timeline for when they’ll be available to play.

The Bruins played without defenseman Jeremy Lauzon, who was replaced on the blue line by Connor Clifton, a right shot playing his off side.

Capitals defenseman Zdeno Chara plays as a visitor in the playoffs at TD Garden in Boston for the first time after 73 games there as Bruins captain. Puck drop on Game 3 is 6:30 Wednesday night.