BOSTON — Brad Marchand had two of his three goals and set up another in Boston’s five-goal second period, and the Boston Bruins rebounded from a lacklustre effort with a 7-5 victory over the Pittsburgh Penguins on Saturday afternoon.
Apr 3, 2021 6:40 PM By: Canadian Press 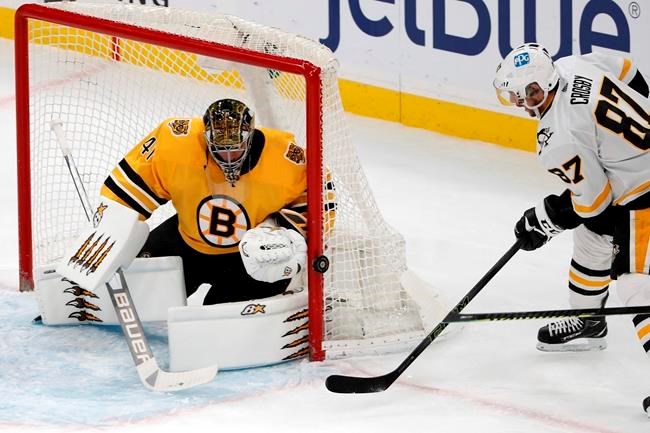 BOSTON — Brad Marchand had two of his three goals and set up another in Boston’s five-goal second period, and the Boston Bruins rebounded from a effort with a 7-5 victory over the Pittsburgh Penguins on Saturday afternoon.

Patrice Bergeron moved into a tie for fourth on the club’s all-time scoring list. David Pastrnak scored twice, David Krejci and Bergeron each had a goal for Boston. Bergeron has 899 career points to equal Rick Middleton (898).

Playing for the first time after coach Bruce Cassidy called out some of his top veterans two days ago, saying he was “disappointed” in their play, the Bruins' core group struck in big numbers in the second period.

“High-end plays by high-end players,” Cassidy said of his top players after Saturday's win. “It was nice. Haven't had those kind of nights in our building much.”

Sidney Crosby, Jake Guentzel, Jared McCann, Mark Jankowski and Cody Ceci each scored for the Penguins, who had ended a 10-game winless stretch in Boston (0-8-2) with a 4-1 victory over the Bruins on Thursday. It was their first win in TD Garden since Nov. 24, 2014.

The loss ended Pittsburgh’s five-game winning streak and was just its fourth in the last 15 games (11-3-1). Casey DeSmith had 21 saves for Pittsburgh. He had allowed just two goals or less in his last eight games for a 1.05 goals-against-average.

Crosby’s short-handed goal made it 6-5 with 1:15 left, but Marchand’s empty-netter sealed it 14 seconds later. It was the first hat trick by a Bruins' player since fans were able to return to the building in limited, 12% capacity, due to the pandemic.

After Marchand's goal, an add went up on the Jumbotron offering fans a 25% discount on new hats.

“It's nice to be able to see hats on the ice at the Garden,” Pastrnak said.

“You can't give up that many chances in the slot,” Ceci said. “It definitely stings. We were pretty excited to get the win the last game. We knew they were going to push back, and they definitely did.”

Marchand tied it when he beat DeSmith with a wrister from the left circle after Matt Grzelcyk circled the net and sent a pass across from the right corner.

Marchand then set up Krejci’s score with a pass from the high slot that the redirected into the net from the edge of the crease.

In the closing seconds of the period, Marchand collected a pass from Charlie McAvoy in the slot and fired a shot that caromed into the net off the left post.

The Bruins scored when Bergeron slipped a wrist shot past DeSmith and took the lead 2-1 on Pastrnak’s goal 34 seconds later. It ended a five-game goalless stretch for Pastrnak. Last season, the winger scored 48 goals, tying Washington’s Alex Ovechkin for the NHL’s most.

Crosby now has 62 points (16 goals, 46 assists) against the Bruins, the most by any active player.

Bruins Brandon Carlo, who suffered an undisclosed upper-body injury Thursday, will be evaluated on a “week-to-week basis.” Carlo sustained a concussion on March 5 on a head hit by the Capitals’ Tom Wilson that earned the forward a seven-game suspension from the league.

“It’s been a trying year for him injury-wise,” Cassidy said before the game.

Boston Jeremy Lauzon was a late scratch. Jarred Tinordi took his spot in the lineup. Lauzon had a rough game Thursday, getting beaten for a goal and turning the puck over a few times in the defensive zone.

Bruins Sean Kuraly was back after missing six games due to COVID-19 protocol.

Penguins: At the New York Rangers on Tuesday, the first of consecutive meetings between the clubs in Madison Square Garden.

Bruins: Host the Flyers on Monday in the first of home-and-home matchups. It’ll be Boston’s finale of a franchise-record tying seven-game homestand.