OTTAWA — The Ottawa Senators called their 4-0 loss to the Montreal Canadiens on Saturday night a good lesson.
Sep 21, 2019 11:25 PM By: Canadian Press 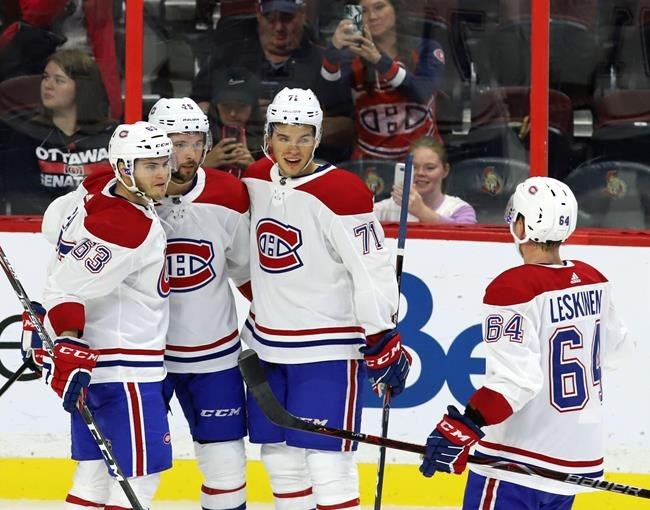 OTTAWA — The Ottawa Senators called their 4-0 loss to the Montreal Canadiens on Saturday night a good lesson.

The Senators were outplayed from start to finish in nearly every area of the game, but if it had to happen the pre-season is as good a time as any.

"They had a bunch of hungry guys trying to make the NHL and we didn't work as hard as in camp and some previous games so that was disappointing," said Senators head coach D.J. Smith. "Third period we worked and that's all I've asked is if you've worked every single day and that was the first time we didn't and it was obvious."

The Canadiens improved to a perfect 4-0-0 in this year's pre-season with the win.

"He didn't have many pucks, but we always say that about a goaltender," said Canadiens coach Claude Julien. "When you don't get a ton of shots you need to keep your focus. What I liked about him is he made some big saves at times. They were really crashing the net…but he held his ground and I thought he made some big saves and he was pretty solid so I'm pretty happy with what I saw of him (Saturday)."

Like most coaches, Julien doesn't put a ton of stock in pre-season records, but at the same time says it is important.

"It gives you confidence if you win (in the pre-season)," said Julien. "We've won with split squads so that's been good as well. It's never a bad thing to win."

Craig Anderson stopped 27-of-29 shots through two periods of play and was the only reason the game was close as the Senators (2-1-0) were being heavily outplayed. Joey Daccord gave up two goals on five shots in the third period.

The Senators made no excuses and know they need to be better as the regular season approaches.

"We're playing at home and we're trying to be too nice with everybody on the team," said Ottawa's Thomas Chabot, who played his first pre-season game. "This is a good reminder that we still have a lot of work ahead of us before the season starts."

Special teams were a big factor as the Canadiens went 3 for 3 on the power play, while the Senators were 0 for 5 with the man advantage.

Part of Ottawa's problem was its inability to win draws when it counted.

"If you start with the puck it's significantly different," said Smith. "We were better later in the game, but we're just getting the kinks out, Chabot's first game and people just learning each other so I'm not going to worry about that."

Leading 2-0, the Canadiens extended their lead early in the third period, scoring twice in a span of 39 seconds.

Tatar made it 3-0 by beating Daccord glove side and seconds later Danault fired a shot from just inside the blue-line to make it 4-0.

Montreal opened the scoring on the power play at the six-minute mark of the second.

Nikita Zaitsev had blocked a shot, but the puck went right to Petry who beat Anderson short side.

Minutes later, Anderson made an impressive save on Nick Suzuki as the Canadiens were all over the Senators.

Montreal made it 2-0 late in the period as Anderson put the puck behind the net, but it was Montreal's Riley Barber who won the footrace and passed it out front to Evans.

The Senators were outshot 18-6 in the second period and five of those shots came in the final two minutes of the period.

Both teams had some chances in the first period, but the game remained scoreless after 20 minutes.

The Senators are expected to make some cuts to their roster on Sunday as they prepare for two games in Vancouver this week.

This report by The Canadian Press was first published Sept. 21, 2019.