SAN JOSE, Calif. — Phil Kessel scored the go-ahead goal for his 900th career point and Victor Soderstrom and Jan Jenik each scored their first NHL goals as the Arizona Coyotes beat the San Jose Sharks 5-2 on Friday night.
May 8, 2021 2:03 AM By: Canadian Press 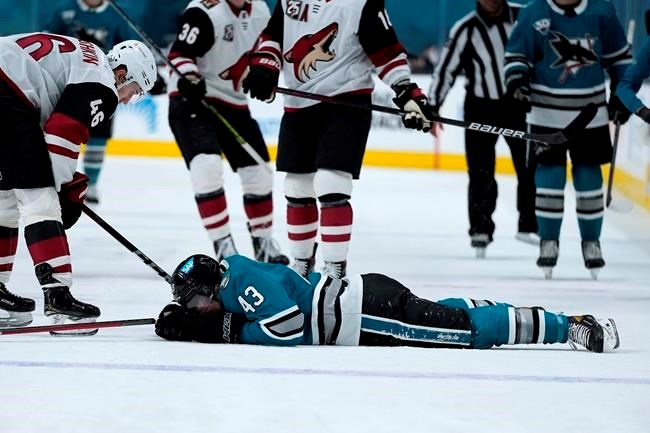 Conor Garland added a goal and two assists for Arizona, which also benefited from an overturned San Jose goal that would have tied it in the third.

Kessel scored a breakaway goal to snap a 2-2 at 4:53 of the third, just minutes after being denied by Sharks goalie Josef Korenar on a similar play. It was Kessel’s ninth goal against the Sharks this season. He’s the first opponent to ever score that many against San Jose.

“It might be my first breakaway goal of the year,” Kessel said. “I’m happy to score on a breakaway for once. I don’t know, I stink at them. Gotta figure it out during the summer I guess.”

Erik Karlsson appeared to net a tying goal with 12:14 left, but Arizona issued a coach’s challenge and the goal was denied when San Jose was found to be offside.

Michael Bunting made it 4-2 with a goal that was set up nicely by Garland and Jenik added an empty-netter just before the final horn to make his NHL debut a memorable one.

Darcy Kuemper had 26 saves for Arizona.

San Jose Mario Ferraro thought his team gave the Coyotes too many chances in open ice.

“I thought they got behind us a little bit,” Ferraro said. “One of those goals there, I was up on a play, and Kessel saw the breakaway. He had a couple breakaway chances. We should have been more aware of that.”

Karlsson’s first-period goal gave the Sharks the lead. They made it 2-0 on Timo Meier’s 11th goal of the season early in the second.

But Arizona answered right back with the first career NHL goal for Soderstrom, who patiently worked the puck down the right side and rattled a shot into the upper left corner of the net to make it 2-1.

The Sharks were close to killing off a 5-on-3 power play, but Garland scored on a one-timer for his first goal since March 31 to make it 2-2.

SAP Center went quiet in the first period after Sharks rookie forward John Leonard crashed head-first into the boards near Arizona’s bench and lay motionless on the ice for a couple minutes.

Eventually Leonard got to his feet with assistance from the training staff and was helped off the ice.

Garland missed two weeks with a lower-body injury, but in three games back with the Coyotes he has six points (one goal, five assists).

“It’s nice to see him get that goal and play that style,” Arizona coach Rick Tocchet said. “Him coming back (from injury), I wish we had him a week before when we were struggling to score some goals.”

Sharks captain Logan Couture was scratched Friday with a lower-body injury that could sideline him for the team’s final two games.

San Jose coach Bob Boughner said during his morning media session that Couture has been bothered by the injury for a while. With the Sharks out of playoff contention, the team will play it safe. San Jose hosts Arizona again Saturday and finishes the season at home Wednesday against Vegas.

The teams face each other in a Saturday rematch in San Jose.