ST. PAUL, Minn. — Kirill Kaprizov scored 17 seconds into overtime to send the Minnesota Wild to a 4-3 win against the Anaheim Ducks on Friday night.
May 7, 2021 11:35 PM By: Canadian Press 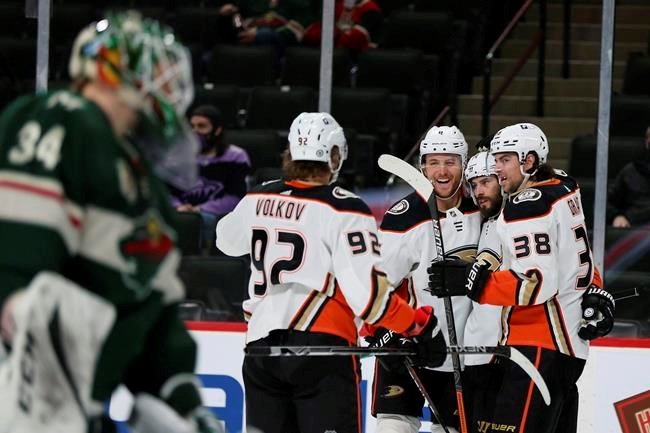 ST. PAUL, Minn. — Kirill Kaprizov scored 17 seconds into overtime to send the Minnesota Wild to a 4-3 win against the Anaheim Ducks on Friday night.

Kaprizov, the rookie sensation with 27 goals this season, snapped a quick shot that was stopped by Anaheim goalie John Gibson, but drove the net and found the puck on a rebound and easily scored with Gibson unable to recover.

“He’s a special player,” said teammate Joel Eriksson Ek, who was on the ice as Kaprizov scored. “Every time he gets the puck, you can feel it in the arena. It’s amazing the things he does. He’s just creating all the time, and it doesn’t really matter who’s close to him. He can create a lot and he’s been really good for us.”

Eriksson Ek, Victor Rask and Nico Sturm also scored for Minnesota, which has won three of its past four games and has points in five straight. The Wild started the day one point behind Colorado for second in the West Division. The Avalanche played at Los Angeles later Friday.

Kaapo Kahkonen made 22 saves for Minnesota.

“Yeah there’s a lull, I think,” Wild coach Dean Evason said of Friday’s game after a series of hard-fought games against likely playoff teams. “We’ve been playing some pretty intense hockey, great. I think it’s natural, but I also think we should have been able to recognize it and gear it up and again. We praised our group. Tonight, we didn’t respond properly. Tomorrow, we need to.”

The teams finish their season series on Saturday in Minnesota.

“I think we’ve turned through the adversity into a very resilient group,” Ducks coach Dallas Eakins said. “I think our minds have been calloused by all the difficult circumstances and the season that we had. … I know next season is a long way off, but how we respond down the stretch here was going to be very, very important moving into next year. Our effort has been very, very good down the stretch.”

Kaprizov, perhaps the frontrunner for the league’s top rookie , has had a flair for the dramatic all season. The 24-year-old Russian has two overtime goals and three game-winning goals this season.

He has 11 goals in his last 13 games and started the day tied for first in the NHL in goals since April 17.

“Every night he seems to do something different and finds a way to make an impact on the game,” Wild Ryan Suter said. “It just shows what kind of player he really is. He’s on fire and we have to keep him going.”

Zach Parise was a healthy scratch by Minnesota for the second time this season. Parise has been playing in a bottom two-line role for much of the season. He is one shy of his 200th goal as a member of the Wild.

Meanwhile, Ryan Getzlaf was out of the lineup for Anaheim, the second time he’s been scratched this season without an injury. Eakins said it was a “maintenance day” for Getzlaf, who has five goals and 12 assists this season, and will likely see his 13-season streak of leading the team in assists end this year.

Henrique had a goal and assist in his return after missing six games while in the COVID-19 protocol. Ducks Josh Manson returned to the lineup after missing seven games with an upper-body injury.

Kevin Fiala was back in Minnesota’s lineup after missing one game with a lower-body injury.