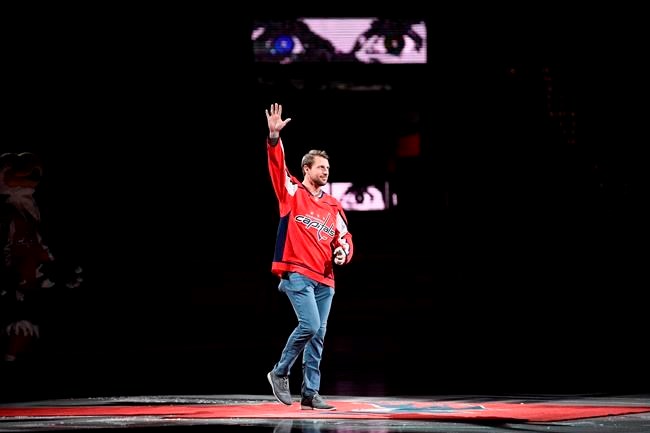 That might be this season the way he's going.

Carlson tied Edmonton captain Connor McDavid for tops in the NHL with 17 points and leads the league with 14 assists.

The 29-year-old Carlson assisted on one of Oshie's goals and scores by Nic Dowd and Michal Kempny in the Czech return from a hamstring injury. Kempny and Carlson played together during the Capitals' 2018 Stanley Cup run.

Already the seventh in NHL history with 14-plus points in his first eight games of the season and the first to do so in 30 years, Carlson has six multipoint games in nine opportunities.

Oshie got credit for his first power-play goal when Rangers Marc Staal knocked the puck into his own net. He deflected Carlson's point shot past New York goaltender Henrik Lundqvist for his second.

Kempny drove to the net and scored in the first period of his first game action since tearing his left hamstring in March and undergoing surgery in April.

"I felt pretty good, actually," Kempny said. "My legs felt good. Obviously not an easy situation for me. But I got to say just thank you to all of the staff, whole organization, my teammates, my family, my friends who were supporting me all the way through here and help me. It means a lot to me."

Braden Holtby stopped 26 of 28 shots to bounce back from a rough start Monday against Colorado.

"I didn't really like how I was playing," Holtby said. "It was nice to get a couple days to work on a couple things, get back to feeling comfortable in certain situations. It wasn't perfect tonight, but it's going in the right direction."

At the either end of the ice, Lundqvist stopped Jakub Vrana on a penalty shot and made 29 saves to help keep New York in the game in the second half of a back-to-back set. Pavel Buchnevich had a power-play goal, and top addition Artemi Panarin scored his third of the season for the Rangers, who have only played five games this season to Washington's nine.

Coach David Quinn was not too thrilled about how his team defended against Washington.

"We were just weren't mentally sharp at all," Quinn said. "We lost our way, and no matter what structure we were supposed to be in, there was a lot of purposeless hockey tonight."

NOTES: The Capitals have won seven in a row against the Rangers. ... Garnet Hathaway sealed it with an empty-net goal with 27.7 seconds left. ... With an assist on Kempny's goal, Capitals captain Alex Ovechkin registered his 1,219th point and passed Jean Beliveau for 42nd on the career scoring list. ... Capitals D Jonas Siegenthaler played two nights after colliding with teammate Richard Panik during a game against the Maple Leafs and leaving with a left shoulder injury. Panik was placed on long-term injured reserve with an upper-body injury and will miss at least 10 games. ... F Brendan Lemieux returned to the Rangers lineup, replacing Greg McKegg. ... Nationals ace Max Scherzer dropped a baseball as part of a ceremonial faceoff to Washington's first World Series appearance since 1933.

Rangers: After three games in 17 days to start the season, New York continues a busy stretch by hosting the Vancouver Canucks on Sunday.

Capitals: Open a five-game road trip Sunday at the Chicago Blackhawks, with stops in Calgary, Edmonton, Vancouver and Toronto to follow.