Jack Hughes had a goal and an assist, leading the New Jersey Devils to a 4-2 preseason win over the New York Rangers on Friday night. Hughes, the No. 1 overall pick in the draft, centred a line with Taylor Hall and Kyle Palmieri.
0
Sep 21, 2019 12:20 AM By: Canadian Press 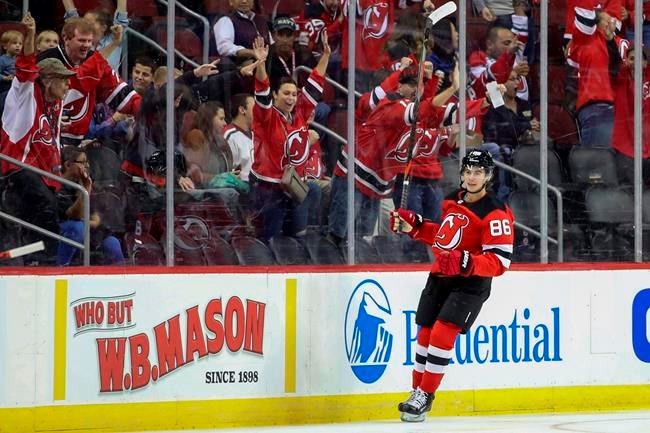 Jack Hughes had a goal and an assist, leading the New Jersey Devils to a 4-2 preseason win over the New York Rangers on Friday night.

Hughes, the No. 1 overall pick in the draft, a line with Taylor Hall and Kyle Palmieri. It was Hall's first game since December after he had arthroscopic surgery on his left knee.

The 18-year-old Hughes opened the scoring with a breakaway goal 34 seconds into the game. He also set up Hall's power-play goal 11:55 into the first period.

Vladislav Namestnikov and Brett Howden scored for New York in Newark, New Jersey. In his first game of the preseason, Henrik Lundqvist made 21 saves on 24 shots before being replaced by Adam Huska, who finished with 15 saves.

In Tampa Bay, reigning NHL MVP Nikita Kucherov scored two third-period goals to lead the Lightning to a 3-1 win over the Nashville Predators.

Alexander Volkov also scored in the third for Tampa Bay, which trailed 1-0 after two.

Kucherov's first goal, at 19:21, was the game winner. His second, 23 second later, ended the scoring.

Curtis McElhinney made 31 saves for the Lightning.

Anthony Beauvillier scored his second goal of the night in overtime, helping the New York Islanders top the Red Wings 4-3 in Detroit.

Trailing 3-2 with less than two minutes remaining in regulation, Beauvillier tied the game with a backhander. His game-winner was a snap shot 32 seconds into the extra period.

Derick Brassard and Devon Toews also scored for New York, which had Semyon Varlamov and Christopher Gibson split the game in goal. Varlamov made 15 saves in the first two periods. Gibson allowed two goals on 11 shots in the third, and did not see a shot in overtime.

Auston Matthews and Andreas Johnsson each had a goal and an assist, and the Toronto Maple Leafs beat the Buffalo Sabres 3-0 for their first preseason win.

Linus Ullmark started for the Sabres and stopped 21 shots in 40 minutes. Andrew Hammond played the third period and made 10 saves.

David Perron scored 1:58 into overtime to lift the St. Louis Blues to a 4-3 victory over the Winnipeg Jets.

Perron also tied the game with 33 seconds remaining in the third after Gabriel Bourque had given the Jets a 3-2 lead at the 16:59 mark of the period.

Nikolaj Ehlers had a goal and an assist for Winnipeg in his first preseason game. Adam Lowry also scored.

Connor Hellebuyck, also playing his first exhibition game, made 15 saves for the Jets.

Jake Allen was in net for two periods for the defending Stanley Cup champions, stopping 18 of 20 shots. Ville Husso replaced him for the third and made 10 saves.

Ryan Nugent-Hopkins scored a short-handed goal in the second period, and the Edmonton Oilers pulled away for a 6-2 exhibition win over the Calgary Flames.

Sam Gagner had a goal and two assists for host Edmonton. Zack Kassian and Leon Draisaitl each finished with a goal and an assist.

Nugent-Hopkins' short-handed goal tied it at 2 with 5:01 left in the second. Joakim Nygard put Edmonton ahead to stay 17:09 into the second, and Kassian, Draisaitl and Gagner scored in the final period.

Sam Bennett and Ryan Lomberg scored for Calgary. Jon Gillies surrendered five goals on 21 shots, two of them on the short side.