COLUMBUS, Ohio — Mikhail Grigorenko scored the go-ahead goal in the third period and lifted the Columbus Blue Jackets to a 4-2 comeback victory over Nashville, preventing the Predators from clinching a playoff spot Wednesday night.
May 5, 2021 10:29 PM By: Canadian Press 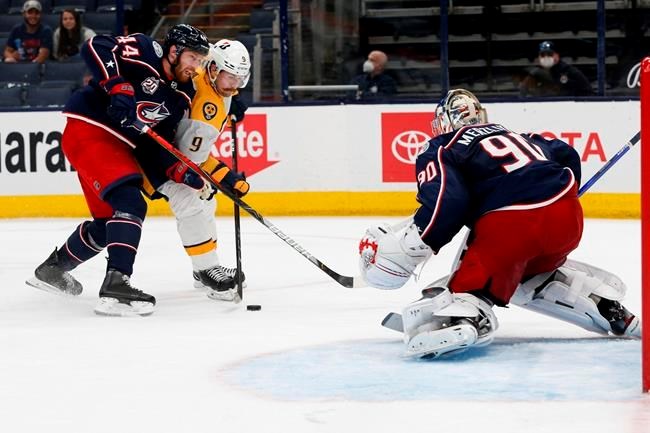 COLUMBUS, Ohio — Mikhail Grigorenko scored the go-ahead goal in the third period and lifted the Columbus Blue Jackets to a 4-2 comeback victory over Nashville, preventing the Predators from clinching a playoff spot Wednesday night.

Oliver Bjorkstrand had two goals, including an empty-netter with less than a second remaining, and Jack Roslovic also scored for the Blue Jackets, who stopped a two-game skid and won for just the second time in 12 games. It also marked the fifth straight game (2-0-3) Columbus has earned a point.

Elvis Merzlikins ended with 30 saves for his eighth win.

“The second period, we started turning things over a little bit, and we gave them an advantage,” Columbus coach John Tortorella said. “Elvis made some saves when we needed. We bent, but didn’t break. We found other ways to score.”

Tanner Jeannot and Calle Jarnkrok scored for Nashville, which sits in fourth place in the Central Division. The Predators maintained a four-point lead over Dallas, which lost to Tampa Bay 6-2. The Stars have one game in hand.

“We had some good looks,” Jeannot said. “We just didn’t get all the bounces tonight .We worked hard. We had some sustained pressure out there, just some mini-breakdowns, and they made us pay for it.”

Nashville took a 1-0 lead first on Jeannot’s first-period goal, but Roslovic pulled Columbus even with his 100th career point at 17:52.

Jarnkrok put the Predators back on top with 2:07 left in the second. But that lead was short-lived as Oliver Bjorkstrand tied it at 2 with a wrister from the right circle at 19:09.

Grigorenko put Columbus ahead for good at 13:50 of the third when he redirected Vladislav Gavrikov's shot.

Juuse Saros stopped 23 shots for Nashville and gave up more than two goals for just the sixth time this season.

“Both teams played hard,” Nashville coach John Hynes said. “They wanted to find a way to win the game, and we didn’t do enough to win it.”

Bjorkstrand played in his 300th NHL game. He leads Columbus in all three major statistical categories this season with a 16-25-41 line. ... Cam Atkinson earned the primary assist on Roslevic’s goal for his 400th NHL point. ... Tortorella earned his 672nd career win, tying him with Mike Keenan for 12th place in NHL history.

Merzlikins skated to the bench in the closing minute to tell Tortorella he would be attempting to score a goal into the empty Nashville net.

“That’s the fastest I’ve seen him skate since he’s been here," Tortorella said. "He was ready to go.”

“It’s hard to get into the playoffs. We have to do a job. When there are big games, there are tough losses. Is this a tough loss? Yeah, we all feel it, but it’s how you’re able to respond to this.” — Hynes after the Predators fell to the Blue Jackets.