ANAHEIM, Calif. — When Carter Rowney's short-handed goal sailed into the Carolina net, the Anaheim Ducks had scored nine consecutive goals across two games against two of the best teams in the Eastern Conference.
Oct 19, 2019 1:49 AM By: Canadian Press 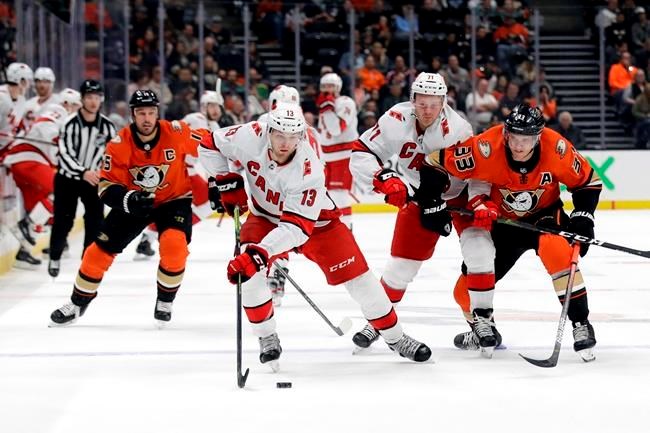 ANAHEIM, Calif. — When Carter Rowney's short-handed goal sailed into the Carolina net, the Anaheim Ducks had scored nine consecutive goals across two games against two of the best teams in the Eastern Conference.

A few months after the Ducks missed the playoffs, they've started superbly under a new coach preaching speed, discipline and fun.

Adam Henrique and Troy Terry scored in the first period, Ryan Miller made 22 saves and the Ducks remained unbeaten at home with a 4-2 victory over the Hurricanes on Friday night.

Rowney scored early in the second period to put the Ducks up 4-0, chasing Carolina goalie Petr Mrazek during a tremendous offensive surge by the NHL's lowest-scoring team last season. Jakob Silfverberg also scored in the second period for the Ducks, who are off to a 6-2-0 start under new coach Dallas Eakins after missing the last spring for the first time since 2012.

"If we just keep working hard and rolling, we know we're going to be a tough team to play against," said revitalized forward Rickard Rakell, who had two assists. "We feel good right now. We don't fear anything. We create a lot of scoring chances now. It's a lot of fun playing this way."

The Ducks have won their first four games at Honda Center for the first time in five years. After falling behind 2-0 to Buffalo on Wednesday night, the Ducks scored five straight to beat the Sabres and then jumped to a four-goal lead on the Canes, much to the delight of a home crowd supporting a team that managed an NHL-low 196 goals last year.

"We've got a group in there that's all pulling in the same direction, and it's fun to watch," Eakins said. "(This win) gives us confidence. That's a team over there that's had a great start. They had a hell of a season last year, and for us to come in and be able to skate with them, it reinforces what we're trying to build."

Haydn Fleury scored his first NHL goal for the Hurricanes, who lost in two of their three stops on a California road swing after a 5-1-0 start to the season. Erik Haula scored the Canes' opening goal before leaving with an injury shortly afterward from a check by Anaheim's Josh Manson.

Mrazek yielded four goals on 14 shots, with Rowney's impressive short-handed score ending his night. Mrazek has alternated starts with James Reimer all season, and he posted his 19th career shutout against the Kings on Tuesday.

"I hate doing that," Carolina coach Rod Brind'Amour said of his first in-game goalie change of the season. "It's not his fault. We hung him out to dry. We had a lot of guys sleeping tonight. I didn't need to see him in there getting hung out to dry."

Haula tipped home a power-play goal midway through the second period, getting his sixth in nine games to start the season. He went to the dressing room moments later after going down hard on an apparently clean check into the boards from Manson, who wasn't penalized.

Haula has an upper-body injury, and he will be re-evaluated in Raleigh. Carolina enforcer Joel Edmundson fought Manson a few minutes later.

"That's a good teammate, right?" Brind'Amour said of Edmundson. "He sees one of his guys get, he feels, gets cheap-shotted, and he stood up for him. So it says a lot about him for sure."

Fleury scored his first goal in his 96th NHL game, walking in from the blue line for an unobstructed shot. The 23-year-old is in his third season with Carolina.

"This year, I felt from the first game that I've had chances to score each night," Fleury said. "Hit a post against Tampa, and now we are here."

Miller was strong in a scoreless third period. The 39-year-old veteran backup to John Gibson has yielded three goals in his two starts.

"There was no flow to that game," said Brind'Amour, who played 1,643 games in his two-decade NHL career. "It was one of the worst hockey games I've been around."

Hurricanes: A five-day break before visiting the Columbus Blue Jackets on Thursday.