MONTREAL — Dominique Ducharme felt helpless. The Montreal Canadiens interim head coach — hours after testing positive for COVID-19 — was sitting at home as his team battled in the third round of the Stanley Cup playoffs.
Jun 20, 2021 2:09 PM By: Canadian Press 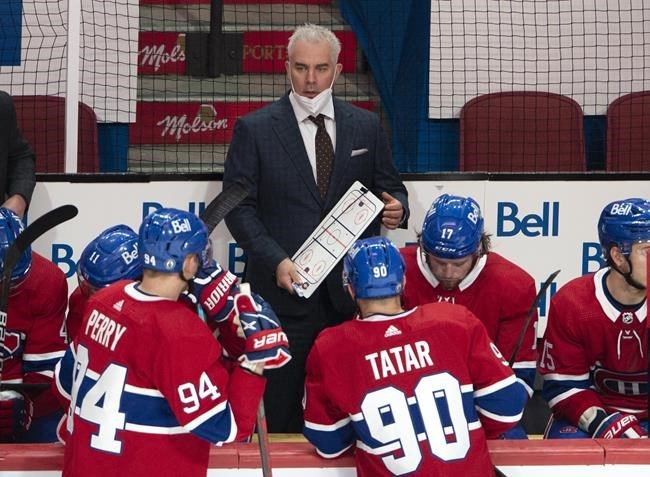 The Montreal Canadiens interim head coach — hours after testing positive for COVID-19 — was sitting at home as his team battled in the third round of the Stanley Cup playoffs.

And all he could do was watch.

"It's tough to describe," Ducharme, who isn't experiencing any symptoms, said during a virtual media availability Sunday morning.

"It's a weird situation. I've never been through that."

The Canadiens pulled out a thrilling 3-2 overtime victory over the Vegas Golden Knights in Friday's Game 3 of their best-of-seven matchup with Ducharme isolating at home and assistant Luke Richardson taking the coaching reins.

Ducharme spoke with the team virtually before and after Friday's contest, and again on Saturday in preparation for Sunday's pivotal Game 4 at the Bell Centre.

As of Saturday evening, no members of the Canadiens had been added to the NHL's COVID-19 protocol list. The league said in a statement Friday that all other tests on Montreal players and staff in the preceding 48 hours came back negative.

The series is the first cross-border matchup in the NHL this season, made possible by a federal exemption allowing teams to bypass Canada's 14-day quarantine requirements.

Ducharme said it was a big surprise to learn he had contracted the coronavirus. The team received its second vaccine dose June 9, meaning the positive test came six days short of the two-week threshold to be deemed fully vaccinated.

"It's frustrating," he said. "We've worked all year to be here. I've been waiting for that moment personally for sure for a long time.

"I want to be back as soon as possible."

NHL and Quebec government COVID-19 protocols suggest Ducharme won't be eligible to return before the end of the third round, and possibly into the Stanley Cup final should Montreal advance. However, Ducharme appeared to indicate that timeline could change.

"It's a different situation that we're in," Ducharme said. "Hopefully, I can be back earlier."

The Canadiens arrived in Vegas last week for Games 1 and 2, but were restricted to their hotel, meal room, gym and T-Mobile Arena. Ducharme said players and staff weren't even allowed to take a walk outside.

"It's frustrating because I've been doing everything that they've asked us to do," said the 48-year-old, who added no one in his family bubble has tested positive. "I never exposed myself.

Canadiens winger Corey Perry said even though there isn't any need for extra motivation with the team two wins from its first final since the franchise's last title in 1993, Montreal now has it with Ducharme looking on from his couch.

"It's an unfortunate situation," Perry said. "We know he wants to be here as much as anybody. Once he comes out of this, hopefully we're still going and he can come back and just step right back in."

Ducharme was promoted to interim head coach in February when Claude Julien and associate coach Kirk Muller were fired with the Canadiens in a tailspin.

He guided the club through a difficult, pandemic-truncated season that included a COVID-19 shutdown in March and a string of injuries to key players down the stretch.

Montreal finished fourth in the Canadian-based North Division, but upset both the Toronto Maple Leafs and Winnipeg Jets in impressive fashion to make the semifinals.

"Dom's done a great job steering the ship," Canadiens defenceman Ben Chiarot said. "He's passionate about this team. You can only imagine how he feels sitting at home watching."

Dr. Theresa Tam, Canada's chief public health officer, told the House of Commons health committee before Ducharme's positive test was confirmed that although the country is fortunate to have vaccines available, none are 100 per cent effective, even with two doses.

"If a vaccine is 80 per cent effective, you might still get a fifth of the population, even after vaccination ... susceptible to infection," she said Friday. "But what we do know is in general these infections are going to be milder. So the prevention of serious outcomes is also very key."

"Sports teams have to have protocols," Tam added. "So at this time, these type of games are performed under the auspices of public-health departments that have safety plans in place so that should someone become positive, they don't spread that virus to a lot of other people."

Despite his disappointment, Ducharme was pleased with how Richardson handled the Canadiens' bench in his absence to pick up the former defenceman's first NHL coaching victory.

"He's a great teammate," Ducharme said. "You want a guy like that on your side. He's a true person.

"He's the best teammate you can have."

Ducharme would just prefer to be standing shoulder-to-shoulder on the bench.

"You feel helpless, just watching and hoping for the best," he said. "Special situation, but it's been a special year.

"We've been through a lot, and we'll get through that."