EDMONTON — The Chicago Blackhawks dressed in the Edmonton Oilers dressing room then proceeded to eat their lunch, pushing the Oilers to the edge of the abyss in the NHL playoffs with a stunning 4-3 comeback win Wednesday night.
Aug 6, 2020 11:34 AM By: Canadian Press 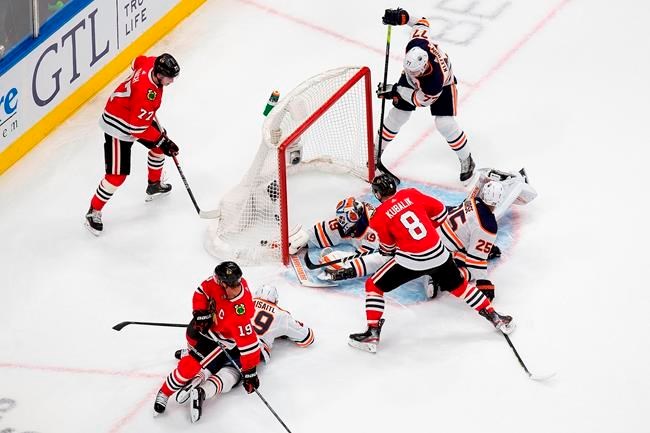 EDMONTON — The Chicago Blackhawks dressed in the Edmonton Oilers dressing room then proceeded to eat their lunch, pushing the Oilers to the edge of the abyss in the NHL playoffs with a stunning 4-3 comeback win Wednesday night.

With a victory Friday the Hawks, the bottom-seeded Western Conference team, can knock out the fifth-seeded Oilers and send home the NHL's two top scorers, Connor McDavid and Leon Draisaitl.

The Blackhawks lead the best-of-five qualifying series 2-1, but late in the game Wednesday it looked like they would be the ones facing elimination.

The Hawks were down 3-2 in the penalty-filled affair at Rogers Place, when they blitzed the Oilers for two goals with less than six minutes left in the game.

Matthew Highmore tipped in a Slater Koekkoek point shot to tie the game at three, then captain Jonathan Toews scored his second of the game with just over a minute left for the game winner.

On the winner, Oilers Ethan Bear errantly tipped a Chicago point shot off Toews and past goalie Mikko Koskinen. It was Toews' fourth goal of the series.

"We stuck with it and I think it was a great team effort," Toews said.

"(There were) some great contributions from all over our lineup.

"A one-goal lead is a tough lead to hang onto for that long. In that situation we can always simplify our game and put pucks down in their zone ... and eventually things develop."

Olli Maatta also scored for Chicago while Draisaitl scored two and McDavid added another for Edmonton.

"I think we have to be a little more disciplined. It kills the flow of the game with the penalties.

"We've got to make sure we win the next two."

The Oilers had to play without Adam Larsson, their first-pairing shutdown defenceman. Larsson was declared unfit to play prior to puck drop.

The NHL is not divulging details on injuries or whether individual players have tested positive for COVID-19.

The Oilers went down another player late in the second period when Tyler Ennis got checked into the boards by Hawk centre Kirby Dach behind the Oilers net, involving knee-on-knee contact that left Ennis writhing on the ice. He had to be helped off, not putting any weight on his right leg.

It was a back and forth game but tighter checking than the first two freewheeling games in the series.

The Oilers struggled to get a rhythm going, taking seven penalties in the first two periods but managed to allow only one goal with the man advantage.

Maatta opened the scoring at 9:23 of the first period with a slapshot from the blue line through traffic past a screened Koskinen. Draisaitl responded 28 seconds later, one-timing a no-look pass through the crease from Ennis past Chicago goalie Corey Crawford.

Dach gave Chicago the lead late in the first when he centred the puck into a scrum of bodies in the crease. The puck bounced off Toews' skate and in.

The Oilers tied the game early in the second period. Catching the Hawks running around in their own end, Oilers defenceman Matt Benning stepped into a blue-line slapshot that bounced off Crawford's pad to Draisaitl, who pounced on the rebound to make it 2-2.

Edmonton took the lead late in the second frame when McDavid scooped up a rebound off a Draisaitl shot for his series-leading fifth goal, setting the stage for Chicago's stunning comeback.

Andreas Athanasiou joined the Draisaitl line in place of Ennis.

The Hawks wore their red jerseys as the "home team" and, in another weird twist in the Year of COVID, dressed under the big orange Oilers logo set into the ceiling in their dressing room.

But there is no advantage in these hub-bubbled playoffs to being "home" beyond having the last shift change. The seats are empty, covered over in blue tarps, and the pump-up arena music is played for both teams when they go on the power play.

This report by The Canadian Press was first published August 5, 2020.

Note to readers: This is a corrected story. A previous version had the incorrect scorer for Chicago's winning goal.