Cassidy gets full chance for aggressive strategy with Bruins

BOSTON — For the first time since 2006, the Boston Bruins are entering the season with someone other than Claude Julien as their head coach.
Sep 27, 2017 7:38 PM By: Canadian Press 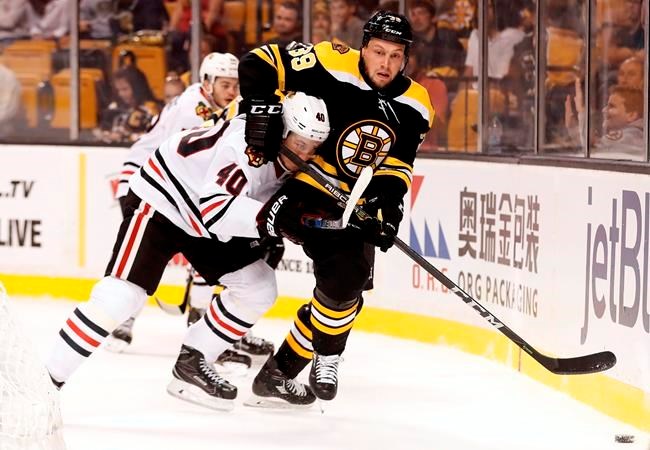 BOSTON — For the first time since 2006, the Boston Bruins are entering the season with someone other than Claude Julien as their head coach.

After they decided to fire Julien and promote assistant coach Bruce Cassidy to the lead job in February, the Bruins went 18-8-1, increased their scoring by nearly a goal per game an earned their first berth in the Stanley Cup playoffs in three seasons.

The Bruins then lost a six-game Eastern Conference first round series to the Ottawa Senators - a series that featured each game decided by one goal.

In an effort to build off last season, the Bruins brought back Cassidy as the full-time coach to continue to implement his high-pace strategy emphasizing aggression, strong skating and conditioning. Cassidy's skating drills in training camp sent a message to the Bruins players.

"The game's a skating game and being able to outlast your opponent and skate well is certainly a necessity," forward David Backes said. "So I think he trends toward that skating game, being in great shape."

The Bruins will also look to continue their rebuild with more youth dotting their roster. General manager Don Sweeney has continued to implement his rebuild plan and there could be as many as five or six first- or second-year NHL players in the lineup.

That should give the veteran core led by Patrice Bergeron, Zdeno Chara, Brad Marchand, David Krejci and Tuukka Rask an extra jolt.

"We have some really good players that have come in and shown that they're ready to play," said Marchand, the Bruins' leader in goals (37) and points (85) last season. "We have some spots available, and that's what you need in today's NHL, to have young guys comes in and produce and can carry a bit of the load. We definitely have some guys that are going to be able to do that. ... It's going to help us not only this year but the next five or six years."

Here are more things to know about the Bruins:

BERGERON'S HEALTHY: Bergeron won his fourth Selke Trophy as the best defensive forward in the NHL last season. However, he was playing through a sports hernia surgery he suffered during Canada's run to the championship at the 2016 World Cup of Hockey in the fall and had to have surgery in May. Bergeron's point total dropped from 68 in 2015-16 to 53 last season, but post-surgery he could be able to increase his point protection to go along with his proficient defensive play.

SCHOOL'S OUT: Three top Bruins prospects left college early and could be fixtures in the lineup this season. Charlie McAvoy, who left Boston University after his sophomore season, already contributed in the playoffs by averaging 26:12 on the Bruins' top pair during the six-game loss (his first six NHL games). Center Jakob Forsbacka Karlsson and wing Anders Bjork left BU and Notre Dame, respectively, and could bolster the Bruins up front.

CHARA'S LAST HURRAH: Sweeney and Chara have both expressed a desire to agree on a contract extension that would keep the 6-foot-9 captain in a Bruins sweater. But the 40-year-old is entering the final year of a seven-year, $45.5 million contract and until Chara signs there will be questions about his future. He led the Bruins in ice time at 23:19 per game and had 29 points (10 goals, 19 assists) in 75 games last season.

BACKES NEEDS BOUNCE BACK: Forward David Backes signed a five-year, $30 million contract as an unrestricted free agent with the Bruins last season. A combination of injuries and off-ice distractions contributed to him providing the Bruins a disappointing 38 points in 74 games. At 33 there are questions about his ability to produce more but the Bruins are banking on him anchoring a strong third line.

POWER'S ON: With McAvoy and Torey Krug quarterbacking each of the Bruins' two units, the power play should be strong again. Boston finished seventh in power-play efficiency last season and has enough offensive talent to balance out each group nicely this season.