WASHINGTON — Shea Weber scored to extend his points streak to five games, Carey Price made 25 saves and the Montreal Canadiens responded to a big hit by Alex Ovechkin on Jonathan Drouin, beating the Washington Capitals 5-2 on Friday night.
Nov 15, 2019 10:33 PM By: Canadian Press 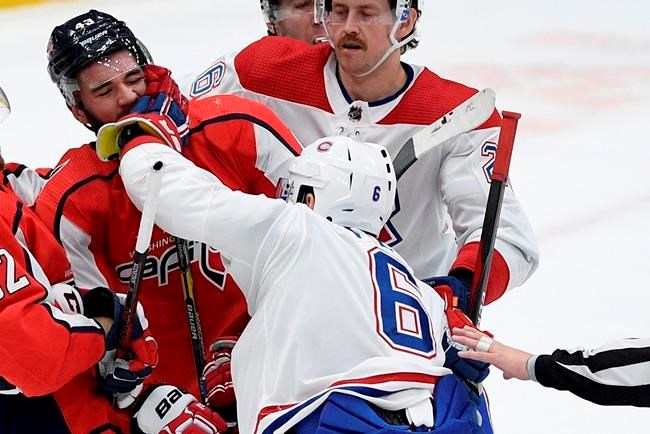 WASHINGTON — Shea Weber scored to extend his points streak to five games, Carey Price made 25 saves and the Montreal Canadiens responded to a big hit by Alex Ovechkin on Jonathan Drouin, beating the Washington Capitals 5-2 on Friday night.

Phillip Danault, Weber, Jordan Weal and Nick Suzuki scored after Ovechkin flattened Drouin with an open ice hit that knocked him out for the rest of the second period. Drouin returned for the third.

Ovechkin’s shoulder-to-shoulder blow on Drouin was the first big highlight of the night after a ho-hum first period. Ovechkin appeared to leave his feet to deliver the blow, and Drouin was slow to get up before skating to the bench and going down the tunnel.

Four goals in 11 minutes after the hit provided enough support for Price, who beat the Capitals for just the eighth time in 27 career games. Price’s biggest save came a few shifts after Drouin’s injury when he denied Jonas Siegenthaler and was bailed out by Brett Kulak blocking the rebound, and he made a series of crucial stops in the final minutes.

Ovechkin scored on the power play in the third period, his 14th of the season, and Evgeny Kuznetsov added a breakaway goal with 4:22 left to make things interesting. Tomas Tatar sealed it with an empty-netter.

With the Blue Jackets on a 4-on-3 power play, Werenski buried a shot from the right circle. He has scored in three straight games.

Pierre-Luc Dubois scored for Columbus early in the third period to tie it at 2. Vladislav Gavrikov got his first NHL goal and Joonas Korpisalo made 25 saves for the Blue Jackets.

Mackenzie McEachern and Brayden Schenn scored for the Stanley Cup champion Blues, who lost a second consecutive game in overtime. Jake Allen, starting ahead of Jordan Binnington on the first night of a back-to-back, had 36 saves.

Charlie Coyle had a goal and an assist, Zdeno Chara added a goal, and Tuukka Rask made 29 saves. The Bruins snapped a 0-2-2 skid.

Auston Matthews and Kasperi Kapanen scored for Toronto, and Frederik Andersen made 30 saves. The Maple Leafs have dropped four straight games, the last three in regulation.

Jack Johnson scored for Penguins and Matt Murray made 19 saves.

Ottawa’s Colin White took a double minor for high-sticking Claude Giroux with just over four minutes remaining. The Flyers pulled Carter Hart for a two-man advantage, but were unable to score.