Max Domi dreams of suiting up in the playoffs. If the NHL expands its post-season format to complete the 2019-20 season, the Canadiens centre might get that chance sooner than expected.
May 15, 2020 2:54 PM By: Canadian Press 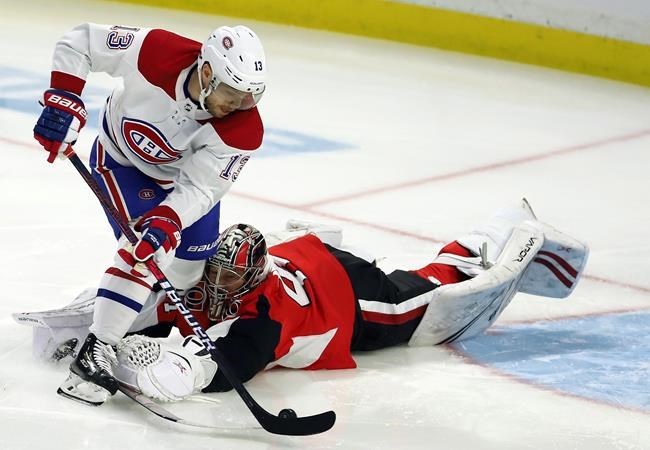 Max Domi dreams of suiting up in the playoffs.

If the NHL expands its post-season format to complete the 2019-20 season, the Canadiens centre might get that chance sooner than expected.

Montreal sat 12th in the Eastern Conference and was destined to be on the outside looking in for a third straight spring — and the fourth time in five years — when the COVID-19 pandemic forced the league to press pause March 12.

In the two months since that surreal day, plenty of scenarios have been rumoured and discussed as possibilities if the NHL eventually gets the green light from public and government officials to resume, with the latest being a 20- or 24-team playoff tournament.

A 20-club format wouldn't include the Canadiens, but they'd just sneak in under the second option. Montreal was 24th in the overall standings with a pedestrian 31-31-9 record, and 24th in points percentage, when the season was suspended.

Domi didn't want to discuss hypotheticals on a conference call with reporters this week, but he's hungry for post-season hockey.

"Oh man, it's my dream to play in the playoffs. It's everyone's dream," said Domi, a veteran of 375 NHL games. "It's very difficult to get there.

"I can't speak to what it's like. I haven't experienced that."

Drafted 12th overall by the Phoenix Coyotes in 2013, Domi's last post-season outing came in the spring of 2015 with the Ontario Hockey League's London Knights.

He didn't get close to the playoffs in three NHL campaigns in the desert before getting traded to the Canadiens for Alex Galchenyuk in June 2018. Montreal finished with an agonizing 96 points last season, but even that wasn't enough to secure the East's second wild-card berth.

The 25-year-old has been part of big moments — he played in three straight Memorial Cups with London and was a member of Canada's gold-medal winning 2015 world junior team — and watched his father, former Toronto Maple Leafs tough guy Tie Domi, battle in memorable post-season clashes.

Now he wants his turn.

"Everyone elevates their game to a whole other level," Max Domi said of grinding for the Stanley Cup. "It's night and day from an 82-game regular-season schedule.

"It's an absolute war out there."

And that style should be right in Domi's wheelhouse.

Skilled enough to make plays and distribute the puck, the five-foot-10, 192-pound forward isn't afraid to throw his weight around, trash talk opponents or go to the dirty areas of the ice — all hallmarks of playoff battles.

If the NHL holds a post-season tournament this summer and the Canadiens are included, it could be a chance for Domi, who's set to become a restricted free agent after completing the final season of a two-year, US$6.3-million contract, to show his value when the chips are down.

"We believe in each other," Domi said of a team that would be backstopped by a rested Carey Price in goal. "We know we can win hockey games. Whoever that's against, wherever that is, I'm sure we'll be ready to play."

A natural winger, the Canadiens have converted Domi into a centre, with mixed results, behind No. 1 option Phillip Danault. Domi registered 28 goals and 72 points in 2018-19, but had just 17 goals and 44 points through 71 games before this season was halted.

"I very much still enjoy playing centre," he said. "That's something that I never would have thought I enjoyed doing as much as I do. I've been a winger for my pro entire career leading up to this. Then trying centre I was like, 'Oh wow, this is a whole different game.' I really enjoyed it."

Domi, who'se been self-isolating and training in Toronto during the novel coronavirus oubtreak, has worked on faceoffs with coaches and veteran teammates — he bumped his average up four points to 48.9 per cent this season — but has also been moved back to the wing at times.

"Totally different position, you've got to adapt, and it takes time," Domi said of playing on the flank. "When you're jumping back and forth, you lose that groove. If you want to play wing and you want to stay there and get better, obviously to master that craft, you've got to do lots of reps."

But wherever he lines up, getting a shot at showing his wares in the playoffs trumps all.

"I will definitely be ready to go," Domi said. "I'm excited about that opportunity whenever it comes."

This report by The Canadian Press was first published May 15, 2020.