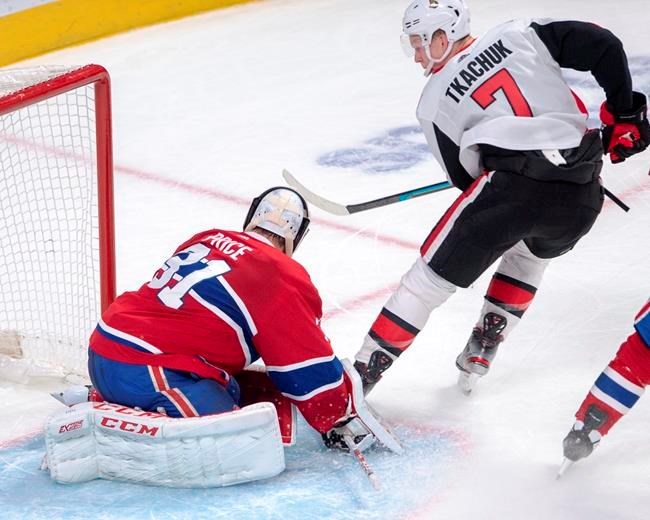 MONTREAL — Jean-Gabriel Pageau is showing no signs of slowing down.

Pageau scored for the second straight game to help the visiting Ottawa Senators defeat the Montreal Canadiens 2-1 in overtime Wednesday night in the second game of a back-to-back for both teams.

The 27-year-old leads the NHL with 10 goals in November and is three shy of a Senators franchise record for most goals in any month.

“It’s obviously a great feeling,” said Pageau, who has 13 goals this season. “I’m feeling confident in my abilities right now and I’m lucky to have the teammates I have right now. We’re playing some really good hockey.

“When I shoot, I always try to score now. That’s something that changes when you play with confidence.”

Shots were 21-8 for Montreal when Pageau beat Carey Price at 9:55 of the second by tipping a shot from Tyler Ennis to tie the game 1-1.

Pageau has nine goals in 20 career games versus the Canadiens — the most against any opponent.

“Everything he touches is going in the net but he’s working for it,” said Senators coach D.J. Smith of his first-line centreman. “He works, he skates, he’s been working in practice and it’s great to see a guy get rewarded.”

Ennis, on a breakaway, nearly gave Ottawa a 2-1 lead in the final minute of the second but Price made the blocker save.

The visitors kept coming in the third. Price denied Ennis on a Senators power play early on, moments after Anthony Duclair missed the net from the slot. Ottawa's league-worst power play finished 0 for 3.

Brady Tkachuk scored 38 seconds into overtime and Craig Anderson stopped 35 shots for his fourth win of the season.

The Senators have won four of their past five games and improved to 4-7-1 on the road this season.

“We’re still learning and getting better,” said Tkachuk, who went five-hole on Price for the OT winner. “And we’ve improved so much since the start of the year. I definitely think we’re trending in the right direction.

“It’s been a lot of fun coming to the rink every day.”

The Canadiens were the better team in the first period but could not find a goal.

Montreal's 15th-ranked power play got to work in the second period with Nikita Zaitsev in the box for cross-checking.

There was a scramble in front of Anderson and Phillip Danault was first on the puck. Danault passed it back to rookie Nick Suzuki, who easily scored his sixth of the season 44 seconds into the frame.

The Canadiens kept the pressure on Ottawa, firing pucks on Anderson from every angle but the Sens netminder was equal to the task.

Anderson made a big glove save on Brendan Gallagher in overtime, seconds before Tkachuk scored the winner.

“Our goal-scoring has hit a wall and it’s hurting us.”

Price stopped 22-of-24 shots, a day after conceding five goals in Columbus.

Ottawa defeated the Red Wings 4-3 in Detroit on Tuesday while the Canadiens lost 5-2 at the Blue Jackets.

The Sens were down a forward for most of the game. Winger Vladislav Namestnikov left in the first period after falling awkwardly into the boards on a hit from defenceman Cale Fleury. He did not return.

Notes: Senators forward Bobby Ryan joined the league's player assistance program, the NHLPA announced Wednesday. … Former Canadiens captain and coach Guy Carbonneau, who was inducted in the Hockey Hall of Fame this week, was honoured in a pre-game ceremony.