Boudreau, Wild using 'good is not good enough' as motto

ST. PAUL, Minn. — Bruce Boudreau brought his mastery of the regular season to Minnesota last season, and the Wild aced that test behind their new head coach.
Sep 27, 2017 7:18 PM By: Canadian Press 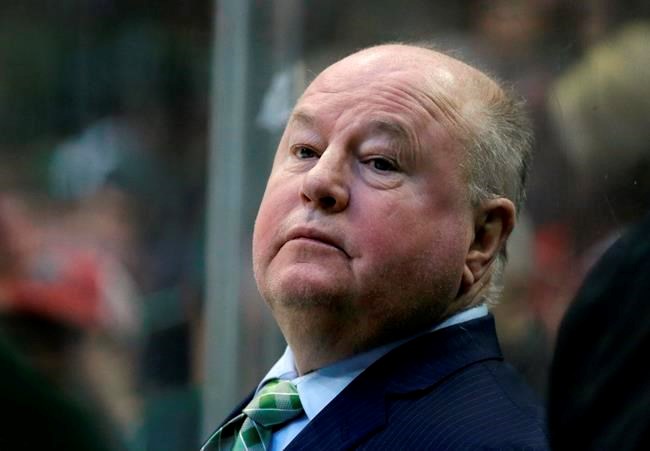 ST. PAUL, Minn. — Bruce Boudreau brought his mastery of the regular season to Minnesota last season, and the Wild aced that test behind their new head coach.

Playing deep into the and, of course, hoisting that Stanley Cup is still the elusive goal for all involved.

"Our motto this year is 'good is not good enough,' because we're always good," Boudreau said. "We want to strive to be better than good. We want to be great."

The franchise-record 106 points the Wild compiled last season, good for second best in the Western Conference, ultimately fell in the "not good enough" category after a five-game loss in the first round of the playoffs to the St. Louis Blues. In 17 years of existence, the Wild have only won four out of 12 series. They've reached the final four just once, in 2003.

Boudreau, who leads all active NHL coaches in winning percentage, is 5-9 in playoff series. He has reached the conference finals only once, in 2015 with the Anaheim Ducks. So there's no hiding from this reality of the lack of spring success.

"We think we've got a team that's built to win," Boudreau said, adding: "If they're as hungry and upset about the way things ended after having six really good months, and if we come out with that hunger, I think we'll be really good."

Owner Craig Leipold told reporters recently that "anything short of winning the Stanley Cup would be a disappointment," a bold proclamation from a boss who's been exceptionally patient since buying the club nearly 10 years ago. General manager Chuck Fletcher has entered his ninth season on the job.

With captain Mikko Koivu (age 34) and the $98 million men, left wing Zach Parise (age 33) and Ryan Suter (age 32), all moving past their prime years, the question was asked of Leipold whether the team is concerned about its window for championship contention closing.

"The window is wide open for us," Leipold said. "We've got some players that are hitting their prime and some young guys coming up we talk about all the time."

The opener at Detroit's new arena is on Oct. 5, with the first home game not until Oct. 14 against Columbus.

Here are some key angles to follow as the season unfolds:

The Wild were able to retain Matt Dumba and Jonas Brodin through the expansion draft, by trading prospect Alex Tuch to Vegas so the Golden Knights would take Erik Haula instead. Marco Scandella was traded to the Buffalo Sabres, though, creating an opening among the top-six blue-liners. Fletcher signed 13-year veteran Kyle Quincey for depth, and returning youngsters Gustav Olofsson and Mike Reilly will be in the mix for a spot in the lineup as well.

Suter, who's expected to be paired with Dumba this season with Jared Spurgeon next to Brodin, expressed confidence in the Wild's ability to replace Scandella.

"Guys are ready to step up to a higher role and have a little bit more pressure on them," Suter said. "I don't think he'd be gone if guys weren't ready."

The Wild made mostly cosmetic moves during the , but perhaps their most important addition was 40-year-old Matt Cullen, the Minnesota native who spent three previous seasons with the team before going to win a pair of Stanley Cup titles with the Pittsburgh Penguins. Cullen will likely anchor the fourth line and provide a calm, wise presence in the locker room.

"He's just a true professional, and that's the guys we like on this team," said Charlie Coyle, who'll probably be able to play right wing instead of with Cullen on the roster. "Easy to work with, easy guy to play with, and that's what everyone likes to see."

Coyle is expected to skate on a third line with left wing Marcus Foligno, who came in the Scandella trade, and 20-year-old Joel Eriksson Ek, the Wild's first-round draft pick in 2015 who appeared in 15 games last season. That's a big trio for opponents to try to move away from the net.

"I think we can be a good one too, wherever we are in our lineup," Coyle said. "Just make sure we're doing what we can and being the big bodies that we are, in the corners, coming out with the puck, winning those one-on-one battles."

Devan Dubnyk logged a career-high 40 wins, a franchise record by a Wild goalie, and finished last season in the top eight in the league in shutouts, save percentage and goals against average. He faded a bit down the stretch, however, while starting 12 of 14 games in a 25-day stretch out of the team's bye week in late February. Dubnyk took eight losses in that span. Alex Stalock is the new backup, replacing Darcy Kuemper, and the Wild will be counting on him being reliable enough for at least 20 starts or so to keep Dubynk fresh.

After having their final 23 games jammed into a 41-day period last season, the Wild appear to have a slightly less taxing finish this time. Their five-day bye week is in mid-January this time. They have only nine games over the final 19 days, though they'll be better off if they can secure a top seed for the playoffs before the last three games. They wrap up the regular season at Anaheim, Los Angeles and San Jose, in a four-day span.