Bettman: NHL Puck and player tracking to start in playoffs 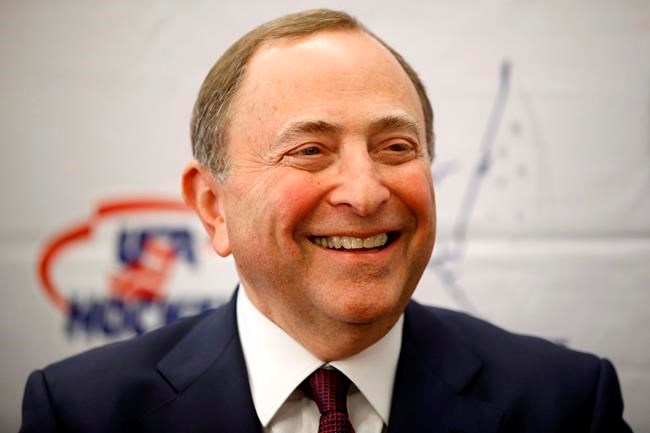 Puck and player tracking is coming to the NHL in the playoffs.

Commissioner Gary Bettman said Friday that puck and player tracking will be up and running in all playoff arenas this spring and is expected to be fully operational leaguewide next season.

“There will be more data than ever before,” Bettman said. “I believe the players will generate something like 200 data points per second and the puck 2,000 data points a second, so in terms of getting inside the game, telling stories, as a fan delving in to get what you're interested in, you're going to be able to do more things than ever before and even imaginable.”

The league will test the system — which is a mix of sensors and optical tracking — during certain games in the regular season. Deputy commissioner Bill Daly said the league hasn't decided which games will be chosen for that testing.

During his annual state of the NHL address, Bettman also revealed there had been a few complaints raised about a team official's since the topic garnered significant attention at the Board of Governors meeting last month. Bettman and Daly said those complaints were investigated, and none turned out to be of significant concern.

"Obviously, what we announced at the board meeting, some people have followed up and there have been some things reported to us," Daly said. “I've gotten a couple calls from clubs who have had issues raised with them. This is I think what I'll expect when we have a platform up and running that people are going to utilize it.”

Bettman also touched on the status of collective bargaining talks with players, a potential deadline to decide about going to the 2022 Winter Olympics in Beijing and the possibility of changing the All-Star format next year.

Four months since owners and players each decided not to opt out of the CBA that goes until 2022, Bettman said the Players' Association has taken a “deep breath” on negotiations. He expects CBA talks to resume in earnest soon, despite the lack of an urgent deadline.

“My expectation is we'll re-engage shortly in a more energetic way than perhaps we've been in the last couple of months,” Bettman said. "Perhaps knowing there's more time than we had going into September, I wouldn't read anything into it other than we're both still focused on it."

Bettman brushed off the notion of a deadline for an Olympic decision set by the International Ice Hockey Federation. He continued to say it's disruptive for the NHL to stop its season to go to the Olympics, which it did five times from 1998 to 2014 before skipping 2018, but didn't rule out sending players to Beijing.

Some international hockey could be coming closer than Asia before 2022. Bettman alluded to having a “distinct international ” at the 2021 All-Star Weekend, which will be hosted by the Panthers in South Florida.

The league and players abandoned plans to hold a World Cup of Hockey as soon as the winter of 2021, but Daly said there's a working model on what might be coming at the next All-Star Weekend. Much like the women's 3-on-3 game at this year's Skills Competition, that event could showcase the U.S.-Canada rivalry and others.

“I think we have a general understanding of what we're talking about and what it looks like,” Daly said