Beating the goalie: Top-shelf shots all the rage in the NHL

The puck was on Leon Draisaitl's stick for maybe one-tenth of a second before the reigning NHL MVP fired it into the net from an absurd angle between the unsuspecting goaltender's glove hand and the post. The dreaded short-side goal.
May 13, 2021 3:54 PM By: Canadian Press 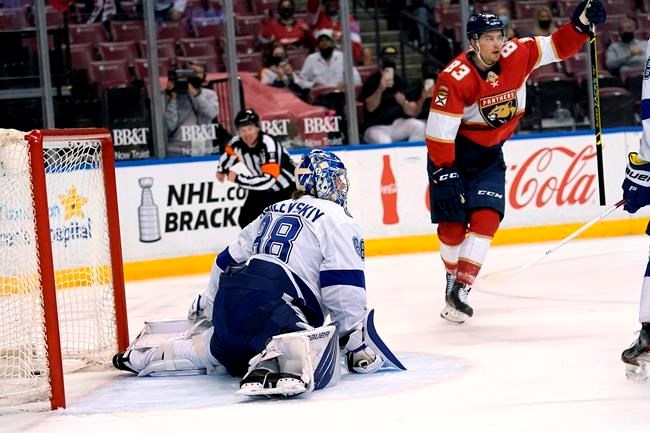 The puck was on Leon Draisaitl's stick for maybe one-tenth of a second before the reigning NHL MVP fired it into the net from an absurd angle between the unsuspecting goaltender's glove hand and the post. The dreaded short-side goal.

“Sometimes you think there’s a better play to be made,” Draisaitl said. “I'm lucky that I made that decision that it went in.”

Luck ain’t got nothin' to do with it. Beating an NHL goaltender is an evolving cat-and-mouse game with shooters, who are more accurate than ever before at picking their spots and have the best sticks ever designed at their disposal.

The result in modern-day hockey is players lighting the lamp with wicked shots over the shoulders of goalies, who almost exclusively turn to the butterfly style of going to their knees to stop the puck, opening up holes high on the glove and stick sides. Yet despite all the league efforts to increase offense, goalies have adjusted to the point that scoring is at its lowest level in four seasons.

“Goalies are evolving,” said Olaf Kolzig, who won the Vezina Trophy as the NHL's best goaltender in 2000. "They try to keep taking things away and they keep adding things to the players — these composite sticks, the unlimited curves — and the goalies, to their credit, just keep finding a way to get the job done.”

The Associated Press interviewed 14 retired goaltenders with at least 100 games of NHL experience ranging from 1965-2020 about the evolution of the position and how equipment for goalies and skaters, video, specialized coaching and analytics have changed the ways goals are scored.

One consensus? Watch any game now, and the puck is most likely to get sniped top corner.

"That’s been going on for way too long," said Kelly Hrudey, who played 762 games from 1983-88 before becoming an analyst for Sportsnet in Canada. “Goals are scored high short-side now — it’s almost like an epidemic. In my opinion, they’re giving away free goals.”

High short-side is how Draisaitl beat Ottawa goaltender Marcus Hogberg with that shot from just above the goal line earlier this season. According to HockeyViz analytics, that shot in that particular situation had under a 5% probability of becoming a goal.

By contrast, a wrist shot from between the faceoff circles has roughly a 20% chance of going in, and goalies of yesteryear can see exactly where the puck is going now.

“Guys shooting high glove or low blocker is almost an automatic for them,” said Martin Biron, who played 531 games from 1995-2013 . “They come in in the slot, they don’t have time to think, they shoot it, they go high glove. Boom, they shoot it and they go low blocker.”

If goalies know that, why does the puck keep going in? It's a matter of technique. Almost every kid growing up playing the position is taught the butterfly; standing up to make saves just doesn't happen.

"We stood up, so we would get beat low," said Ron Hextall, Pittsburgh’s general manager, who played 701 games from 1986-99. ”They get beat more up top because of the fact that they’re obviously going down."

Until now, that data has only been kept internally team-by-team, though the NHL through a deal with Amazon Web Services plans to unveil shot and save analytics when the playoffs begin this weekend. That information will be able to show each goalie's success — or lack thereof — making stick, blocker, glove or pad saves.

The butterfly style has revolutionized goaltending, with advances in equipment lending a helping hand. Five-hole goals — those that go in between a goalie's legs — are rarer now than in decades past.

“My first maybe 10 years, when (the goalie) doesn’t have their stick on the ice and it was a shot through his legs, the puck was going in,” said Martin Brodeur, the leader in career games played, wins and shutouts and a three-time Stanley Cup champion. "I never thought twice, ‘It’s going to hit something.’ (Now) that stick really doesn’t matter if it’s on the ice or not because the pad just molds to the ice perfectly all the time and it seals up everything."

Of course, not everything is sealed up. Toronto's Auston Matthews surpassed 40 goals in a 56-game season during which 684 different players have scored at least once.

All at the same time goalies like Tampa Bay's Andrei Vasilevskiy, Vegas' Marc-Andre Fleury and the New York Islanders' Semyon Varlamov are putting up save percentages of .925 or higher. As two-time playoff MVP and Hall of Fame goalie Bernie Parent said, “There’s a lot of talent out there.”

Size, too. Jim Rutherford knows he never could have played his 468 games in the ‘70s and ’80s at 5-foot-8. As a GM, Rutherford drafted 6-foot-4 goalie Frederik Andersen, who is just one of many giants in net.

Brian Boucher, now an NBC Sports analyst, was part of that generation of growing goalies at 6-foot-2 when he made his NHL debut in 1999 and understands why the butterfly has become the overwhelming style with so many bigger goalies.

“You cover a lot more ice from your knees when you’re 6-foot-3 than if you are standing up,” said Boucher, who played 371 games before retiring in 2013.

Not a fan of wasting energy, Tom Barrasso once bristled at questions about shots hitting the post behind him and quipped, “What do you want me to do, stop the ones that are going wide, too?” Nah, it's difficult enough for goalies to avoid getting beat by the pucks on net nowadays.

“The game is so much faster, the quality of shot is a lot greater, and the commitment of players defensively is a lot different than when we played, so I think their job is a lot harder than we had,” Brodeur said. “It’s a lot more demanding than it used to be.”