When Vladislav Tretiak met Ron Hextall at the 1987 Canada Cup, the veteran Russian goaltender had a simple question for the NHL newcomer: “Why do you turn your skates?” “I didn’t have a real good answer for him other than the fact that every goalie t
May 13, 2021 5:30 PM By: Canadian Press 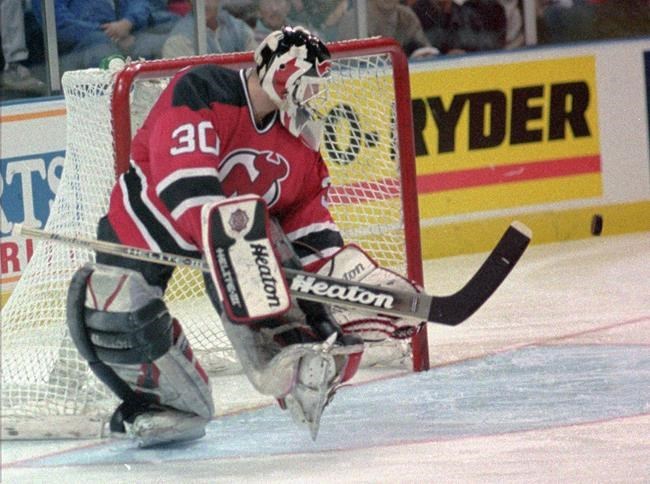 When Vladislav Tretiak met Ron Hextall at the 1987 Canada Cup, the veteran Russian goaltender had a simple question for the NHL newcomer: “Why do you turn your skates?”

“I didn’t have a real good answer for him other than the fact that every goalie that I’ve watched on the way up here turned their skates, so that’s just the way you played goal,” Hextall recalled. “That’s just the way that we learned.”

Tretiak and his countrymen tended goal with less activity in a more compact style, but most standup netminders of yesteryear did whatever kind of acrobatics they felt were necessary to stop the puck. That meant they worried constantly about getting beat by low shots.

“Low and five-hole are probably the two spots,” said Hextall, who earned playoff MVP honors during his 1986-87 rookie year and played through 1999. “We got beat low a lot because we stood up and didn’t spread our legs much and used the old skate save, which kind of seems crazy now."

From standup to butterfly to hybrid, goaltending now is virtually indistinguishable from the fiberglass-mask playing days of Hextall's first goalie coach, Bernie Parent, and Jim Rutherford, who Hextall recently succeeded as Pittsburgh's general manager. Members of the old school understand modern hockey from the net out is a completely different game from when they played.

Parent, who won the Stanley Cup with Philadelphia in 1974 and ‘75, has trouble figuring out how today's goalies stop the puck with so much traffic in front taking their eyes away.

“In the old days, the defensemen were allowed to move the players away,” Parent said. "Today, you can’t touch anybody in front of the net, so it makes it that much more difficult.”

Clearing the front of the net was a necessity for Rutherford, who played more than a decade of pro hockey at 5-foot-8. The shortest goalies in the NHL this season are 3 inches taller than that.

“My size created extra work for me and different ways of doing things: everything from my body size to the equipment we wore,” Rutherford said. "It meant that we had to do a lot of creative things, especially more reflex saves than the game today.”

Fellow 5-foot-8 goalie John Vanbiesbrouck remembers left-handed-shooting players coming down the wing and beating him low on his stick side and between his pads because he didn't want to leave the top open.

“It was hard to protect against low stick, so I would say you could claim that a weakness, but nobody wanted to give in to that fact,” Vanbiesbrouck said. "And I certainly didn’t want to give in to the fact that I was small. While it was a weakness, you had to figure out ways to cover all the areas.”

Of 14 retired goaltenders The Associated Press spoke with about the position, there was a range of opinions about whether current goaltenders are better or worse than when they played. Al Montoya, who only hung up his pads three years ago, said he'd take someone like Rutherford any day over this generation because he knew the old-timers had the guts to make a stop one-on-one.

“We looked better than when the older guys played, Johnny Bower and all those guys, because the position wasn’t refined,” 2000 Vezina Trophy winner Olie Kolzig said. “They just were thrown out and tried to stop the puck with any means possible. Now those guys had probably 100% more courage than we did.”

Hextall, who bridged eras from the high-scoring ‘80s to the clutching and grabbing of the late ’90s, agrees. He thinks today's goaltenders understand the position better, even if they don't need to be as acrobatic.

“We played a more honest game,” he said. "Now, they cover the net where they think that the puck’s going to go, which nine times out of 10 it does. They’re certainly better than they were in my day, for sure.”