Completing his high school education online was now a must and, more importantly, putting food on the table. Along with the practicalities of being responsible for another life, Avr Church also realised what kind of person he wanted to be in the eyes of his son
Jan 18, 2021 2:30 PM By: Capt Leah Pierce 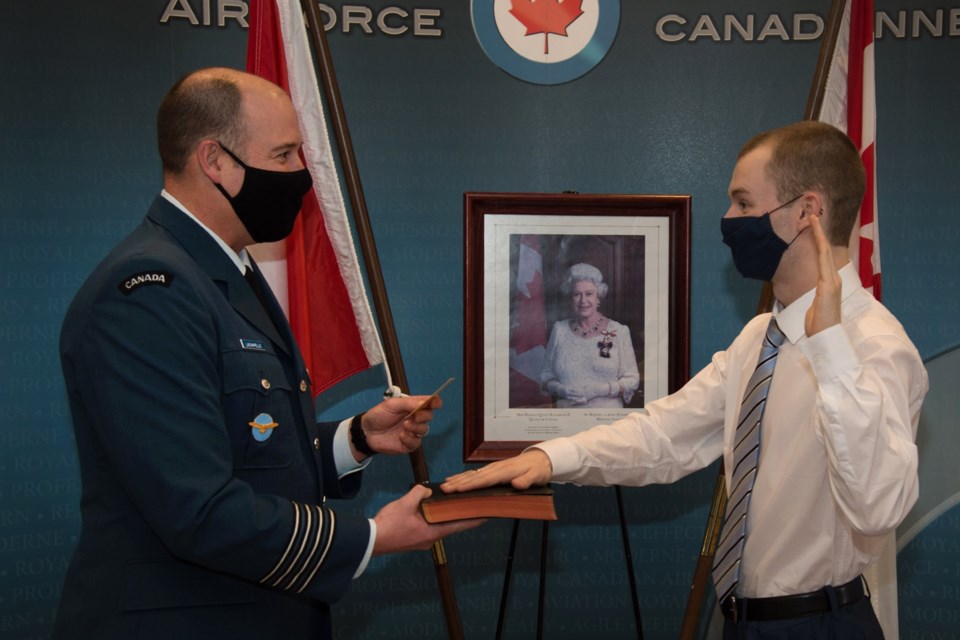 Redefining oneself can come at any time in a person’s life and for any reason.  Fourteen months ago, for Aviator (Avr) Marc Church his inspiration for redefining himself was the birth of his son.

A North Bay and surrounding area native, Church was a typical high school student at Widdifield Secondary School.  Enjoying sports and a teenage social life, he also spent two years at Voyageur Aviation Corp as a co-op student exposed to the avionics industry.

However, once he found out he was to be a father, his focus shifted. Completing his high school education online was now a must and, more importantly, putting food on the table. Along with the practicalities of being responsible for another life, Church also realised what kind of person he wanted to be in the eyes of his son.

“I wanted a career that my son would look up to, to be proud of, and even to follow in my footsteps,” he said.

Then, when he applied to become an RCAF Reservist he learned of a brand new trade, the Air Operations Support Technician or AOS Tech.

Unlike other trades that require extensive training or other trade experience, an AOS Tech is someone who can be trained right off the street in as little as six months.  Training includes a 10-week Basic Military Qualification Course and local AOS Tech training.  The roles and responsibilities of an AOS Tech will vary depending on where the AOS Tech is located across various RCAF Wings in Canada.  At 22 Wing, for instance, the AOS Tech would augment the Wing Auxiliary Security Force.

“I feel it will be a challenge, an adventure, as the first AOS Tech in North Bay.  I will have to think on my feet and come up with my own solutions, an example for future AOS Techs at 22 Wing. During the ceremony, my son, a typical 14-month old was running around the room.  Everyone there, especially Colonel Lachapelle, the 22 Wing Commander, created a family-friendly environment – putting family first.”

For now, Avr Church is just thrilled and honoured to be the first AOS Tech hired at 22 Wing.

As a child, Church wanted to go into policing and even thought of a career in Police Foundations, so when he learned his role as an AOS Tech would be to support the Wing Auxiliary Security Force he looked forward to learning about force protection and contributing to the safety of the people who work at 22 Wing.

Ontario fares no better than 20th as a mining-friendly jurisdiction, according to Fraser Institute
Mar 3, 2021 12:45 PM
Comments