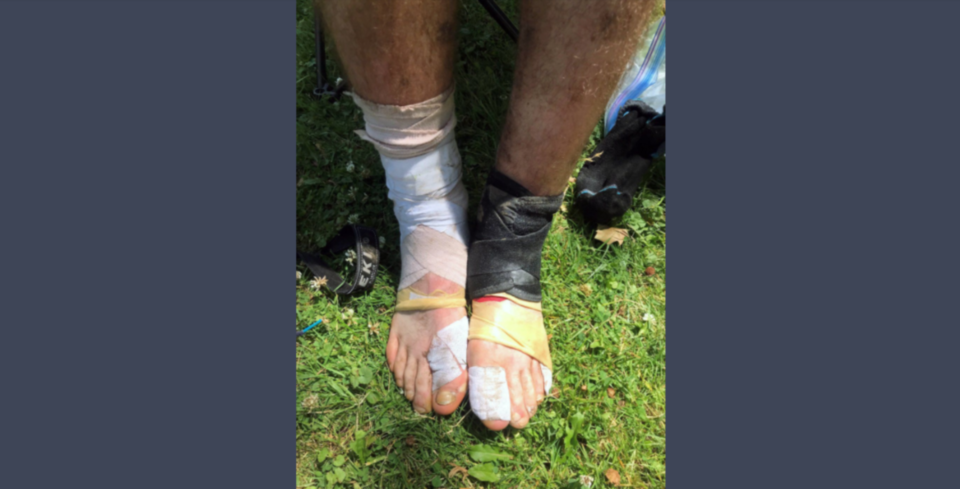 Kip Arlidge touches the rock cairn near Niagara Falls to mark the end of his 890-kilometre trek along the Bruce Trail. He completed the journey in just more than nine days, establishing a new record for the Bruce Trail in ultra marathon running. Michael Styba Photo

It's been a little more than three weeks since Kip Arlidge of Sundridge ran 890 kilometres along the Bruce Trail in just more than nine days.

Since June 27 when he completed the run, the blisters and chafing on his feet have disappeared, his ankles are no longer swollen, he can walk normally again, but he continues to experience a little tenderness in his shins.

Arlidge, 28, a part-time Biotechnology professor at Canadore College in North Bay, is what's known as an ultra marathon runner.

Arlidge says anything over the official marathon distance of 42.2 kilometres is classified as an ultra marathon.

Running a marathon is in itself quite an accomplishment.

Many people probably wish they could do it, but only a handful ever run it.

Now imagine running the equivalent of two-and-a-half marathons each day for nine days.

That's what Arlidge accomplished by starting off from Tobermory at the north end of the Bruce Trail Friday, June 18, and arriving at the southern end of the trail in Niagara Falls Sunday, June 27.

He completed the gruelling trek in nine days, three hours and 27 minutes.

Arlidge has run competitively for about 10 years and turned to ultra marathon running about six years ago when he graduated from Queen's University in Kingston.

The attraction was that ultra marathons usually involve trails.

“I'd rather spend eight to 10 hours running in a forest than four hours doing a marathon on a hot day throughout,” he said.

Until he decided to take on the Bruce Trail, Arlidge had never run in an ultra marathon spanning more than one day.

Arlidge had been toying with the idea of taking on the Bruce Trail for the last couple of years, even before Pockler set the previous record last fall.

As for why take on the Bruce Trail, Arlidge says it was to “find (his) limits in terms of energy output over a period of time and experiment with sleep deprivation.”

In January, Arlidge said he had made up his mind to run the Bruce Trail.

A goal from the outset was to break Pockler's record.

Arlidge's only familiarity with the Bruce Trail was about a 10-kilometre section of the route when he went camping there with his wife, Megan, a couple of years ago.

“I had a rough idea of what it would be like, but essentially I went into it blind,” Arlidge said.

His training consisted of heading into Algonquin Park and running for five to six hours a day, similar to how he would prepare for a one-day ultra marathon race.

“But I also dialed back the training a little earlier so I would go on the Bruce Trail uninjured,” he said.

When the big day arrived, Arlidge started the run with his support team and a van.

Calling the event a 'run' is a misnomer because Arlidge says when ultra marathoners take on the Bruce Trail, it's a combination of running and hiking the trail.

In the early stages of the trip, Arlidge ran the easier parts of the trail and hiked the more rugged terrain with the goal of getting in 100 kilometres a day with five hours of sleep at night.

That worked in the beginning but as the trip progressed, Arlidge was doing more hiking than running and that came at a cost.

“I wanted to cover about 100 kilometres a day and that's easy to do if you're able to run lots,” he said.

“But if you're hiking more, then you need more time to cover that many kilometres and the only way I was able to accomplish that was to reduce my sleep.”

The result was that by the middle of the run, Arlidge was down to three hours of sleep over 24 hours. In the last few days his sleep was further reduced to 90 to 120 minutes and spread over short bursts.

Arlidge says falling asleep wasn't an issue because he was pretty tired “but staying asleep was a bit of a problem.

“That's because I was in a lot of pain and would wake up in pain,” he said.

“And on the last day or two, I had trouble staying awake.  I'd be running or hiking and would become uncontrollably tired.”

That's when he would stop, lie down on the road or trail for about 10 minutes and a member of the support team would then wake him up and he was good for another two to three hours.

Arlidge is candid about how exhausting and tough the trek was, and that led to thoughts of abandoning the attempt.

“There were definitely moments when I didn't want to finish and I was ready to drop out,” he said.

“But that was actually more in the early stages of the trip.  Toward the end it became psychologically easier (to finish) because I'd sunk so much time and effort into it.  After you've already been on your feet for seven days, two more days didn't seem as bad.”

What also made the trip more manageable was “staying in the moment,” as Arlidge puts it.

He would break down his running and hiking periods into sections of 10 to 15 kilometres, which is when he would next meet up with the van and his support team.

“Breaking it down into these smaller segments was a little less overwhelming,” he said.

“I could focus on one section at a time and staying focused on the next eight kilometres instead of the next 800 kilometres made it more manageable.  So I would just grind through to the next meet up spot.”

Arlidge said he used ski poles for about 80 per cent of the trip and said they “were incredibly useful.

“I'd never done much hiking or running with poles before this,” he said.

“This was uncharted territory for me but they were worth their weight in gold.  On the downhills they allowed me to take some of the pounding off my knees and ankles and they also helped with my balance.  I didn't fall at all during the nine days.”

Arlidge added this was significant because given the amount of fatigue he was experiencing, falling would have been easy without the poles.

When Day 9 arrived, Arlidge was suffering extensively with pain in his legs and feet and was experiencing sleep deprivation.

But with about 60 kilometres to go, he knew he would be under the record and his support team had grown a little by then.

Both ends of the Bruce Trail are marked by rock cairns, several rocks cemented together standing about eight feet tall with plaques.

“I finished by touching the rock cairn and when I did that there was such a sense of overwhelming relief and I was happy to be finished,” Arlidge said.

“I was just happy not to have to run anymore.  There was a sense of accomplishment but it took a few days to sink in.”

Shortly afterward, Arlidge and his wife made the drive back to Sundridge with Megan Arlidge behind the wheel.

As tired as he was, he didn't sleep during the ride home and went to bed at a regular time that evening, although Arlidge says the “quality of the sleep was terrible.

“For the first several days I could only sleep in short chunks like two to four hours,” he said.

“Then I'd get up in a complete panic thinking I had to start running or hiking again. That was an unusual and a weird side-effect of the run.”

When he attempted the run, he thought he could run it a little faster than his final time but was happy with his result.

Given the right conditions and a bit of luck, he believes another athlete could cut three to five hours off his record time.

And he hopes that happens.

“I'm definitely going to be supportive of anyone who reaches out to me,” he said.

“I will give them my GPS files and all the things I learned along the way and would be excited to see someone else do it better.”

Arlidge said he would be honoured if he could act as a pace runner for the next person who attempts the Bruce Trail, just as members of his support team ran with him along different portions of the trail to help navigate so he could stay solely focused on the running or hiking aspects.

The only condition Arlidge has is his next running gig can't happen for a little while.

He's taking some time off from running so his body can recover.

But at some point, when someone announces they would like to be the next person to attempt the 890 kilometres of the Bruce Trail with an eye to Arlidge's record, Arlidge said “yeah, I'm looking forward to helping someone break the record.”