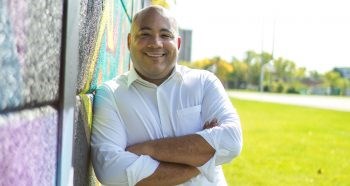 In a news release, Coteau said “We know that Conservatives may claim to be ‘for the people’ but their cuts hurt children and families. I've been on the campaign trail with federal Liberal candidates since the writ dropped, and also working hard to build support in the upcoming Ontario Liberal leadership race, by reaching out to people from all walks of life who know we can do better than the failed approach of Doug Ford.

"I am running to ensure Ontario is the best place in the world to raise a family, where children are the healthiest, safest, best educated, and where we ensure everyone--regardless of region or life circumstances--has a fair shot at success," said Coteau.

Coteau immigrated to Canada as a child and grew up in Flemingdon Park, a working-class neighbourhood in North York.

New exhibit opening at the Canadian Forces Museum of Aerospace Defence
Jan 22, 2020 9:59 AM
Comments
We welcome your feedback and encourage you to share your thoughts on this story. We ask that you be respectful of others and their points of view, refrain from personal attacks and stay on topic. To learn about our commenting policies and how we moderate, please read our Community Guidelines.