This isn't the first music festival cancelled this year due to teachers' job action. A French-language student music festival for Ontario high schoolers — Quand ça nous chante — was cancelled for similar reasons as NOMF. That festival was supposed to take place in North Bay this month.
Feb 13, 2020 10:30 AM By: Heidi Ulrichsen 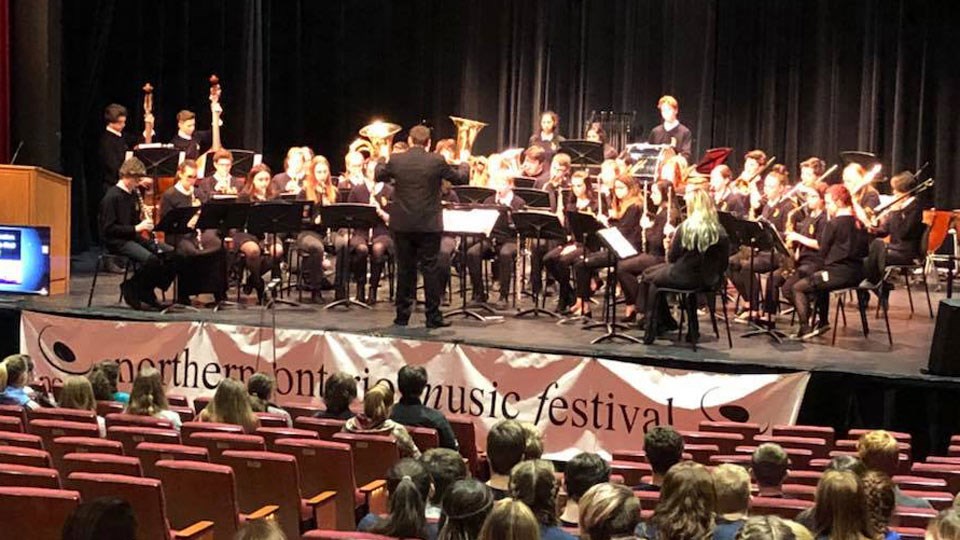 A band is seen here taking part in the Northern Ontario Music Festival in 2018. (Supplied)

A music festival popular with school bands has been cancelled due to the ongoing labour dispute between the province and teachers' unions.

Carolyn Otto, director of the Northern Ontario Music Festival (NOMF), said the committee that organizes the festival is made up of teachers, retired teachers and community members.

With teachers on the committee already engaged in job action including work-to-rule and rotating strikes, and with uncertainty about how job action may ramp up, the decision was made last month to cancel the festival.

“We just thought that rather than just leave everybody hanging … we'd pull the plug at a time when (bands) could set other goals for now, and then come back fresh to it next year,” Otto said.

You can read the full letter from Otto about the festival's cancellation on its website.

NOMF, which has been running for more than 40 years, and typically takes place in Sudbury yearly at the beginning of March, attracts bands from as far away as Timmins and Barrie.

While many school bands take part in the festival, there's also participation from community bands. Participants are graded on their music performance, and an adjudicator holds a workshop with each band.

Otto, who was an instrumental music teacher for 30 years — most of them at Sudbury Secondary School — and retired in 2016, said she realizes students are disappointed about the cancellation.

“Well yes, of course they are,” she said. “And of course, it was a tough decision for those members of the committee who are teachers, too. They didn't want to make the decision either.”

Otto, who has been involved in the festival since the 1980s, said she can only think of one other year where NOMF was cancelled, but can't remember why it was cancelled in that case.

NOMF is also a qualifier for MusicFest Canada, a similar festival to NOMF, but at the national level. This year's event takes place in Calgary, Alta.

Otto said if local bands still wish to take place in MusicFest Canada, they can submit a taped performance for review by adjudicators.

This isn't the first music festival cancelled this year due to teachers' job action. A French-language student music festival for Ontario high schoolers — Quand ça nous chante — was cancelled for similar reasons as NOMF. That festival was supposed to take place in North Bay this month.

Sudbury.com reached out to local school boards to ask about the impact teacher job action is having on student activities and extracurriculars.

The Rainbow District School Board responded with the following written statement:

Extra-curricular activities continue in our secondary schools. At the elementary level, we remain focused on maintaining as many opportunities as possible for students. We recognize, however, that some activities may need to be postponed if a volunteer, such as a community coach, is not available. Any decision to postpone is made on a case by case basis after considering all options.