Armstrong is known around the building as the person who carries out small fix-up jobs, such as putting a slider on dresser drawers or repairing chairs
Jun 16, 2021 3:30 PM By: Rocco Frangione 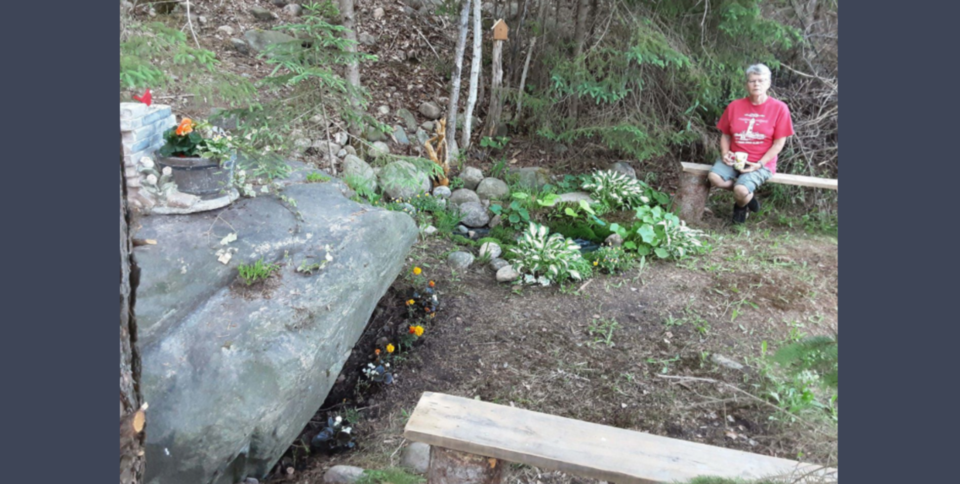 Judy Armstrong relaxing on one of the two benches she made at the rear of the seniors' building where she lives, alongside the small flower garden she created. Armstrong is the Burk's Falls Local Champion for the month of May, a program where the village honours its residents for their volunteer work.Gladys Middlebrook photo

Burk's Falls has named its Local Champion for the month of May.

Judy Armstrong, a resident of Fell Homes Inc. for seniors, was nominated for the monthly award by her friend, Gladys Middlebrook, who also lives in the seniors' building.

“She's a very generous person with her time and help,” Middlebrook said.

“If something needs repairing, Judy's the go-to girl.”

The statement isn't an exaggeration.

Armstrong is known around the building as the person who carries out small fix-up jobs, such as putting a slider on dresser drawers or repairing chairs.

And it's all because she loves woodworking, Armstrong told The Nugget.

However, the small repairs only scratch the surface of Armstrong's talents.

“I mostly give them away because I like to see smiles on people's faces. They all think it's super and can't believe I can do so many different things.”

In the three years, she has lived at the building, the healthy 71-year-old has made six lawn chairs.

Woodworking is one hobby.

Armstrong said she has another hobby that people around the building have only begun learning about.

“I also do cardmaking, like birthday cards,” she said.

“As word got out, people came to see me about making birthday cards.”

Armstrong makes the cards from a punch and stamp set and applies various images to them.

She recently made a barn with horses. The barn doors, along with a door at the top, can open, and Armstrong added some cheesecloth to simulate hay.

She threw in some chickens for added measure.

Although Middlebrook has known Armstrong for many years, the friendship has grown stronger after she moved into the seniors' building last October.

Middlebrook says Armstrong doesn't hesitate to help. On one occasion, she helped Middlebrook bring up a cabinet to her apartment that was stored in the basement.

The tenants have lockers in the basement and Middlebrook says on another occasion, Armstrong made wooden numbers for them.

In the winter, Armstrong is seen cleaning snow off the cars at the building, including Middlebrook's vehicle.

Middlebrook is 80 and Armstrong says removing the snow off vehicles is a courtesy she extends to those neighbours who need the help.

A larger project Armstrong took on more recently involved beautifying the exterior of the seniors' building out back with flowers and a couple of benches.

A neighbour helped with the flowers but Armstrong made the rustic benches and now, the residents have a place to sit outdoors in a garden area.

Most times, Armstrong will use her own money to buy the wood for her various wood-related projects and she doesn't look for or ask to be compensated.

In fact, she doesn't like to accept any payment.

But Armstrong says there are times when people insist she accepts something in return for her projects.

That was the case when one neighbour asked her to make three flower pots, one for her and two for her daughters.

Armstrong said being nominated as Local Champion came as a surprise.

“I'm sure there are a lot of people out there who do a lot more than I do,” she said.

Each month, the village awards a Local Champion with a $100 gift bag filled with goods from local businesses.

The promotion runs until the end of the year.

If you would like to nominate someone go here to fill out the online form.