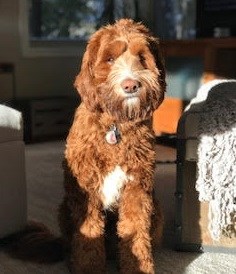 This Goldendoodle names Cooper is missing.

Rob Bourre emailed BayToday this morning, "Cooper was just found on Trout Lake!  Thank you for all your help."

The dog was found around 8:30 this morning on day four of the search.

A Goldendoodle dog named Cooper is still missing in the West Ferris area of town. He's a medium size dog around 40lbs.

Owner Rob Bourre writes, "Our dog Cooper has been lost since Tuesday night. Was originally in the Seymour St. area but was seen yesterday afternoon around Marshall Ave.and ONR shops

"He is a one-year-old reddish brown Goldendoodle with a white tipped tail and a white underbelly. He will also be dragging a leash. His name is Cooper and he's scared of people so don’t chase him."

The dog escaped while at a veterinarian on Seymour.St. Bourre says he was let out for a pee and took off.

Bourre says he's also posted all over Facebook and Busters and a drone is now being used in the search.

The Goldendoodle is a hybrid dog breed resulting from breeding a Poodle with a Golden Retriever.