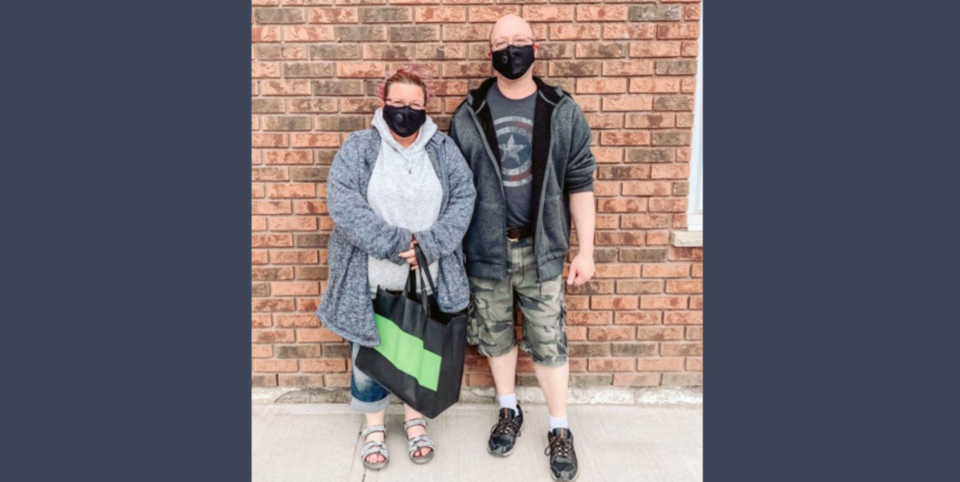 Diana and Jason Warriner dropped by the Burk's Falls town office to pick up their award for being named Local Champions for the month of March. From March to December, the community is recognizing the work of volunteers with gift bags containing $100 worth of goods from local merchants.Lacey Stevens Photo

Burk's Falls has honoured its first recipients of a program to recognize the efforts of local and township residents in Armour and Ryerson who go above and beyond to make the community a better place to live.

The March winners of the Local Champion award are Diana and Jason Warriner.

As winners, the husband and wife receive a $100 gift bag of goods from local merchants.

The Warriners were nominated by Doug Hammell, Diana's father, who said the couple do a tremendous amount of community fundraising and volunteering.

Several years ago, Diana Warriner coordinated with Coun. Lisa Morrison to create a new playground for children, complete with equipment.

“I was involved with the initial planning and talked to the supplier,” Warriner said.

The playground has been in place for a few years now and the drive took two years and in the process raised tens of thousands of dollars through a combination of selling tickets, holding dances, and auctions.

This Easter the Warriners held a colouring contest for children to brighten their days since COVID-19 has limited many activities.

The Warriners bought some soccer balls, footballs, and bubble wands using their own money for prizes.

Warriner also did a shout-out to her real estate friend Leann Russell as well as Kathy Andrews, who bought three bicycles to be awarded as the grand prizes in the colouring contest.

“One was a trainer bike, the other was an intermediate for five- to seven-year-olds and the third was an 18-speed bike for the older kids,” Warriner said.

She adds both Russell and Andrews bought the grand prizes out of their own pockets and were not reimbursed in any way.

The contest involved children colouring an Easter egg on an 8 by 11 piece of paper which families could either download or pick up at the town hall.

About 40 entries came in for the contest.

Another significant event the Warriners are organizers for is the annual Halloween Haunt in conjunction with the local Lions Club.

The event was cancelled last year because of COVID-19, but involves setting up the fire department's 40 x 20 tent at the arena, which is decked out with Halloween-related props provided by the Warriners for children.

“A lot of people also donate candies,” she said.

The Warriners learned they were named Local Champions through a phone call from Lacey Stevens, the recreation coordinator for Burk’s Falls.

“To be honest when I got a call from the town office, my first thought was 'I was pretty sure we paid our property taxes,'” Warriner said.

“So why would the town be calling?”

Warriner said the news shocked her and then she surprised and shocked her husband with the Local Champion award news.

“We don't do what we do to be recognized,” she said.

“It's just what we do. We don't seek the limelight. We like to do things behind the scenes. It's what many people around here do. There are so many volunteers in this area who don't get recognized for a lot of the hard work they've done.”

Stevens told the Warriners it was Hammell who nominated them.

Hammell lives in Parry Sound and learned about the promotion purely by luck.

Hammell says he and his partner were discussing where a particular place was in Burk's Falls and he went on the municipal website to determine the location.

“Lo and behold, for some strange reason I clicked a selection and up came the Local Champion information,” Hammell said.

It's not what he was looking for, but after reading the details of the promotion Hammell said “I thought Jason and Diana do an awful lot and they're certainly my heroes.”

“I filled out the form and was pleasantly surprised to hear that they were selected,” Hammell said.

Hammell believes his daughter got her drive to do community work from his parents.

“Diana's mother and I broke up very early in our relationship after the children were born,” Hammell said.

“When I would get the children we'd go to my mother's and father's home in McKellar. I think that's where Diana picked up her enthusiasm and drive. She definitely has her grandmother's genes in her.”

Hammell says his mom did a lot of community work and during the 1960s decided to also run for the local council.

She was elected as a councillor and years later became the first female reeve of McKellar.

“And back then it used to be an old boy's club,” Hammell said, highlighting that what his mother had achieved in that kind of environment was fairly significant.

Hammell says he's proud of the volunteerism his daughter has done over the years and includes Jason in that statement.

“I wouldn't have nominated them if I thought differently,” he said.

The Local Champion award names a recipient each month until the end of the year.

Go here for details on how to nominate someone.

Diana Warriner says what Burk's Falls is doing to recognize the work of volunteers is “phenomenal” and it's her intention to also nominate deserving people for the same award in the upcoming months.