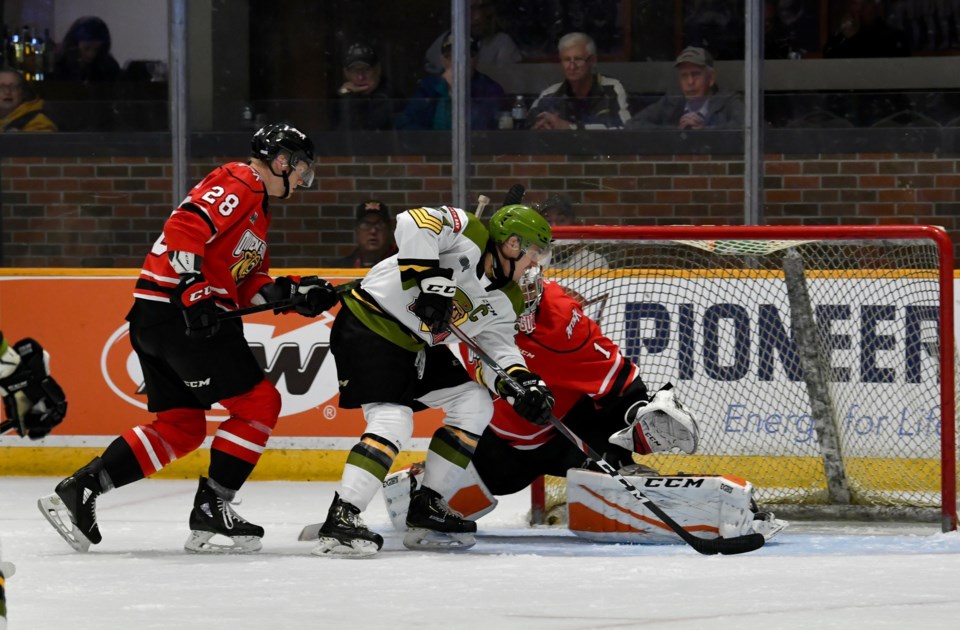 Brad Chenier, who sported the "C" against the Attack in their only pre-season home game. Photo by Tom Martineau/BayToday.

There will be a lot of youth in the North Bay Battalion lineup this season.

But  Adam Dennis,  assistant coach and assistant general manager with the Battalion, says for the Troops to be successful with so much youth, work ethic will be key.

“We have to be a hardworking team. We can’t be a team that takes nights off, or takes shifts off,” he said of the squad which will sport nine rookies including two rookie goalies.

“We’re going to have a young defence and young goaltending, so there are going to be mistakes made early on. We just have to make sure we stay positive, correct them and make sure there are improvements along the way.”

The 2019-20 version of the Battalion which went 0-5 in pre-season will start the real season on Friday night when they host the Barrie Colts at Memorial Gardens.

Matthew Struthers is the top-scoring returning forward but he is not expected to be in the lineup on opening night.  The invite to the Montreal Canadiens rookie camp has been nursing an upper-body injury. The team will be counting on him to build on his 80-point campaign from last season.

“We expect him back fully healthy shortly,” Dennis said of Struthers.

Despite the injury setback, Struthers is encouraged by the look of this young group.

“I think everybody has aspirations and goals, which is key when you’re making a team. It’s very competitive. The practices have been good, so I’m excited for the season to start Friday.”

“I know that they were very happy with him,” said Dennis, whose cousin is an assistant coach with the Golden Knights AHL affiliate team in Chicago.

“He was one of Mason’s coaches throughout training camp and I got a lot of positive feedback. He had a scrap there like we all know Mason likes to do. I think one of the biggest things with Mason is he is a student of the game. He is always looking for ways to get better and he is a consummate professional.”