With Leafs camp behind him, Brazeau looking to make waves with Marlies

'Getting that invite was a big confidence booster and it just shows the work I have been putting in'
Jan 14, 2021 1:00 PM By: Kortney Kenney 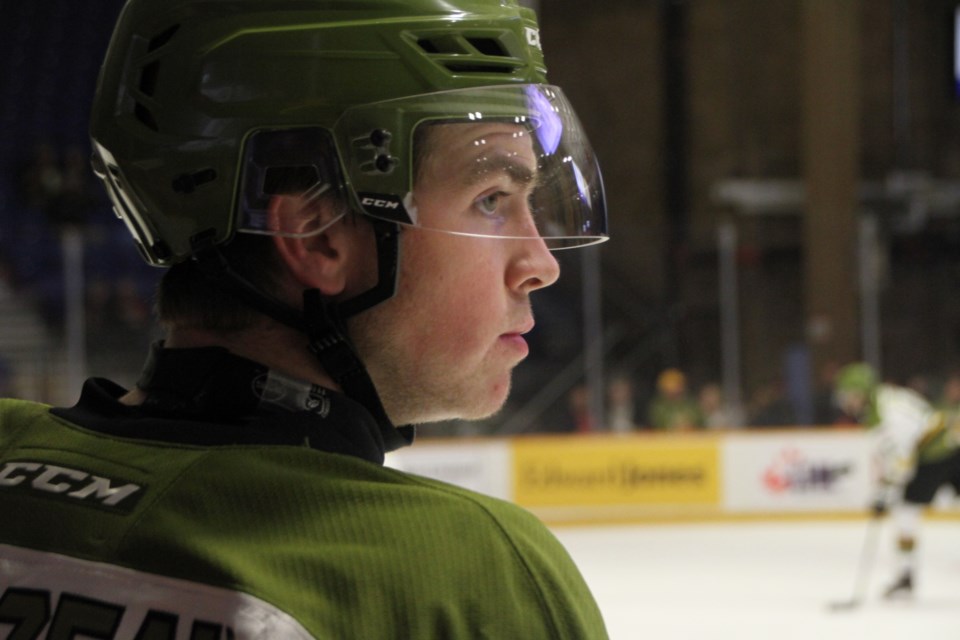 Humans are creatures of habit.

It has been proven on multiple scientific levels that are beyond this humble reporter’s pay grade, and it especially rings true when it comes to hockey players. As for former North Bay Battalion captain, star, insert superlative here, Justin Brazeau, the opportunity to compete at the Toronto Maple Leafs camp helped re-establish previous routines…even if he has been on the ice a lot during the fall.

“Being in it is nice,” Brazeau said.

“Being able to be on the ice, to be honest it’s getting, not old, but you’re itching to get back and playing. I have been here for three- or four-months kind of doing the same thing. That was the biggest thing for camp, it was nice to get back into a routine. You’re showing up, practicing, and you’re competing, working towards a game and having a game-day feel.

“It’s been huge to be able to train and skate consistently through this whole time,” he added. “I think I speak for a lot of the guys here that we’re ready to get back at it.”

Even with the routine, however, there were still some new things to get used to.

“It was different from years past with camp, especially with making sure when we were in the dressing room and stuff that we were in smaller groups and masks,” Brazeau stated.

“We get tested every day for COVID. As soon as you go in, the first thing you do is take your temperature and get your test done.

“I think the biggest thing was during a normal camp, you can have as many guys in the gym as you want, stretching, and going through prep, but they were limiting numbers,” he continued.

“If you were just rolling out there were like ‘ok, grab your roller and go there, if you’re doing this, go here,’ just trying to not have everybody in the same room at the same time.”

According to Brazeau, masks weren’t mandatory in the dressing room, but a lot of the players opted to wear them.

“The big thing from Kyle (Dubas) and the coaches is if you get it, it affects not just you, but the guys you sit next to in the stall,” Brazeau explained. “A lot of the guys took the initiative to wear them in the room and help everybody out.”

As for his own performance at camp, Brazeau is happy with what he left on the ice.

“I thought personally that I had a pretty good camp and had a lot of fun,” he assessed. “It was nice going into a camp knowing a lot of the guys from being here and training all summer with them. I would say the last month, month and a half before camp started, most of the guys were here and skating already. Being a little more comfortable around them was new for me, and definitely nice.”

And on the game side, he saw some action in the Leafs “Blue and White” game.

“It was weird because it really felt like a game,” said Brazeau. “For those guys, it was basically their preseason and they took it very seriously the whole day. We had a morning skate, go home, take your nap. It was nice because I hadn’t played a game in 10-11 months now and it was cool to get back into that.

“I thought I played pretty well and had a couple of chances here and there,” he added.

Back on the routine topic, Brazeau says it was interesting to see if he could ramp up for game action after the longest layover of his career.

“I went down for a pregame nap and I was like ‘woah, I haven’t done this in awhile,’” he said. “I couldn’t even sleep really because the routine was off from what I was used to. I think once we got to the rink, you get to your prep and it felt very game like.

“It was weird having no fans and the fake crowd noises makes it seem a little weird, but it was easier to get in to than I thought it would be,” continued Justin.

In this “new normal” crowd noises have been pumped into buildings during games where fans can’t attend, and as “Braz” had previously mentioned, it’s weird to get used to.

“I think for me the biggest thing is during play it’s pretty quiet no matter what, even if you are in a loud rink,” he explained. “With a fake crowd it throws you off because during play you wouldn’t normally hear anything. In between whistles it’s weird because you hear music and no crowd. You go in the corner and you pin a guy and they put in a fake cheer which is weird because you don’t hear that in a normal game.”

While putting in the work during the offseason in Toronto, Brazeau says he learned a lot from some current Maple Leafs.

“Those guys, you can learn something off them everyday,” he stated. “Just seeing the way they play, the little things they do, like (Jason) Spezza, everyone says his skating is slower but if you watch him closely, he still makes so many little plays. You don’t have to be the fastest on the ice to make the plays he does. You take little bits from everybody to add to your game.”

On top of Spezza, Brazeau said his other favourite to watch was Zach Hyman.

“He’s not the biggest, or the fastest, but he seems to always be the first on pucks,” Brazeau said. “He wins every battle, the way he puts his body and it’s almost like it’s easy for him.”

In scrimmages during camp, the former captain of the Troops was thrown into the fire by facing off against the Thornton, Matthews, Marner line.

“I have no idea how or why, but I swear we did three scrimmages in a row and I was up against them every single shift that I had for three straight days and I don’t think I touched the puck more than twice,” Brazeau said with a bit of a laugh.

“They’re so dominant out there. Thornton’s getting older but he’s so smart, and the other guys are so smart. They have a lot of fun and even in scrimmages they are scoring and celebrating.”

With COVID-19 restrictions in place, the camp roster wasn’t as big as it would normally be. For Brazeau, who is in year two of an AHL contract, it wasn’t always guaranteed that he would make the grade.

“It’s a great feeling,” he said. “To be honest with you, when they released how many people were going to be in camp at the beginning of December, I wasn’t sure what was going to happen as far on if I was going to be going.

Since getting sent to the Toronto Marlies side of camp, it’s almost back to the waiting game now for the former New Liskeard Cub.

“Most of the guys that got sent down, we’re all still here going into the rink kind of when the Leafs are here,” he explained. “We do a workout in the morning and then on the ice for a half an hour, hour long practice and then we do a three-on-three scrimmage and then a conditioning skate.”

On the decision to be sent down to the AHL camp, the former captain says it wasn’t a huge shock.

“We had meetings with Dubas and for me, it wasn’t a surprise that I didn’t make the Toronto Maple Leafs this year, it wasn’t necessarily my goal going to camp,” Brazeau assessed. “He said to keep working and that they have seen the improvement in me the last two years.”

“I was with the Growlers last year and he said they thought I had a good year and to get adjusted to the AHL this year and go from there,” he continued.

Yet, the Marlies present a big opportunity for the 2018-19 OHL goal scoring leader.

“Right now, there are only eight forwards here, but I’m not sure how many more are coming,” Brazeau said. “They’re going to sign some guys once the season gets approved, but as far as my mindset remains the same.”

“I want to show up to camp, have a good camp and work my way up from there,” the former captain continued. “I’ve always been like that, even from my first year in North Bay. Nothing’s given to you, you have to earn everything you get.”