Will sex help sell the Ring of fire? 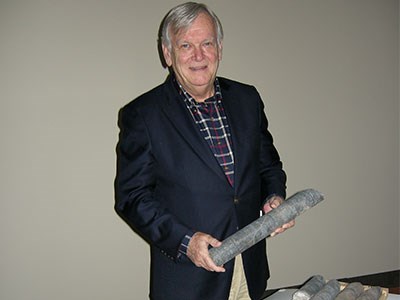 KWG Resources president Frank Smeenk is “tickled” at the reaction to the social media sensation coming from a saucy promotional video on his company and the Ring of Fire.

“I guess I’m kind of tickled. It proves the old adage there’s no bad news, especially if you’re a junior mining company looking for a means of educating the public on the value proposition.”

Whether viewers were absorbing the ‘5 Interesting Ring of Fire Facts’ is matter of ongoing web debate judging by the uproar from critics who view the video, and its use of kitschy sexual innuendo, as an objectification of women

The video features two models, Theresa Longo and Ashley Nicole, both former Sunshine Girls, promoting the mineral and economic potential of the Far North deposits while lounging at a lakeside cottage.

Longo, an aspiring actress and fashion model, is a KWG shareholder and the company’s new strategic marketing consultant and ‘brand ambassador.’

The video is one of a series of ‘Mining Minute’ episodes posted on the chromite junior miner’s website and on YouTube last March, soon after Longo was hired by the company.

Earlier episodes feature Smeenk and Longo in an office setting discussing various aspects of the Far North exploration camp and the company’s work there.

But Episode 23, released Aug. 3, signalled a definite departure from the more buttoned-down tone to one that more mirrors Longo’s online portfolio of modelling work.

The video has created such an online stir that The Sun newspaper in the United Kingdom headlined the “strange but saucy promo” of the blonde model “wiggling her bum while talking about chromite.”

“I guess, philosophically, there are a few people that aren’t as liberated as most,” said Smeenk, a 30-year mining developer, of his critics.

“I’m sorry they feel that way. I’m more sorry for some of the rancorous stuff that Theresa has had to read about herself. Christ, this is 2016. It’s not as though I wrote the script and specified the wardrobe, far from it.

“The story was about the Ring of Fire, which we have an interest in, so it’s really a tangential connection. It’s not a view I have of women.”

Smeenk said the purpose of the company-sponsored ‘Mining Minute’ was to get their story into social media. Longo was selected to be their branding guru to expose them to a new investor audience.

“The markets have changed dramatically. The brokerage industry by and large no longer exists, their clients are gone. So the participants in the market for risk capital are hard to find.”

He describes Longo as being well-educated on the industry based on her years attending the Prospectors and Developers Association of Canada (PDAC) annual show in Toronto and having done promotional work for another mining company.

“We hired Theresa at PDAC where we met her two years previous to be the hostess of an event we put on in our office. And that led to the conversation of how do we get to social media and that’s when I learned she had 70,000 (Twitter) followers.”

Smeenk has given her carte blanche to shape the company’s web messaging.

“She said to me you guys build all these expensive websites but nobody reads them anymore. So you’re wasting your time and money. She said, everybody in my generation digests (information) in 30, 60, 90-second video clips.

“I said, what do you think about a Mining Minute? She said, “That would be good. I want to know a lot more about what you guys do on Bay Street, in mining, and how it all works. I’ll do the research and ask you the questions and I’ll find out what people want to know.’

“That’s where it’s come from. I can’t help the fact that she’s good-looking.”

Smeenk said he was somewhat aware of the episode’s content prior to posting, but has no misgivings about it.

“She asked me if I was okay with it and I didn’t see any harm in it so I said, ‘Let’s put it up and leave it up and see what happens.’ A lot has happened. I hope it’s good for her career. I think it probably will be but it has brought attention to our company and the Ring of Fire.”

Smeenk, who said he’s received no requests to remove the video, views it as an opportunity for both parties to benefit.

“It got so much attention. I thought maybe this is a mechanism where our business can do something for her business. There all kinds of these hard-working, poorly paid young people trying to make a living and a career. I’m wondering if we can’t find a whole bunch more of them to start getting them educated on other companies, including ours.”

In mining circles, KWG is no stranger to courting controversy, but of a different manner.

The Toronto-based junior miner holds a 30 per cent share in the Big Daddy chromite deposit in the James Bay lowlands and the rich mineral exploration region known as the Ring of Fire.

In 2010, KWG took a novel approach to gain access to the remote area by using mining claims to stake a future 340-kilometre rail corridor. But the legality of doing so prompted a series of legal actions involving Cliffs Natural Resources, and indirectly the province, which resulted in an Ontario appeals court deciding KWG no longer had exclusive surface rights to the corridor.

Undaunted, the company is now courting Chinese interests - specifically China Railways First Survey and Design Institute – to use as conduit toward eventually accessing offshore financing to build the railroad.

Adding a bit of sex appeal to their promotional work was having the desired effect.

Though KWG stock was hovering in the two-cent range in mid-August, Smeenk said the volume of shares moving was “three or four times what we did the previous days.”

Moreover, he harbours no worries that it will harm his 30-year industry reputation or that of the company.

“I can’t imagine. Quite the opposite from what I’ve experienced so far in the last few days. Lot of guys are saying, ‘I wish I’d thought of that.’”

Pickleball gaining more momentum during pandemic
Jul 16, 2020 10:00 AM
Comments
We welcome your feedback and encourage you to share your thoughts. We ask that you be respectful of others and their points of view, refrain from personal attacks and stay on topic. To learn about our commenting policies and how we moderate, please read our Community Guidelines.