'We are respecting the fact that once a Wildcat always a Wildcat, we bleed red and blue and we will always be wildcats in our hearts'
Dec 13, 2019 5:00 PM By: Chris Dawson 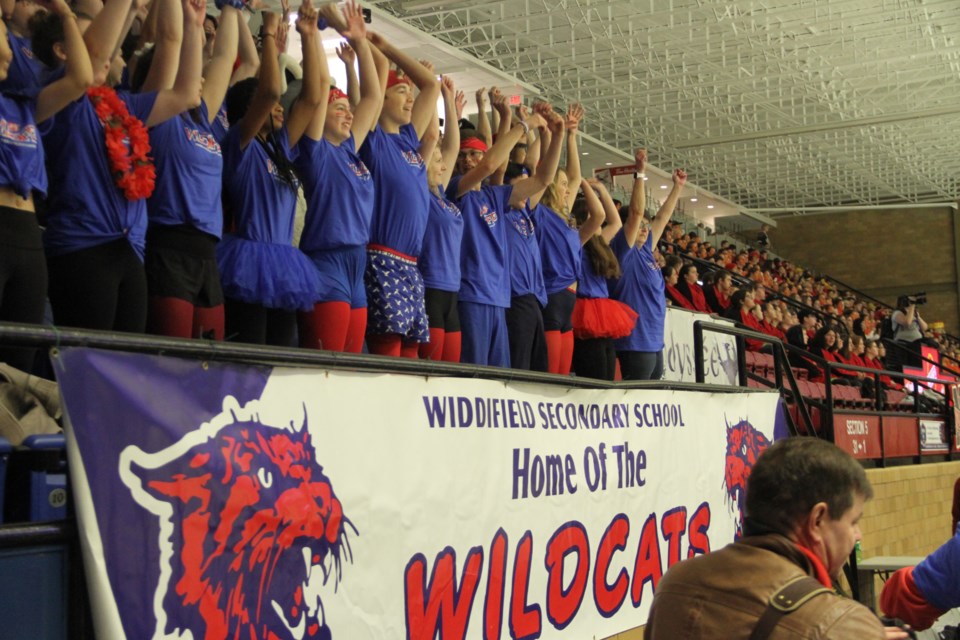 The Widdifield Wildcats perform a cheer one last time. Photo by Chris Dawson/BayToday.

The East-West Game is one of the most unique sporting events in the city.

The long-time event allows schools to show off their school pride with elaborate, colourful spirit dances in the stands while the athletes get to show their stuff in front of a crowd louder than some NHL games.

While it's a proud day filled with school spirit, the students sporting Widdifield Wildcats red and blue may appreciate this day the most.

That's because this will be the last East-West Game for Widdifield as the school will close its doors for good this spring.

"We are respecting the fact that once a Wildcat always a Wildcat, we bleed red and blue and we will always be wildcats in our hearts," said Gravelle.

"We all mostly cry at the end of it so it will be a good one and one to remember for the rest of our lives."

"The emotions going into this event are very high, and we are going in proud, we want to go out strong as wildcats," he said.

"We are emotional not to be returning the next East-West but we are excited to be here today and leave our mark in the arena."

Gage King and Kyle Armstrong are excited too. Their parents went to Widdifield and they will be playing on the ice for the Wildcats.

"It will be a special period, just because it's the last East-West for Widdfiield, there are a lot of lasts this year for Widdifield, there aren't any firsts, all lasts so it is tough but we just have to play hard and do it for our school," said Armstrong.

"I have been a Wildcat since grade 9 and my dad and mom were Wildcats so to wear the 'W' and to represent the 'W', it means the world."

"My Dad, he played hockey here and he had fun. He did everything he wanted to do as a Wildcat and I want to make him proud also," he said.

Andrea Lefebvre is a Chippewa S.S. teacher and one of the East-West organizers.  She says the passion Widdifield is showing is what East-West is all about.

"East-West is such a valuable spirited event for North Bay," said Lefebvre who also went to Widdifield.

"It brings together all of the school boards under one roof and it allows the high school students to have fun together and that is really important."

However, despite the finality of the day for Widdifield, the school did not win a Spirit Award on this day and also fell 1-0 to Algonquin in the sixth and final period of East-West 2019.

Despite that Wildcat disappointment, Lefebvre is hoping West Ferris and Chippewa embrace that Widdifield Spirit during the next East-West game in 2021