Why victims of minor motor vehicle collisions may not be 'okay'

First responders will give concussion information cards to victims who have refused medical treatment
Mar 8, 2017 1:15 PM By: Stu Campaigne 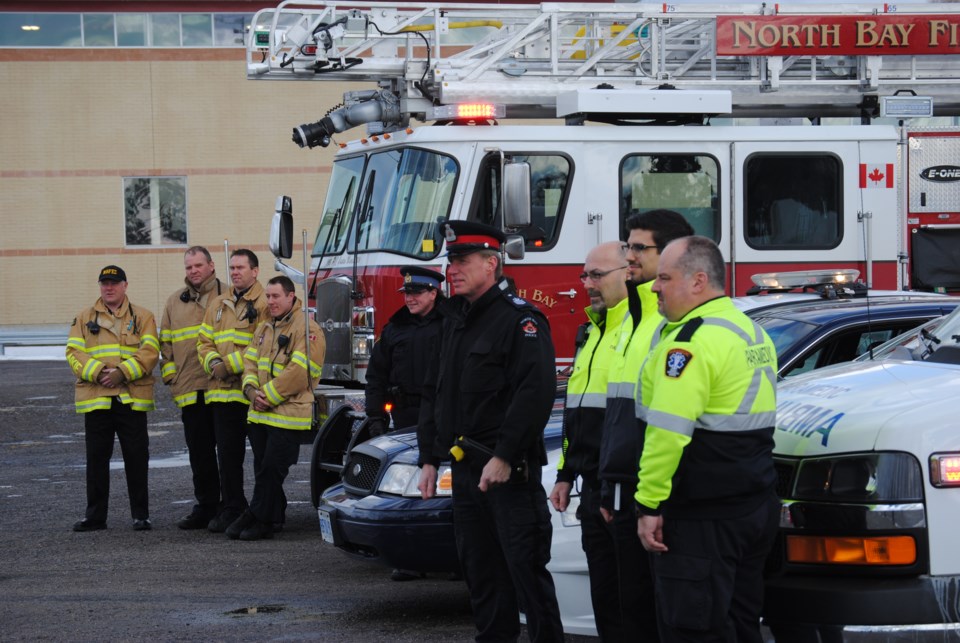 Local first responders were on hand as the North Bay Road Safety Committee launched a pilot project, Wednesday. The first responders will distribute concussion information cards to victims of collisions who decline treatment but may have suffered a concussion. Photo by Stu Campaigne.

When attending the scene of a motor vehicle collision, those are the words that first responders commonly hear from drivers, passengers, pedestrians or cyclists when asked if they have been injured. Many refuse medical treatment without realizing that they may have suffered a concussion. Many concussions do not present symptoms until hours or days after the initial trauma.

According to Pat Cliche of the Ontario Injury Prevention Resource Centre, "This is an educational awareness program for those minor collisions that happen on our highways for drivers that may have sustained a concussion but do not want to go to the hospital.

"It was determined that many people are driving away from the scene of a collision that may have suffered a concussion. We are giving the cards as an educational concussion awareness tool."

A concussion is a head injury caused by excessive, rapid movement of the brain inside the skull. One common misconception about concussions is that the victim must lose consciousness. A delay in symptoms is common. Symptoms typically resolve in seven to 10 days but can take longer in children or youth.

Concussions can also cause cognitive impairment, such as slow reaction times, difficulty concentrating or remembering, confusion, feeling dazed, and sleep disturbances such as drowsiness, trouble falling asleep, sleeping more than usual, or sleeping less than usual.

To combat these potentially harmful circumstances, North Bay's Road Safety Committee is launching a campaign to bring public awareness to concussions. For the next six months, as part of a pilot program, first responders will be providing an informational card to victims of motor vehicle collisions who may have suffered a concussion but have declined medical attention at the scene.

The program will see all participating organizations: North Bay Police Service, OPP (North Bay), North Bay Fire and Emergency Services, North Bay and District Emergency Services, and North Bay's Collision Reporting Centre, track the number of concussion information cards they have distributed. The Ontario Injury Prevention Practitioners Network will collect the results and a final tally will then be communicated to the public.

In addition to the North Bay pilot project, Windsor launched the program in February, and Thunder Bay is looking to join as well, said Cliche.