Two weeks ago I had a chance to meet with Marcel Rheault and his wife, Mireille Morin, the owners and force behind Distillerie Rheault in Hearst, Ontario.

Think about it.  In a small town on Highway 11, almost 1,000 kilometres north of Toronto, this couple has the nerve to start a distillery, and succeed!

When you speak with Marcel and Mireille, you gradually realize there is a spark here and a determination that makes what they are accomplishing understandable.

At 16, Marcel broke his back and was unable, because of the pain, to complete high school at the time. He started working in the logging industry, but did go on as a mature student, and then saw the opportunity to grow cucumbers, using the heat from co-generation along the Trans-Canada Pipeline for his greenhouses.

One day, Ron Gerold, Director of Special Crops with Agriculture Canada, said, “Marcel, the guy that grows potatoes doesn’t make much money, but the guy who makes vodka…”   Marcel wasn’t certain what Ron was getting at, but later that day, riding his bicycle, he had his ‘Eureka!’ moment, and the idea for a distillery was planted.

Aside from opportunity, one of the reasons for getting into this business at home in Hearst was pride, being able to do something others might not believe feasible -and one of the advantages, Mireille explains, is that the longer hours of summer sunlight give significant sweetness to the crops, including the grain they have grown for their spirits.  The Rheaults use Ontario Grade #3 wheat grown in the clay belt, perfect for their needs with its higher starch content.

Another advantage is the purity of the glacial spring water not too far south of James Bay.  A 30 foot well is all it takes to locate pure, sand-filtered water, ideal for their distilling.

And the Vodka.  Marcel is an enthusiastic perfectionist, and he did his research before settling on a recipe for Vodka dating back to the Romanovs with standards set 400 years ago. Rheault is one of only 6 distilleries in the world following these standards, and the only one in North America.

The result is a quadruple-distilled “Alpha” vodka.  The threshold for methane in an alpha vodka is .004%; in the Rheault Loon Vodka there is 0.0% methane, an element responsible for nasty hangovers.

Another feature of Loon Vodka is that 30 litres of milk – which amounts to 15% of the final distillation - are added for fining, removing all impurities.  Marcel explains that the milk gives a meringue-like quality to the flavour and softens the aftertaste.

A final refining step in the process is the addition of purifying silver ions in a liquid form at 350 ml. per 1,000 litres of Vodka.

Marcel’s dedication to making the best Vodka possible is clear in the story he relates of taking a seminar at Michigan State, having first read carefully the two texts the professor had written on distillation.

Soon into the seminar, Marcel was asking questions, and with his third query, the professor said, “Marcel, if I take time to answer these kinds of questions, we will lose everybody else.  Get out of here and meet me in my office and we can go over everything.”  Mireille said that if he had asked one more question, she was going to get up and change seats away from him.  She didn’t want to be sitting next to the “show-off!”

Loon Vodka first took a silver medal at a San Francisco World Spirits Competition, and then double gold at the China Wine & Spirits Awards. In case you’re inclined to be dismissive of China, remember that it is becoming one of the biggest markets in the world, and the Chinese have been buying up properties in the drinks business around the globe,  including Ontario where they have recently purchased Lailey Vineyards which will produce ice wines predominantly.

As careful as they are with production, the Rheaults are equally attentive to marketing.  Marcel explained that preparing a product for listing in the LCBO is about a $40,000 process, and, once on the shelves as a new option, you only have 5 seconds to catch the eye of a potential buyer and have them select your product over another.

The label, designed by Aboriginal Artist Stephen Peltonen, bears the image of a loon lifting off from the waters, while beneath it in the ripples is reflected the stylized native depiction of the bird.

Around the neck you may notice moose tracks, and so in every way the presentation salutes Northern Ontario.

A year ago, Loon Vodka took the “Elsie” for the best “Made in Ontario” product in the whole LCBO catalogue.

In addition to Loon Vodka, which retails in the LCBO for $45.25, Rheault also has listed Sinful Cherry Liqueur, $34.80 for 375 ml. This is the first of their vodka-based liqueurs which are less sweet than many of the candy bombs we are used to.  Using tart cherries grown on the Leelanau Peninsula outside Traverse City, Michigan, the Rheaults have taken direction from Clear Creek Distillery in Portland Oregon with the intention of emphasising fruit over sugar in a more European style of liqueur. The goal is to have a more natural flavour that hits at the perfect mid-palate point, neither too sweet nor too tart.

With the Sinful Cherry, there is a suggestion of cinnamon spice on the finish; I might throw away my maraschinos and try a splash of Sinful Cherry in my Manhattan, instead!

They have also developed two other liqueurs which currently are only available from the Distillery, also $34.80, I believe.  The Blueberry is lush and smooth, with a colour akin to blueberry pie, and is a great expression of the North.

The third liqueur is the Raspberry, and the flavour is unbelievably rich. Just as you’ve swallowed and taken a little breath, there is a burst flavour that reminds you of every perfect raspberry and every piece of delicious raspberry pie you have ever tasted. You just have to try it for yourself.

With their current success, and putting their energies into further distribution in the U.S., one might expect that the Rheaults have enough on their plates, but then I would have to say, “You Don’t Know Rheault!” 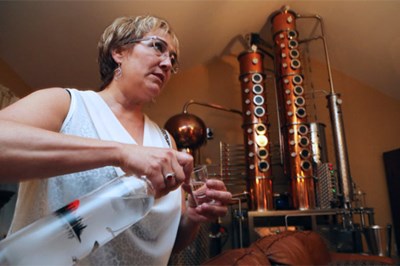 Currently, Distillerie Rheault is readying itself to launch its own Whiskies. Monsieur Gosselin, the mill owner in Hearst who passed away recently, was one of Marcel’s mentors, and explained to Marcel that he had always dreamt of growing grain to do whisky.”  Now, in no small part in his honour, the dream is becoming a reality.

Rheault is developing two whiskies, Single Malt Barley spirits in the Irish style, one using Port barrels, and the other barrels from Jack Daniels. Both finish at 50% alcohol.  The marketing will be intriguing.  The intention is to sell a small 2 litre keg on a stand, along with a two litre “growler” of the “White Dog” un-aged spirits.  The buyer puts the spirit into the keg, and then one is in charge of the aging oneself.

Mireille explained that these small barrels are used in the industry in product development, with one month in the keg being equivalent to one year in the larger 45 gallon barrel. Theoretically, in a year you would have a 12 year old whisky.

The White Dog is sold at 55 percent alcohol, with about 5 percent being lost to evaporation through the wood during the aging process. This evaporation is what is known in Cognac as “the angels’ share.”

The whole package, which should generate about 2 and 2/3 bottles of whisky, is expected to retail for about $165.

The sample I tried of the “Jack Daniels” barrel-based whisky is the palest gold in colour and magnificently smooth. I get a slight caramel sense on the nose, and it is almost too enjoyable.

The spirit aged in the port wine keg has a deeper golden hue edging on amber, and a significantly greater depth of flavour, yet is just as harmonious as the more delicate ‘JD’ example. It also carries a distinct note of smoke on the finish. These are true sipping whiskies.  I think whisky drinkers will soon have something new to cheer about.

Vodka. Liqueur. Whiskey.  All from Northern Ontario, all exceptional.  Rheault Distillery is still very much a fledgling enterprise, but the way things are going, I think we can just sit back and watch it soar.

If you are interested in any of the products not yet in the LCBO, you can contact Marcel and Mireille at 705-362-8263, or by e-mail at mmrheault@xplornet.ca.

Porca De Murça Red 2013, is a very high recommended Portuguese offering, ranking #39 on The Wine Spectator’s “Top 100” for 2015.  A blend of traditional Portuguese grapes, it is earthy and robust with bright ripe fruit and excellent balance, finishing with a soft tannic burr.  All this, and only $14.95.

Gnarly Head Old Vine Zinfandel 2014 is $17.95, but that is for a litre of full-flavoured wine with blackberry and black cherry notes down the centre accompanied by hints of black pepper.

D’Angelo Sacravite 2013, $15.95, an Aglianico from Basilicata in southern Italy, bears a “Parker “91+” and is described as a “soft and approachable”, and “intense”, “pure”, “clean” and “terrific” with “freshness of fruit…[and] round tones of chocolate and toasted hazelnut.” (Sounds like the perfect wine for Nutello lovers)!

Kim Crawford Small Parcels “Rise and Shine” Pinot Noir,$29.95 is unexpectedly deep for a Pinot Noir displaying refined and intense flavours with even an impression of blueberry in the middle. The length and over-all impact are both top-notch.  It is a truly exceptional Pinot Noir.

Mas des Bressades Cuvée Tradition Blanc 2015, $17.95, blends the classic white grapes of the Rhone –roussanne, marsanne, grenache blanc and viognier – to great effect.  It displays grapefruit and tropical flavours with fresh citrus notes and a roundness on the palate.

Concha y Toro Serie Riberas Gran Reserva Chardonnay 2013, $16.95 from Chile receives some oak treatment, but it just adds depth to a wine described by wineandspritsmagazine.com as being “clean, vivid and vibrant” with “electric acidity and ripe tropical fruit” – 90

Tiefenbrunner Pinot Grigio 2015, $22.95 hails from one of Italy’s most northerly region, the Alto Adige, and while the price is up there, too, this is a cut above your regular “PG”, with lifted mineral and citrus notes, some orchard fruit, and a nice interplay of texture and flavours that invites you to take yet another sip.

Cotnari Grasa de Cotnari 2013, $13.95, hails from Romania, the only country growing the Grasa grape, and here we have a botrytis-affected wine with honeyed sweetness but good acidity that calls for blue cheese.  If you are into dessert wines, this inexpensive but decent example should do very nicely.