We may still be a few weeks away from Hallowe’en, but the stores already have their shelves stocked with goodies and racks of costumes for the trick-or-treaters.  The LCBO is no different in trying to cater to its customers at this time of year.

We are starting to see product packaged specifically for the older ghosts and goblins make its appearance, and, because quantities can be limited, it seems like a good time to bring things to your attention so that your Hallowe’en parties will be thematically perfect right down to the labels on the bottles.

What is actually in the bottles isn’t really any different from what you might find year long, but that just means you can count on decent wines for your celebrations. 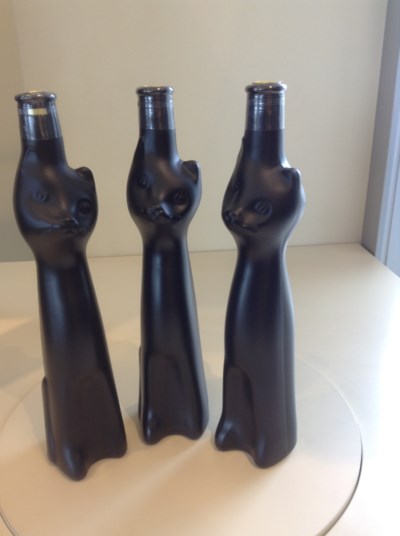 One such product is Moselland Black Cat Riesling, $11.95, an off-dry white from the Rheinhessen region of Germany.  You are, in fact, paying a premium for the totally black, cat-shaped bottle, as it is only 500 millilitres, but considering that you will now have the perfect candle-holders for your Hallowe’en parties to come, it is worth the splurge!

Moselland has long produced the Bernkasteler Kurfurstlay Riesling, $11.10 on the regular list, an excellent medium-sweet value from the Mosel region from vineyards specific to the town of Bernkastel.  Once you have all the cats you need,  I would be buying this one instead.

La Cuvée Mythique Hallowe’en Pays d’Oc, $14.95 has a spooky orange and black label featuring an owl in a pointy witch’s hat, with the bottle sporting a black cape. The wine hails from France’s Mediterranean coast and is a blend of Carignan, Grenache, and Syrah. Displaying dark fruit and herbal notes with good depth and length, this is a good wine in its own right, with the Hallowe’en regalia a bonus.

If you want your Hallowe’en tipple to look a little edgier, the dry Hob Nob Wicked Red Blend, $12.95from France’s Languedoc region is made from Grenache, Cabernet Sauvignon, Syrah and Pinot Noir.  The label features a white skull on a black background with red accents, and the wine is lighter with some spice and cocoa notes.

Also following the skull theme is Dearly Beloved Forever Red, $18.95, from California’s Central Coast, and seems to pretty well contain every red grape grown there except Pinot Noir.  Yes, it’s dry, but the California fruit shines through, along with oak and dark chocolate, in this full-bodies wine. 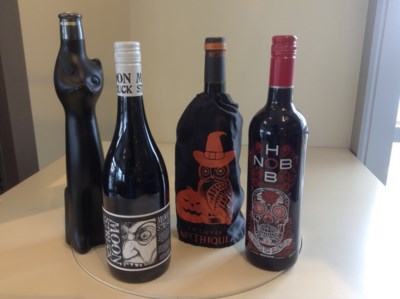 Australia’s Killibinbin Scaredy Cat Cabernet Shiraz, $18.95, pays tribute to the great Alfred Hitchcock, who produced and directed many thrillers including The Birds and Psycho.  Deep and dark, with blackberry, plum, anise and spice, the wine is called “gripping and brooding” by its makers – quite fitting as the image shows a very startled woman clearly in the grip of fear!

The other Aussie entry, Moon Struck Shiraz 2012, $18.95, has about10% Tempranillo to rein in the fruit of the shiraz, so expect good fruit and a dry finish.  The label has a cartoonish vampire image reminiscent of the monsters of Where the Wild Things Are.

Other wines, while not intentionally packaged for Hallowe’en, can still serve well thematically.  Twist of Fate, both the Wine-maker’s Red and the White, has that “Ouija-board, crystal ball” kind of association going for it. The wines are $1 off though Sunday, October 9, at $8.95.

The wines are fairly straight-forward and fruity, smooth and easy-drinking, with the trace of tannin on the finish of the red relieving it of being too sweet.  With the white, the presence of Muscat adds lushness to the blend of Pinot Grigio and Chardonnay.  It is an uncomplicated wine with just enough acidity on the finish to create some liveliness. 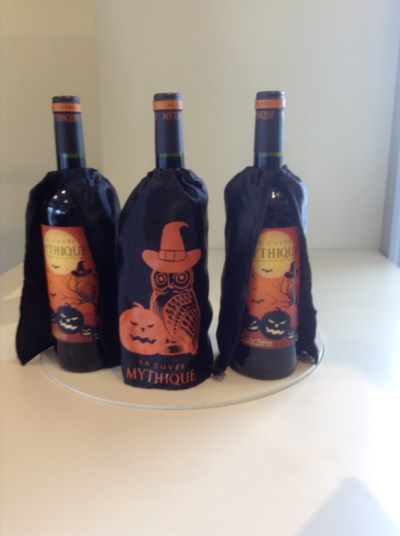 Besieged 2014, $24.95, from Ravenswood will be released on October 15 in Vintages. Three Ravens silhouetted in a night sky grace the label, spooky enough for me.  The wine is a field blend, typical of what the original Italian farmers would have planted in California, and the result, is dark, rich, smooth and delicious. The flavour is mute on entry, but, boy does it explode with black fruit when you swallow – and the emphatic finish lingers impressively. Dracula would tell this wine, “I want to drink you…”

Aside from wine, the Wine Rack stores have a couple of Growers Direct ciders which would be perfect for a Hallowe’en party – they could be enjoyed chilled, served as a punch or even heated.  At just 7% alcohol, they are a milder alternative than most wines.

Both the Apple Cinnamon and the Pumpkin Spice are tasty, with cinnamon, of course, playing a significant part in the flavour of both.  There is some carbonation which circumvents any problem of their being too sweet, and so we have winners all round. At just $7.45 for a litre, this is a savvy buy.  If you can’t wait until Hallowe’en, why not serve it for Thanksgiving?

Speaking of Thanksgiving, The Wine Rack also has two excellent whites from Inniskillin which could accompany ham or turkey with ease.  The Reserve Pinot Gris 2013, $19.95, pops with so much flavour of ripe peach and pear that you might anticipate a sweet wine, but this is actually good and dry with mineral notes at the end.

The Inniskillin Riesling Reserve, $3 off at $15.95 through this Sunday, is definitely on the dry side, with the classic Riesling petrol character detectable on the nose. It is nicely balanced, with some stone fruit flavours carrying through to the end.

Sparkling wines often get overlooked as “food wines” but the Ruffino Prosecco, $16.95, new to the LCBO’s general list, would be a super choice.  There is good effervescence here, and the taste of pear detectable beneath the bubbles.  The wine seems to have more substance, richer flavour, and persistence than many proseccos, which is satisfying, suggesting a depth that would work well with “the bird”.

Columbia Crest Grand Estates Chardonnay 2013 is another possibility, with text-book vanilla oak, caramel, and stone fruit –peach/ apricot.  There is a creaminess here, too, and until next Wednesday, just $13.95 – a $4 savings.

Relatively speaking, the pickings are a bit thin for whites on this release. Unless the stores in your region tend to carry almost everything from each Vintages release, you might want to contact your store byTuesday to put a customer order in for you best chance of getting some of the wines mentioned.

Mas Reserve Marsanne 2015, $13.95 from Domaine Paul Mas is a rarity for us, as we rarely see the Marsanne grape from southern France in our stores.  Marsanne can produce wines that are nutty and deeply flavoured.  Vintages considers this a “fabulous value” with the sensation of apple and pineapple at play.

Saint-Roch Vieille Vignes Côtes du Rousillon 2015, $15.95, is another “rarer” wine to reach our shelves.  Grenache Blanc, with 20% Rousanne, the wine is admired by erobert.parker.com, which calls it “exotic, vibrant…[and] saliva-inducing”.  This, perhaps would be an interesting choice for devotees of Sauvignon Blanc.

Lapostolle Gran Selección Chardonnay 2015, $15.95 has France’s ‘Grand Marnier’s euros behind it, and so quality production is no problem. Expect a rich wine with baked apple and pear flavour, along with good balance and persistence.  The Wine Spectator considered an earlier vintage a top value, and this should be no less.

Vineland Pinot Blanc 2015, $17.95. The world needs more Pinot Blanc.  We seldom see this varietal, but it has a chalky mineral quality missing from other ‘Pinot’ varietals.  The winery suggests it be served with raw oysters, Vintages says with rainbow trout. It has the stone fruit to give the wine balance, and so here’s a wine from the Niagara escarpment to seek out and try. (It may well  be one of those “order in” wines I mentioned.)

As light as the whites choices may have been, there are so many good reds it is difficult to choose.

San Marzano Talò Primitivo Di Manduria 2013, $16.95, is one of two Italian reds bearing “three glasses” from Gambero Rosso magazines.  In other words, it is excellent. (The other is Firriato Santoagostino Baglio Soria Nero d’Avola/Syrah 2012, $19.95…say that three times fast!) Gambero Rosso describes it as “intense and balanced…[with] crisp black fruit and great freshness.”

Domaine Galaman Fitou, $14.95, from France’s Midi sports a “Parker” 90, for being a “fruity forward effort that has loads of texture and richness… offering plenty of mineral-tinged fruit, licorice and toast.”

Palacio de Sada Crianza 2011, $16.95, from Spain’s Navarra region is a Garnacha with a mind-blowing ranking of 95 from Decanter.com –“Well-structured, finely grained, sensual, deep and complex”, they suggest it will drink well for another 9 years.

Hogue Cabernet Sauvignon 2014, $14.95, offers very good value, with grapes sourced from various regions in Washington State to create a wine that the winery proposes is “silky smooth and nicely balanced” with flavours suggestive of “cassis, black cherry and toasty oak.”

Paso Creek Cabernet Sauvignon, 2014, $19.95, from Paso Robles, California, is juicy and intense, with sweet black cherry back-stopped by impressive, refined tannins, resulting in a wine that sings. There is almost a ‘liqueur-depth’ to the fruit.  This is so good I would stand outside in the snow and barbecue a steak to keep it company.